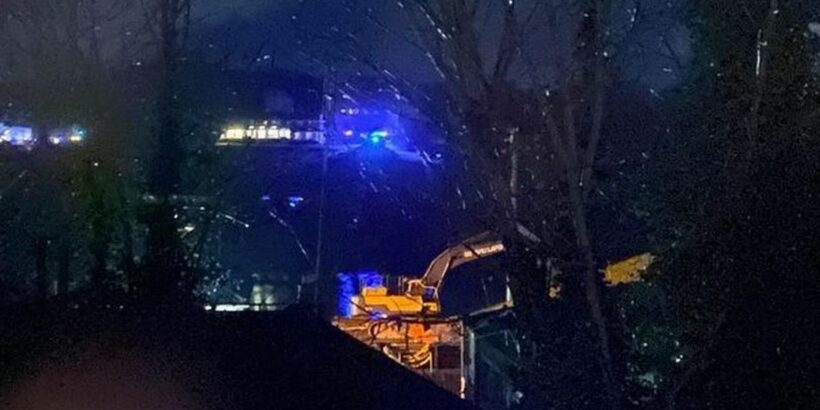 A tree crushed a man to death on a houseboat leaving a friend to desperately save him from being swept up in the rising tide.

Emergency crews from fire, ambulance and coastguard services responded to reports of people trapped under a fallen tree in Sailor's Creek, near Flushing, Cornwall, at 5:30pm on Sunday.

The boat’s owner named his friend who died in the freak accident, Paul Welch but police are yet to confirm the identity of the man in his 50s.

Lee Moody told the Falmouth Packet how he and his partner did all they could to keep Mr Welch alive and safe from the rising tide after a giant oak tree collapsed on top of them.

Mr Moody who survived the incident without injury, said: "The tree fell completely down and smashed our boat up, took our mast down.

"It was like a massive earthquake, then a massive smash.

"I couldn’t get down to help, so my girlfriend went down and was trying to save him with the tide coming in trying to hold his head up out of the water.

"It was coming in around him, he was all crushed."

Despite their best efforts, Paul tragically died later at the scene.

His young daughter is also believed to have seen the tree slam down on her father.

Devon and Cornwall Police are treating the death as a "tragic accident" and said the victim's next of kin have been informed with a file to be prepared for the coroner.

A Devon and Cornwall Police spokesperson said: "Police were called following reports that a tree had fallen and a man on the beach had been Injured.

"The coast guard and RNLI lifeboat also attended the scene and the man was brought to shore where he was seen by paramedics. The man in his 50s was confirmed deceased at the scene, his next of kin have been informed.

"At this time the death is not being treated as suspicious but as an accidental death.

"We are carrying out inquiries today and in due course a file will be prepared for the coroner.

"We're asking for anyone who witnessed the incident to contact the police on 101."