The owners of a new tea shop have been left red-faced after accidentally painting over an early Banksy piece on their shutters.

Jo Xie and Tommy Yuen only discovered their error when they were informed a man had been crying outside the shop over their new paint job.

The couple had hired a workman to give the shutters a new lick of paint unaware the graffiti had such profound significance.

Mr Hamada, who was mid-way through painting the shutters in Bristol on Tuesday, recalled the crying man who informed him of the error. 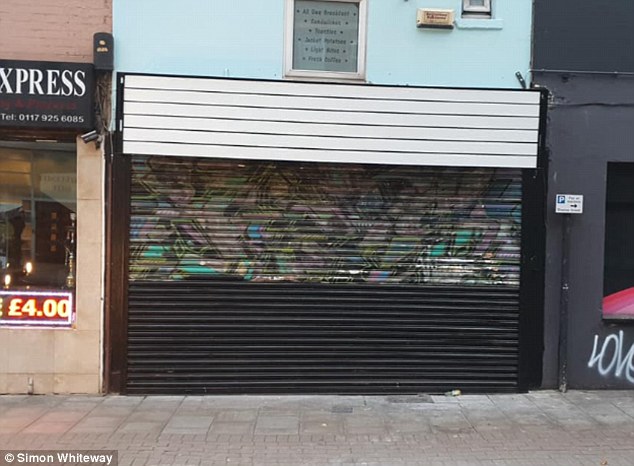 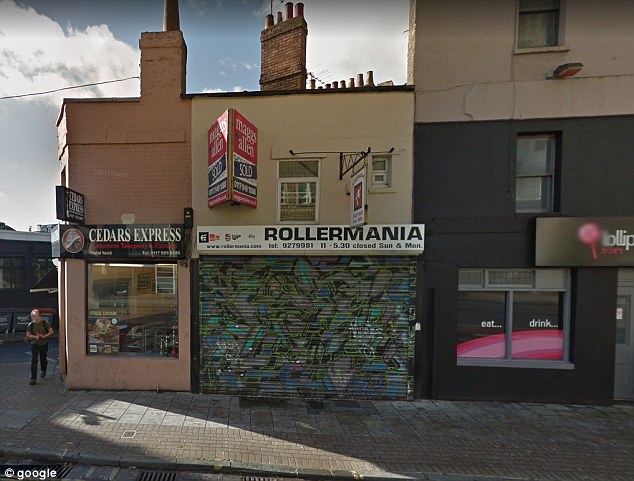 The Banksy mural is believed to have been painted in around 1999. Here is how it looked before it was painted over. Before that the shutters had been covered in graffiti by fellow Bristol artists Tom ‘Inkie’ Bingle and FLX

He told Bristol Live: ‘I came back saw a guy was standing there – he was really upset, like he was crying a bit.

‘I came up to him and I said ‘what’s up? Did I do something wrong?’

‘He told me it was by a famous artist, so I stopped everything and told the landlord.’

Before the couple took over the premises it used to be a Rollermania skate shop – owned by a Tony and Louise Coffey.

But now half of the mural, which is believed to have been painted in 1999, is missing.

Mr Yuen, who thought the graffiti had no real significance, was shocked to discover it had been painted by Banksy.

He told Bristol Live: ‘We didn’t know. As soon as we found out we thought ‘Oh no! We’d better keep it.’

Simon Whiteway, who is a Banksy enthusiast, took to Facebook to share news about the damaged artwork.

He said: ‘One of Banksy’s original freehand murals on a shutter, circa 1999. Now getting painted over today.’

He posted a picture of the now half-missing graffiti and a picture of previous owners Tony and Louise Coffey outside Rollermania.

He continued: ‘Tony told me Banksy used to come in and offer him original artwork in exchange for a few Stussy t-shirts, Tony refused.

‘Hindsight is a wonderful thing.’

But he said it was ‘not one of his better works.’

Ms Xie, who owns the shop alongside her partner Tommy, is now asking people to come forward and re-paint the other half of the mural.

If anyone takes her up on the offer, they’ll have their work directly next to a genuine Banksy.

The elusive street artist is believed to be from Bristol itself and was unmasked by The Mail on Sunday as schoolboy Robin Gunningham in 2008.

But rival theories continue to abound.

Banksy is now believed to be worth around £20million and is famous on both sides of the Atlantic.