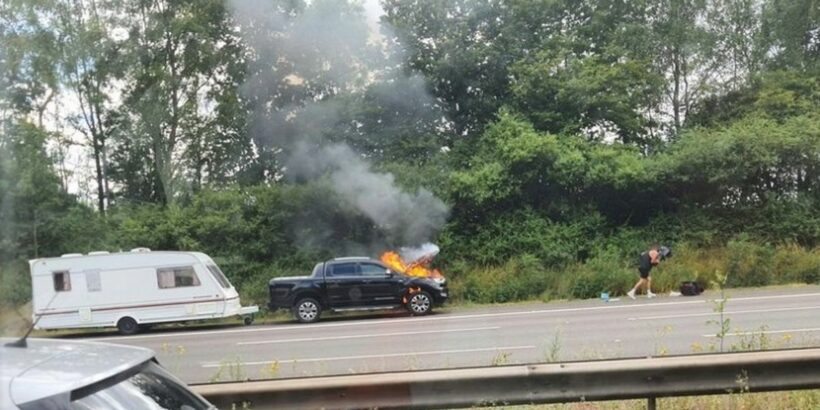 A man dodged death after he managed to escape a burning vehicle while carrying a pram as the fire erupted on a motorway.

The dramatic moment was caught on camera as the driver ran away from the blaze on the hard shoulder in Birmingham on Friday, July 15.

Mal Johnson, who snapped the photo, watched on in horror as the man carried the frame which was connected to a baby seat.

The incident took place at around 3pm as shocked passers-by watched smoke descend onto the M42 southbound between J2 for Birmingham and J1 for Bromsgrove.

Luckily, no one is believed to have been hurt, reports Birmingham Live.

The incident took around six hours to clear and all lanes were reopened just after 9pm.

It has been reported that the vehicle was towing a caravan at the time of the blaze.

National Highways West Midlands tweeted later that day: "Traffic has been stopped on the M42 southbound in #Worcestershire between J2 (Birmingham) and J1 (Bromsgrove) due to a vehicle fire. The Fire Service have just arrived on scene.

"There's just over a mile and a half of congestion on approach.

In an update, they added: "Traffic remains held on the #M42 southbound in #Worcestershire between J2 (Birmingham) and J1 (Bromsgrove) due to a vehicle fire.

"The fire has now been extinguished, and we're hoping to get lane 3 open shortly. There's 4 miles of congestion and a 45 min delay on approach."

National Highways West Midlands confirmed six hours later that the incident had been cleared, with all lanes reopened.

They thanked everyone for their patience and said there would be no more delays.