Children’s book-writing parish councillor, 42, is shot in head and woman, 40, is injured after attack in his cottage in upmarket Hampshire village by biker, 34, who then died in police chase as he fled

A children’s book-writing parish councillor was shot in the head near his cottage in a leafy Hampshire village yesterday, before the gunman leapt on a motorbike and crashed and died while fleeing from police.

Police confirmed that James Nash, 42, suffered serious head injuries after the shooting on MacCallum Road, Upper Enham, and a woman, 40, was also assaulted at the scene and suffered minor injuries.

Her identity is unclear but Mr Nash lives with his wife Dr Sarah Nash, a top scientist who works at a laboratory that builds space equipment.

The gunman, 34, fled the scene after the shooting, leaping on a motorbike and dodging police officers who swooped on idyllic Upper Enham yesterday afternoon.

The rider later crashed on the A343 in Hurstbourne Tarrant, three miles from the scene of the shooting, and was declared dead at the scene.

The gunman is thought to have been known to Mr Nash, though their exact relationship is unclear.

A home in Enham Alamain, just half a mile from Mr Nash’s home, was searched as part of the investigation. 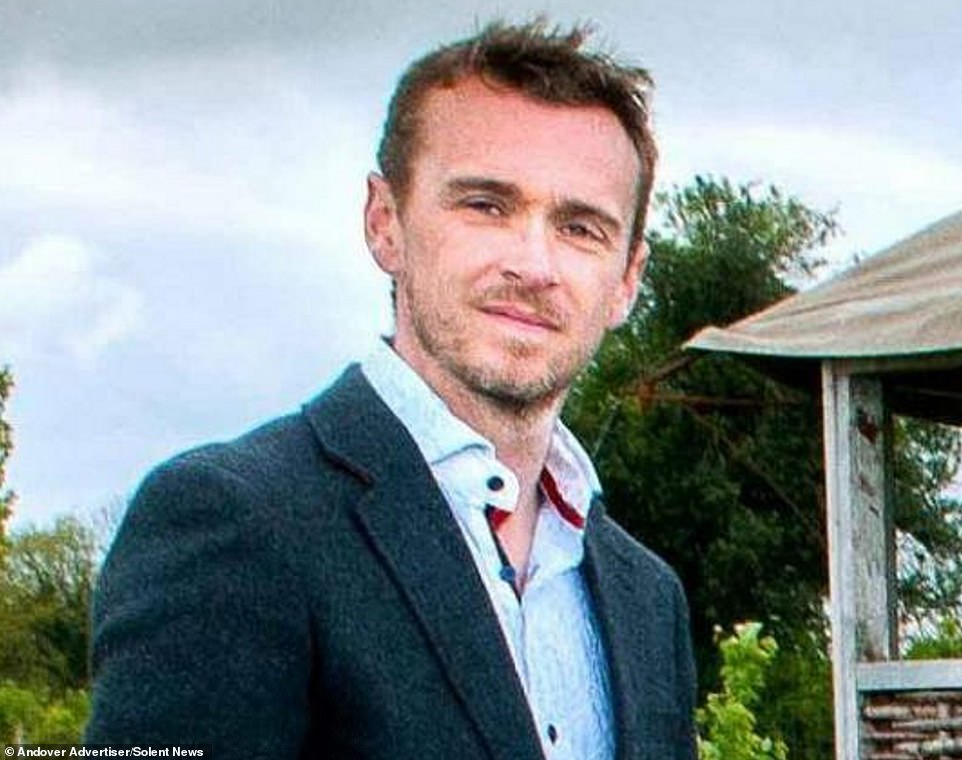 Locals said James Nash, whose wife is a top space scientist, is in hospital being treating for gun shot wounds following shooting in Upper Enham yesterday

A woman, 40, was also assaulted at the scene and suffered minor injuries. It’s unclear who the woman is, but Mr Nash is married to top scientist Dr Sarah Nash 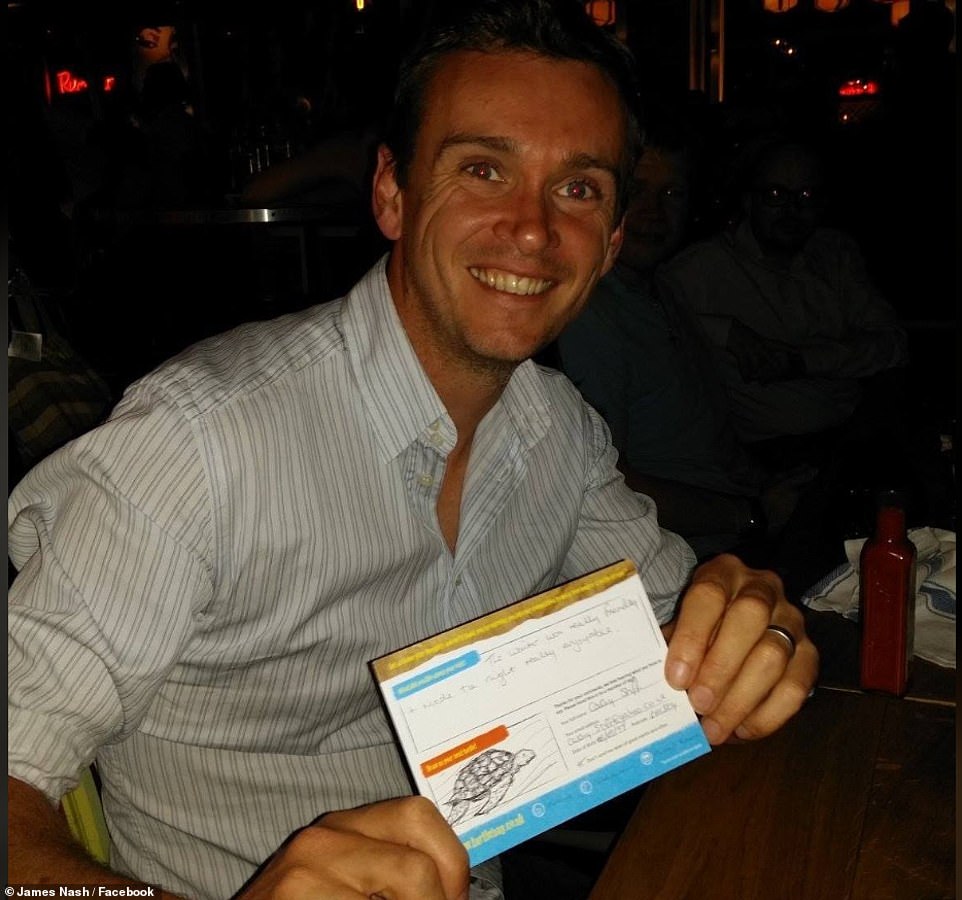 The gunman is thought to have been known to Mr Nash, though their exact relationship is unclear. The councillor suffered serious head injuries 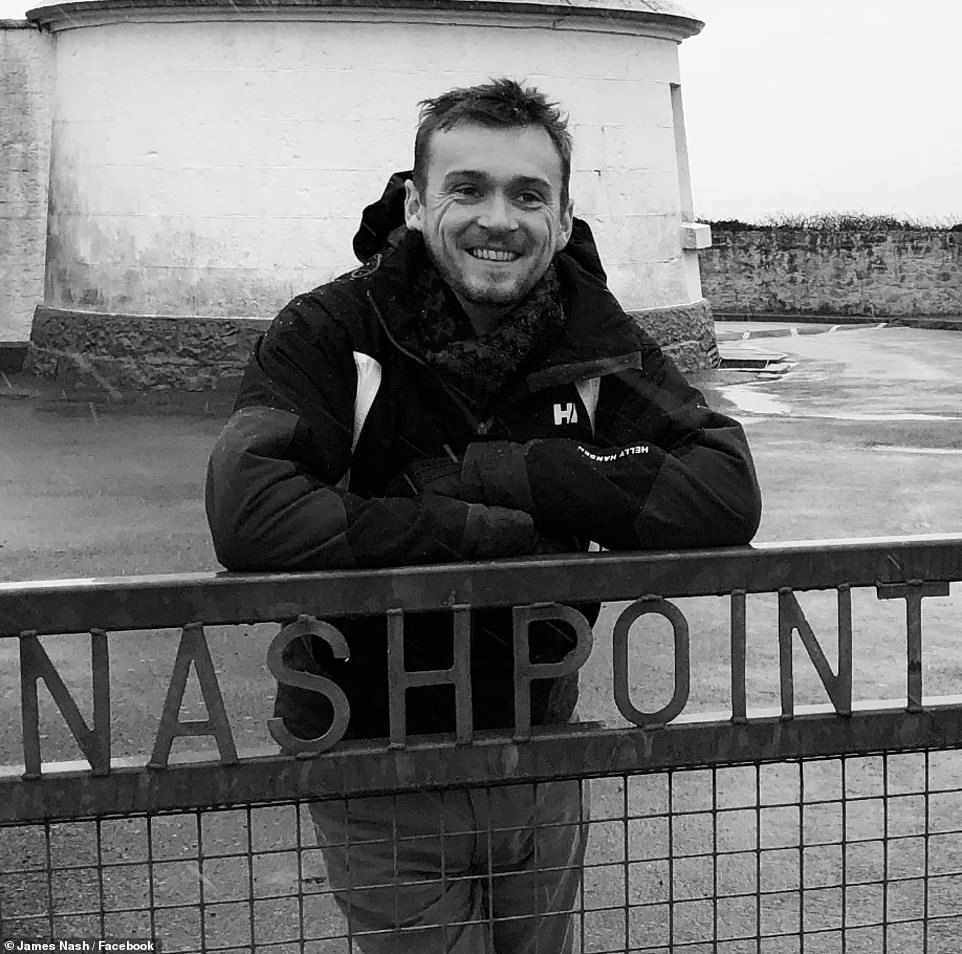 Mr Nash lives with his wife Dr Sarah Nash, a top scientist who works at a laboratory that builds space equipment 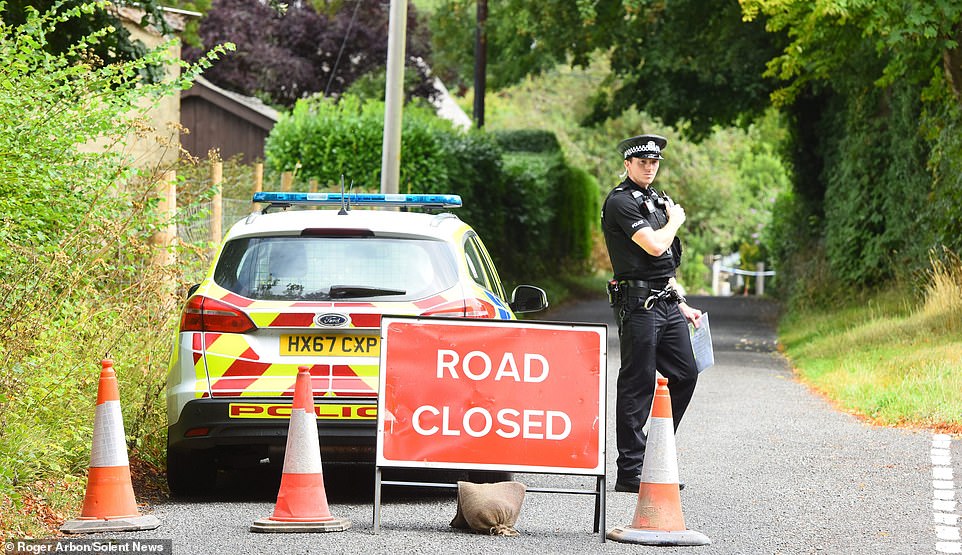 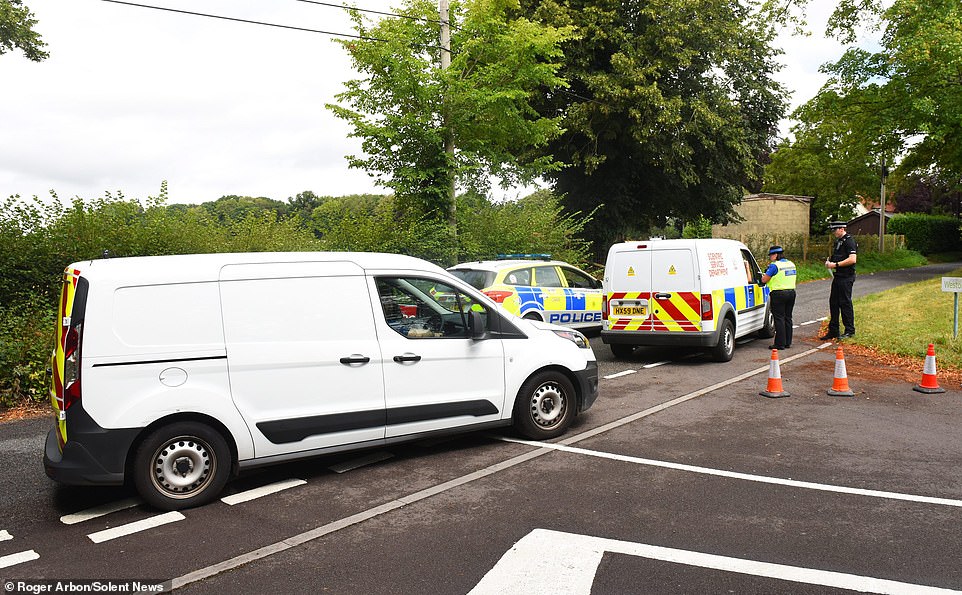 Police gave chase after the shooting suspect, who is believed to have initially left the scene on foot before jumping onto a motorbike, was seen fleeing the area. Pictured: Police forensic teams were at the scene of the shooting today 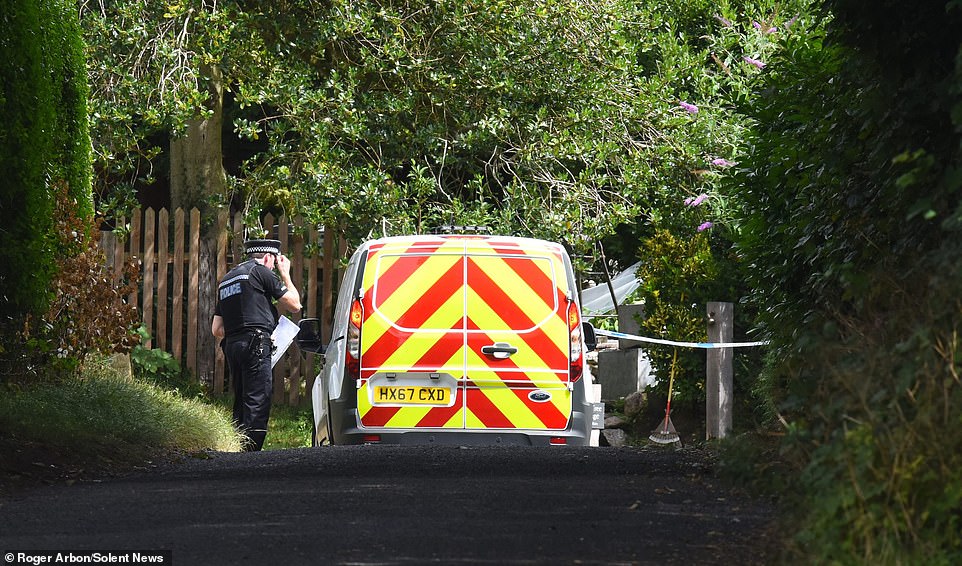 A forensic van was seen earlier today pulling up outside a police cordon in MacCallum Road, Upper Enham, where the shooting took place 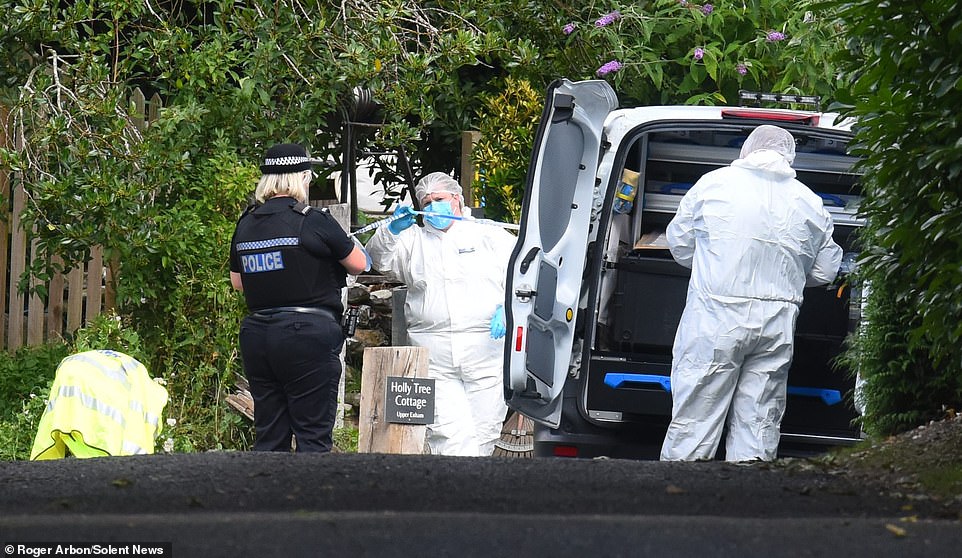 According to a local council chief, police believe the rider was responsible for the shooting and officers ‘are not looking for anyone else’. Pictured: A police forensic team at the scene of the shooting in Upper Enham 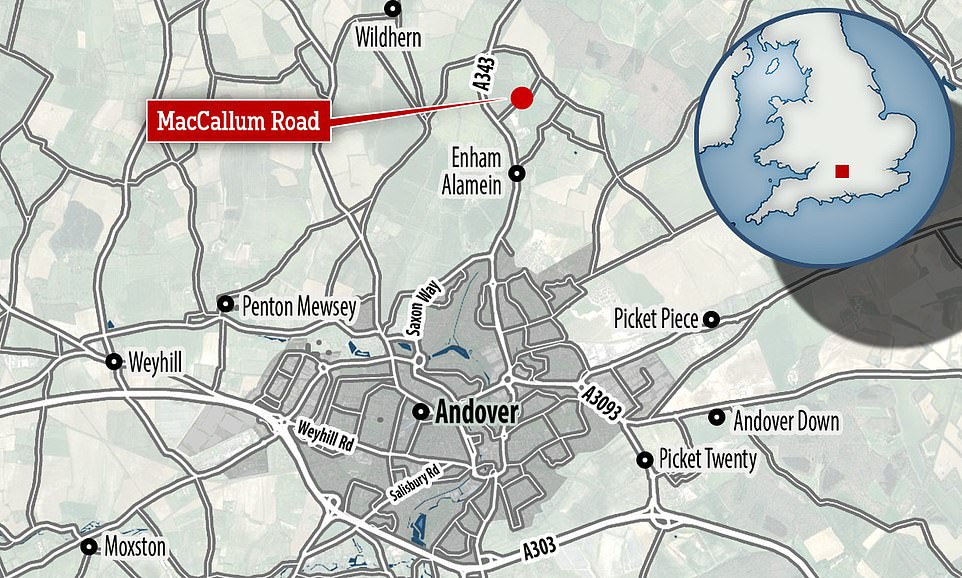 The crash site was three miles from the scene of the shooting, in MacCallum Road, Upper Enham. The rider died at the scene of crash, police say

Officers ‘are not looking for anyone else’ in connection with the shooting.

Mr Nash, who is a councillor for Enham Alamein Parish Council, and his wife live in a detached two bedroom cottage in Upper Enham.

He was named as the victim by a resident who lives nearby and is said to be an an active councillor who has been heavily involved with the local community.

Speaking of Mr Nash, the resident said: ‘I know the guy that got shot. He writes children’s books and he is an artist. I know of him and I have spoken to him but I don’t know him as a friend.

‘He is a lovely guy. He would literally do anything for anyone. He helps out with lots of things.

‘A few years ago we had a Fair and he was asked because he had a tractor to come and help out. He is a really nice person whenever I have spoken to him.

‘He renovated his whole house recently and it looks very modern.’

Meanwhile, his wife Dr Nash works at the Science and Technology Facilities Council in Didcot in Oxford.

The research laboratory is a government agency that carries out research in science and engineering.

Its areas of specialism include particle physics, nuclear physics, space science and astronomy Mr Nash describes himself on his blog as ‘a naturalist, first and foremost devoted to the conservation of our wild world’. 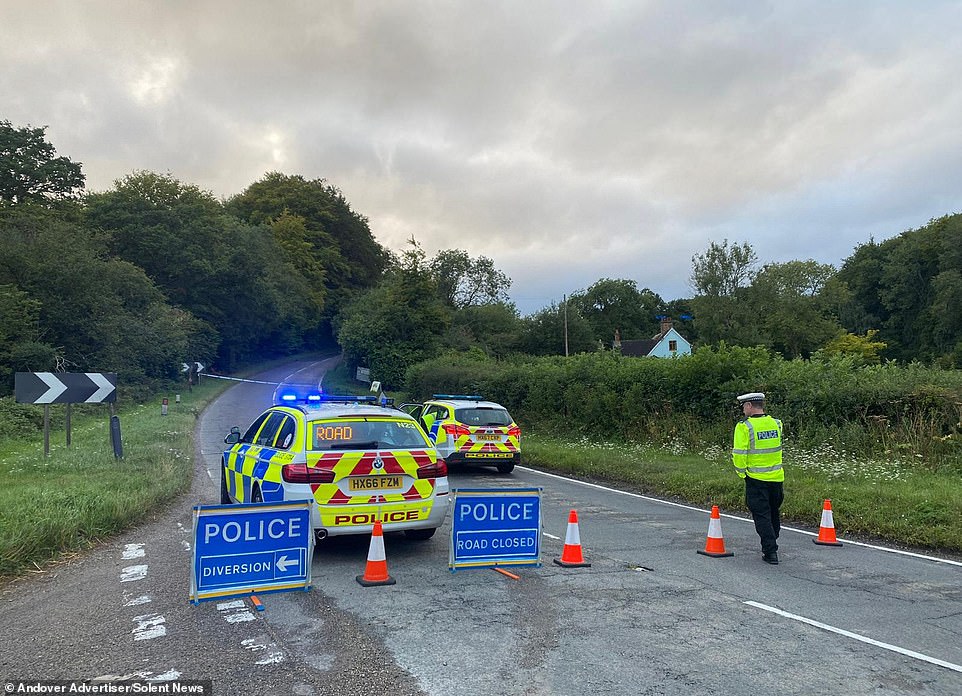 As police raced in pursuit of the motorbike, the rider crashed on the A343 in Hurstbourne Tarrant. Pictured: Police at the scene of the crash 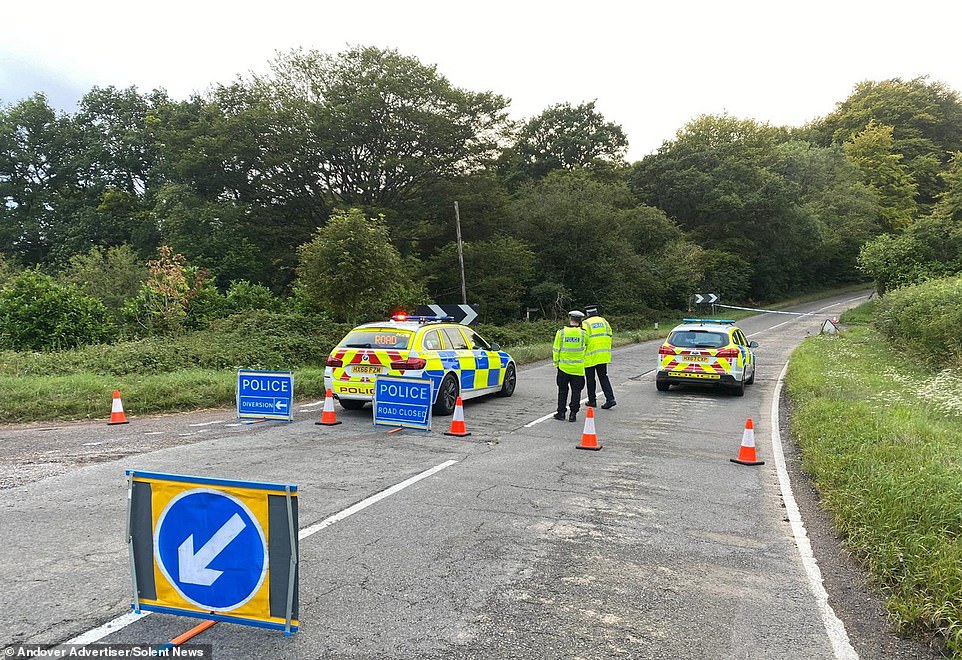 The rider died at the scene of crash (pictured), according to Hampshire Police, who have launched an investigation and referred the incident to the Independent Officer for Police Conduct (IOPC)

The site says he is resident artist at The Hawk Conservancy Trust based in Andover, Hants.

Hampshire Police have launched an investigation into the incident.

A spokesperson for the force said: ‘The man had been shot and sustained serious head injuries. He remains in a critical condition in Southampton General Hospital.

‘A 40-year-old woman was also assaulted during this incident and sustained minor injuries. ‘A motorcycle failed to stop in connection with this incident.

‘A short time later, a motorbike crashed on the A343 near Hurstbourne Tarrant and the road was closed while emergency services attended.

‘The motorcyclist, a 34-year-old man, died at the scene. Next-of-kin have been informed and formal identification procedures are ongoing.

‘A mandatory referral to the Independent Office for Police Conduct has been made in relation to the road traffic collision near Hurstbourne Tarrant.

‘Officers also attended an address in Enham Alamein as part of this investigation. Detectives are continuing to investigate the circumstances of these incidents.’

‘While enquiries into the incident in Upper Enham are at an early stage, detectives do not believe there are any outstanding suspects in this investigation.’

Chief Inspector Kory Thorne, Test Valley district commander, said: ‘We know residents in the Upper Enham and Hurstbourne Tarrant areas will have been concerned by what happened yesterday. 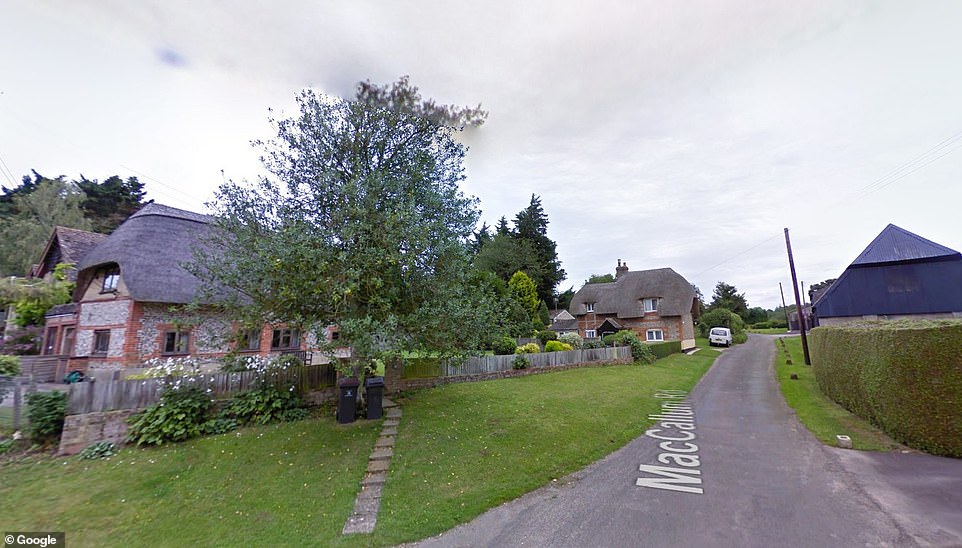 According to a local council chief, police believe the rider was responsible for the shooting and ‘are not looking for anyone else’. Pictured: MacCallum Road in Upper Enham, where the shooting took place 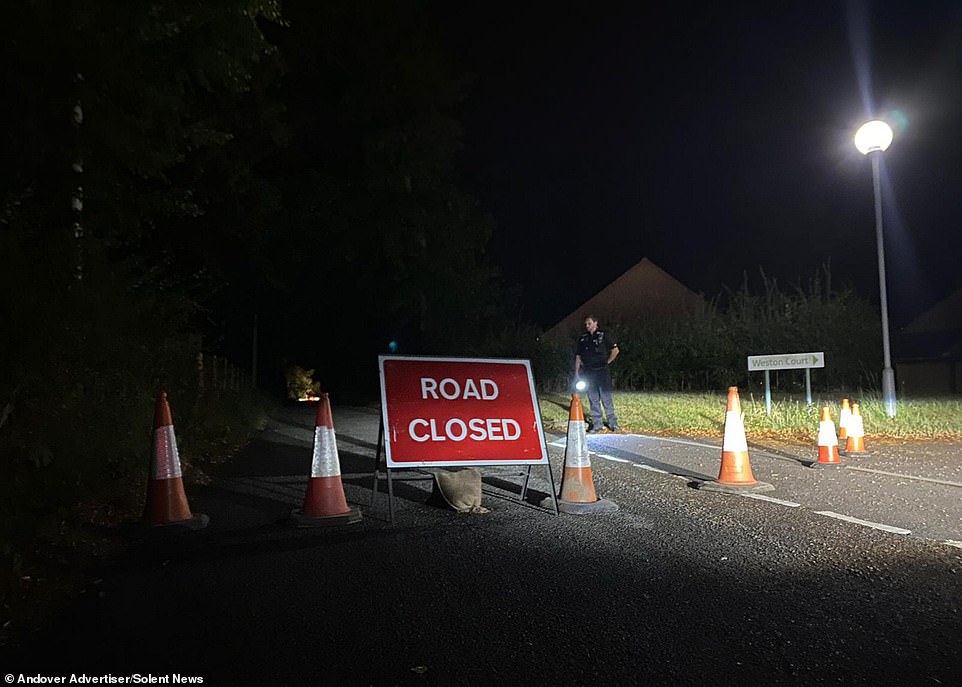 Hampshire Police, who last night closed off a road, say a mandatory referral has been made to the Independent Officer for Police Conduct (IOPC) and that officers have attended a property in nearby Enham Alamein as part of this investigation

‘They are likely to see a continued police presence in these areas while we investigate the circumstances.

‘Officers from our Neighbourhood Policing Team will also be carrying out patrols for added reassurance. If you live in the area and have any concerns, please speak to them.’

An IOPC spokesperson said: ‘We have received a mandatory referral from Hampshire Police relating to a fatal road traffic incident in Doiley Bottom, Andover involving Hampshire Police on Wednesday 5 August. We are now assessing the level of IOPC involvement in any investigation.’

Local council leader Phil North, who represents the ward in which the incident took place in, described it as an ‘absolutely horrible incident’.

‘My thoughts are with the family of the man who was shot – and the communities of both Enham Alamein and Hurstbourne Tarrant.

‘I’ve been informed of some of the details by local sources this evening but I certainly don’t have a full picture.

‘I will hopefully get further information from the police in the morning and that they will be able to reassure local residents.

‘But tonight, let’s all hope that the victim of the shooting makes a full recovery.’

In another post today, he added: ‘I know this will be a very worrying time for the community and until the police complete their investigations we won’t get a full understanding of the incident.

‘The police have confirmed that they are not looking for anyone else though and that they’re confident that the deceased suspect is responsible, which I hope will reassure residents.’