That sinking feeling! Man walks into a CANAL after being distracted by his phone mistaking some leaves for a footpath

This is the moment a man walked straight into a canal he mistook for a footpath after being distracted by his phone.

CCTV footage shows the man walking along the path before turning towards the canal.

He then walks straight into the water, which is covered by leaves scattered on the surface.

Annmarie Gardener, landlady of The Navigation Inn in West Bridgford, Nottinghamshire captured the moment on her CCTV.

She said that she now wants to alert people of the dangers of walking close to the canal while distracted.

The man was later dragged out of the water by two passers-by.

She said: ‘It is not usually a problem – most people know it is a canal. When you watch it he thought because the leaves were on it the canal disappeared and became a path.

‘He was on his phone. We do put warnings out in the pub and tell people to be careful. I think we have had one other person who slipped on the edge but he came back out.

‘When the leaves are in there it can be dangerous. It does worry me and we would like to warn others. It is also deep.’

The Canal and River Trust is warning people to be aware of the dangers lurking around canals during the Christmas period. 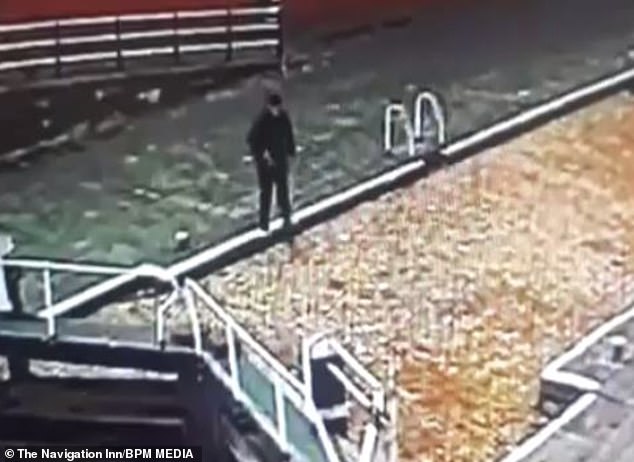 A spokesman said: ‘We’re obviously pleased that this incident had a happy, if soggy, ending, but it could have been a lot more serious and we’d definitely urge people to keep their wits about them when they’re on the towpath.

‘While this kind of incident is unusual we are this week supporting the Don’t Drink and Drown campaign which encourages people to stay safe during the Christmas party season.

‘Our advice at this time of year is to definitely pay a visit to your local canal or river as they’re great places to stay fit, de-stress and relax, but to take extra care.

‘Towpaths can be wet or icy increasing the risk of slipping, tripping or falling into freezing water so stay away from the edge and be careful where you tread.’ 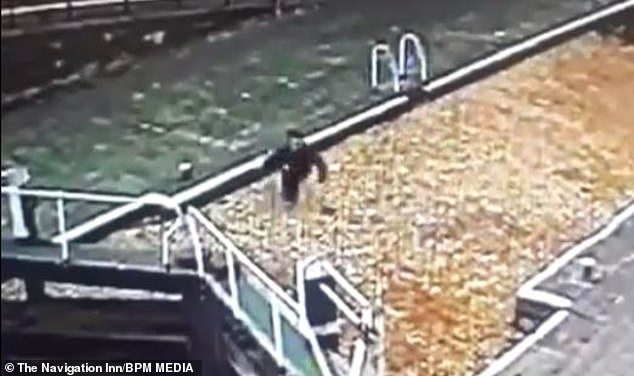 Di Steer, CEO of the Royal Life Saving Society UK, said: ‘People tragically die each year because they’ve entered the water with alcohol in their bloodstream, either deliberately or completely by accident.

‘Drinking near or in water can be a dangerous and deadly cocktail. Alcohol can seriously impede your ability to survive in water.

‘When walking home from a night out, avoid routes that are alongside water, particularly in the darkness, and always stay with and look out for your friends.’