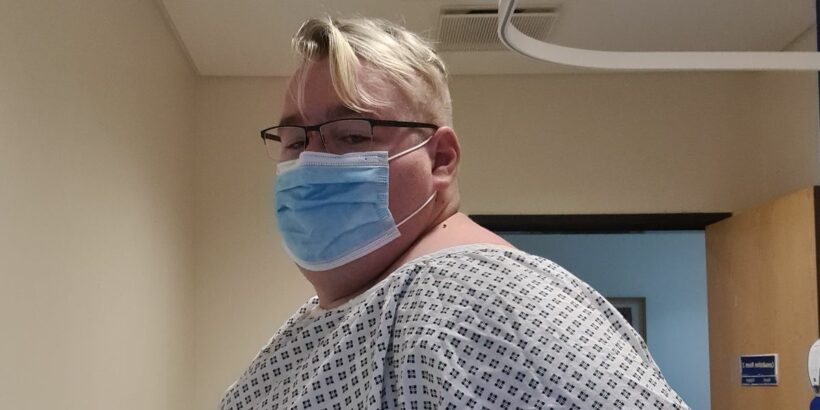 He was spending up to £44 a day on fried chicken meals – plus chips, battered sausages, and kebabs.

At his heaviest, the chef weighed 45 stone.

But since breaking his addiction he is now down to just 13st 8lb.

The 32-year-old said: “I’m a quarter of the man I was a year ago physically, but mentally and emotionally I’m three-quarters stronger.”

Jack looks unrecognisable in snaps taken before and after he quit junk food.

He lost six stone as a result then in November 2020, eight months after changing his diet, he had surgery to make his stomach smaller.

He now fits inside one leg of his old tracksuit bottoms.

Jack piled on weight after being attacked, injuring his back 10 years ago. He says strong painkillers and reduced mobility contributed to his weight gain.

At his heaviest, Jack had to stand on two scales so doctors could read his weight.

He said: “It was the worst feeling of my life – that one destroyed me. In that moment, I’d have gladly died. That broke my soul.”

He struggled with everything from sex to bathing and going to the toilet.

Jack said eating junk food was “10 years of hell”, adding: “I have never had any satisfaction out of grease.”

He now eats porridge for breakfast, two or three pieces of fruit for lunch and a small plate of food at dinner.

Jack, of Eastbourne, East Sussex, said: “I still struggle with certain physical things, but I’m able to go to the gym.

“I’m humbled by the whole experience; without it, I wouldn’t be who I am.”