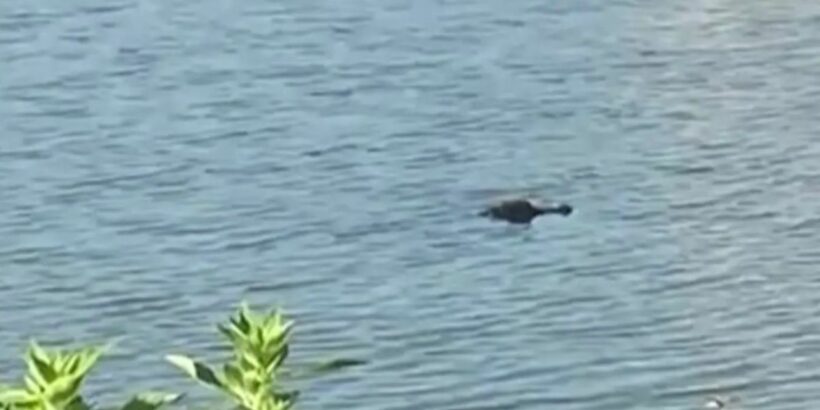 A Florida man saved his dog from the jaws of an alligator as he jumped into a pond and thumbed the beast in the eye.

Mike McCoy was walking his eight-month-old Labrador retriever near a pond behind a high school in Holiday when a huge 9ft alligator popped up from the water and dragged his dog Jake under.

He recalled the terrifying incident, which happened on Tuesday, and described the reptile was darting really fast "like a snake".

In a desperate bid to save his pet, Mike sprang to his feet and jumped into the water to wrestle the alligator to free Jake from the danger.

He told ABC News: "I got around, thumbed him in the eye, picked him out of the water so he couldn't get anywhere until he let the dog go.

Luckily he managed to get out before the apex predator sank its teeth on him.

Mike and his dog Jake were not seriously injured and treated with stitches after the incident.

In the interview clip with local media, Jake has a cone around his neck but looks lively while greeting the reporter.

Mike adds: "He's on the mend. He's full of spit and vinegar today."

He also says he didn't have any hesitation and admits that he didn't think twice about what he did.

The Florida Fish and Wildlife Commission said they estimated the alligator to be between seven and nine feet long and they are working with a trapper to remove the beast from the pond.

Although serious injuries caused by alligators are rare, their website stated, residents should always be aware that "the potential for conflict always exists".