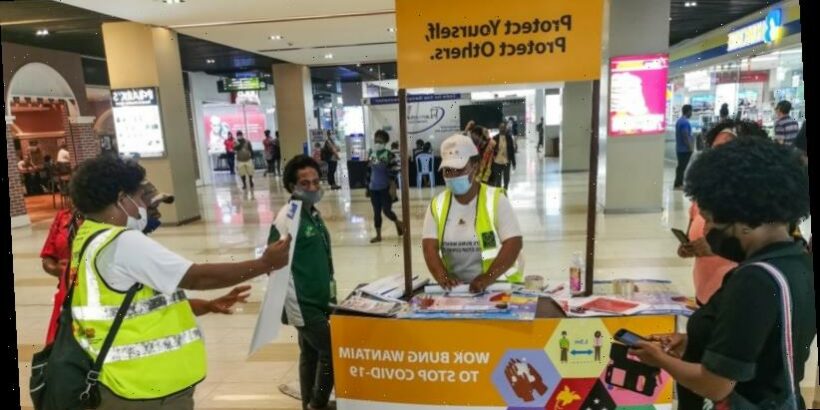 Officials in the Pacific island nation of 9 million people also said they would bar mass gatherings, close schools and may order burials in a “designated mass grave” as part of sweeping measures to slow the spread of the coronavirus.

PNG has recorded a spike in COVID-19 cases in recent weeks, with hundreds of new daily cases. Total cases stand at just under 2500 and deaths at 31, but health officials believe the true numbers are likely much higher. 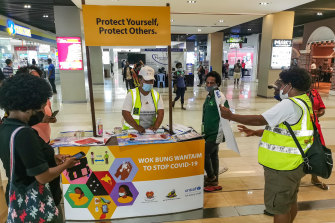 A stand distributes COVID-19 information at a shopping centre in Port Moresby, PNG, in September.Credit:Getty Images

The social distancing measures being imposed from Monday would remain in force until the end of the declaration of the pandemic, unless revoked earlier by officials, PNG pandemic response controller David Manning said in a statement.

“Authorised officers” would be tasked with enforcing compliance and anybody found breaching the rules could be penalised without providing further detail.

Though far-reaching, the measures do not include strict stay-home orders and border closures.

The ban on public gatherings of more than 10 people includes exemptions for religious gatherings of up to 50 if worshippers follow social distancing requirements. Shops can open 13 hours a day and restaurants 15 hours.

Domestic flights are allowed if travellers undertake temperature checks and produce a negative COVID-19 test result. Travel between the country’s 22 provinces can continue for essential business, healthcare and returning home.

State-owned Ok Tedi Mining on Friday began a two-week suspension at its copper mine in the Western Province, the hardest area hit outside the capital Port Moresby.

Australia has pledged 8000 doses of the AstraZeneca vaccine for PNG health workers, and asked the European Union to release 1 million doses of its supply, as local media reported patients being turned away from overrun hospitals.

The Australian government earlier this week suspended travel exemptions which had allowed fly-in-fly-out (FIFO) mining and energy workers to travel between the two countries.

New Zealand Foreign Minister Nanaia Mahuta said yesterday the country was “very concerned by the worsening situation in PNG” and had agreed “to assist where we can” on top of the $NZ6 million ($5.5 million) already provided in coronavirus support earlier.

A NZ Defence Force flight was to arrive in Port Moresby on Saturday with supplies and emergency equipment to treat as many as 1000 patients.