Customs agents found more than 1500 live, exotic turtles duct-taped inside luggage at an airport in the Philippines.

The incident happened Sunday, local time, at Manila's Ninoy Aquino International Airport, according to the country's Bureau of Customs. Officials shared the incident in a Facebook post. 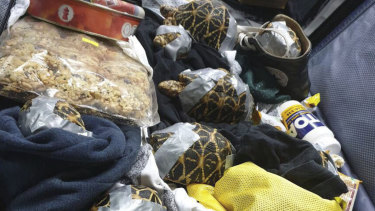 The turtles were left in abandoned luggage in the arrivals area.Credit:AP

The turtles – 1,529 to be exact – were of several different species, including redfoot tortoise, sulcata tortoise and a red-eared slider. They were found inside four suitcases left by a Filipino passenger coming from Hong Kong. Officials said the passenger abandoned the suitcases in the arrival area of the airport.

Authorities said in the Facebook post that they believe "the passenger may have been informed of the vigilance of Bureau of Customs against illegal wildlife trade and its penalties". 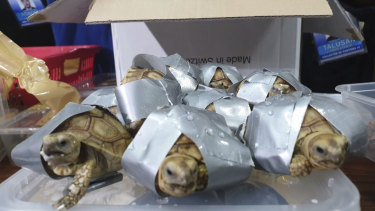 The animals were duct-taped inside the luggage.Credit:AP

It's not the first case involving exotic animals at the airport. In 2018, airport officials confiscated over 250 geckos, plus another 250 corals and other reptiles in bags and parcels. And earlier this year, port authorities said they found 63 chameleons, iguanas and bearded dragons in travellers' bags.