Diego Maradona’s doctor has reportedly been charged with medical negligence and police are treating his death as possible manslaughter.

Police raided the home of the footballer’s personal physician Leopoldo Luque on Sunday and investigators are looking into the actions taken by the medical staff.

The dramatic twist in the probe into Maradona’s death followed overnight reports he had rowed with his personal physician in the days before he suffered heart failure last Wednesday.

Luque is at his home while the search on the outskirts of Buenos Aires takes place. Local TV stations are broadcasting images of police entering Luque’s clinic.

The searches were ordered after Maradona’s daughters Dalma and Giannina gave statements yesterday and questioned whether the medication their father was receiving was appropriate.

Argentinian media are reporting Luque could be questioned as an ‘imputado’, someone who is under official investigation on suspicion of possible mala praxis or negligence, rather than a simple witness. 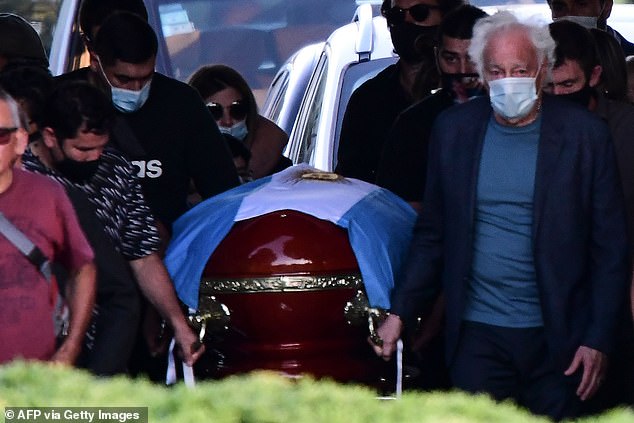 Maradona died of ‘acute lung edema and chronic heart failure’, according to a preliminary autopsy report. He died in his sleep at noon while resting at his home in Tigre, Buenos Aires, Argentina, on Wednesday. Pictured, Maradona’s coffin

Matias Morla said the first ambulance took more than half an hour to reach the rented house north of Buenos Aires where the former Naples and Barcelona star suffered heart failure.

He called the delay a ‘criminal idiocy.’

Mr Morla also complained Maradona had not received any medical checks in the 12 hours before he died, appearing to heap more pressure on the former footballer’s doctor.

On Saturday it emerged Maradona’s nurse had admitted she lied about an early-morning check-up.

The sensational confession added more mystery to the circumstances surrounding his death.

Initial reports pointed to a 24-year-old nephew who was staying with him at the San Andres home being the last person to see him alive over breakfast the day Diego died.

Maradona was one of the most gifted sportsmen of all time, almost single-handedly inspiring Argentina to win the World Cup in Mexico in 1986

He was said to have told his relative ‘I’m not feeling well’ before going back to bed and dying in his sleep before investigators were told he had never got up on Wednesday to eat anything.

Diego’s nephew told investigators he last saw him when he went to bed around 11pm on Tuesday. An uneaten late-night sandwich snack was among the items found in his room by police.

A night-shift nurse told investigators he had seen Maradona ‘sleeping and breathing normally in bed’ around 6.30am on Wednesday.

A report in the hands of state prosecutors heading a probe into the retired footballer’s death, leaked to Argentinian media and signed by a nurse named locally as Dahiana Gisela Madrid who took over around the same time, states: ‘At 6.30am I started my shift and the patient was resting.

‘At 7.30am he is heard moving around inside his room. At 8.30am he continues to rest. At 9.20am he refuses to have his vital signs monitored.’

The health report for private medical firm Medidom is now at the centre of an ongoing probe after the nurse reportedly told investigators she had never entered Diego’s bedroom the morning of his death to check up on him.

Local news agency Telam, citing judicial sources in a report widely echoed in the Argentinian press, said the nurse had claimed in her second statement under oath that she had been ‘made to lie’ for the Medidom report.

‘What the witness added in that second statement is that she was made to write in a report for Medidom, where she is part of the nursing team assisting people receiving home medical care, that she had tried to monitor Maradona’s vital signs when the reality is that she let him rest,’ the report said.

It was not made crystal clear if she was claiming her bosses had obliged her to file the ‘false’ report amid concerns they would be accused of negligence over Maradona’s death, or her hand had been forced by others.

A psychiatrist and psychologist who formed part of Diego Maradona’s care team, named as Susana Cosachov and Carlos Diaz, are said to have entered the room just before midday and made several unsuccessful attempts to revive him before calling 999.

A recording of the call Maradona’s personal physician Leopoldo Luque made to the emergency services, stating he had suffered a suspected cardiac arrest, has already been leaked to Argentinian media.

The former Naples and Barcelona star, who was just 60, was declared dead around midday on Wednesday. Initial post-mortem results revealed the recovering cocaine addict, who also had alcohol problems, had suffered heart failure which caused a pulmonary edema.

Medics are also said to have detected dilated cardiomyopathy, a medical condition in which the heart muscle becomes weakened and enlarged and cannot pump enough blood to the rest of the body.

Pulmonary edema, fluid accumulation in the lung’s tissue and air spaces, are caused by heart problems in most cases.

State prosecutors are analysing CCTV footage of the cameras on the estate where Diego was living and the mobile phones of the nurses who were looking after him in the hours leading up to his death.

Leopoldo Luque was not at the rented home Maradona was using when he died.

A judicial source told respected Argentinian newspaper La Nacion: ‘As Luque was Maradona’s personal physician the decision was taken to search his house and surgery to look for documents that could determine whether, during Maradona’s treatment at home, there were any irregularities.’

Investigators are believed to be searching for details of the medicine being administered to Maradona as well as his health records and other documents that could play a key role in the investigation.

Thirty police and judicial officials are said to be at Luque’s home and another at his work address.