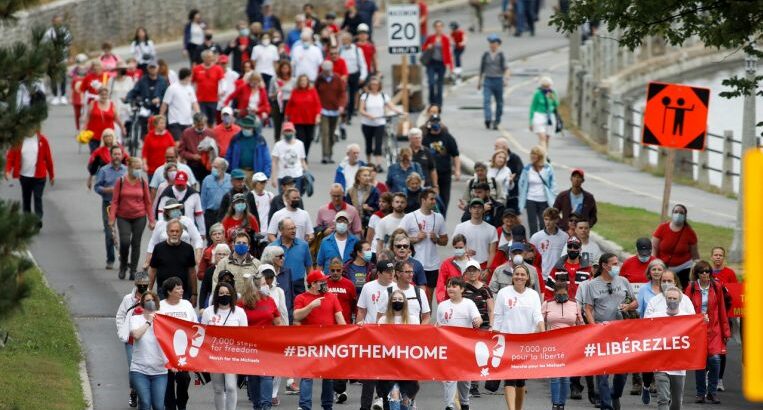 OTTAWA (AFP) – Hundreds of supporters of two Canadian men being held on what Ottawa says are specious charges marched 7,000 steps through the Canadian capital on Sunday to mark the pair’s 1,000th day of “unjust” detention in China.

Similar events in support of Michael Spavor and Michael Kovrig were held elsewhere in Canada and across the world in cities including Brussels, New York, Washington, Seoul and Singapore.

“These are unjust detentions,” Kovrig’s wife Vina Nadjibulla told AFP. “These marches are about solidarity with our Michaels, they’re about honouring their strength and resilience and also calling for action to finally break the stalemate, to bring them home and do everything possible to end this injustice,” Ms Nadjibulla said at the start of the rally.

The two men were arrested in December 2018 and accused of espionage in what Ottawa has said was retaliation for its detention on a United States warrant of a prominent Chinese national, Huawei executive Meng Wanzhou.

A decision is expected in coming months on whether to send Meng to the US to face fraud charges related to alleged violations of Iran sanctions by the Chinese tech giant.

Spavor, a businessman, and former diplomat Kovrig went on trial in March. Spavor was handed an 11-year jail sentence just as final arguments in Meng’s extradition trial got under way last month. No decision has been announced in Kovrig’s case.

The seemingly tit-for-tat arrests plunged Ottawa-Beijing relations into a deep freeze, with Canadian Prime Minister Justin Trudeau calling the charges against the Michaels “trumped up”. On Sunday, US Secretary of State Antony Blinken condemned what he called “arbitrary detentions” by China.

“We stand shoulder-to-shoulder with Canada and the international community in calling for the PRC to release, immediately and unconditionally, Michael Spavor and Michael Kovrig,” Mr Blinken said in a statement, referring to the People’s Republic of China.

The Ottawa rally was attended by Canadian Foreign Minister Marc Garneau and several opposition MPs, as well as the US ambassador to Ottawa.

“This is a difficult milestone,” Ms Nadjibulla, holding back tears, told the crowd. “It’s been 1,000 days – the heartbreak, the pain, the injustice is real. The heaviness, I feel it, we all feel it.” She said her husband had described his ordeal in letters from prison, adding: “One of the things that he does in his windowless, small cell every day is to pace 7,000 steps.”

“He walks in circles, 7,000 steps, often holding a book, reading, reciting songs, prayers – 5km of courage and contemplation. And today, he will not be alone in that walk. We will accompany him, all of us,” she said.

“He knows that this event is happening,” she added. “He knows that we’re with him. That gives him strength.” Michael Spavor’s brother Paul told reporters his brother “spends a lot of his time reading, meditating, doing yoga”.

“One thousand days is a long time,” he said. “Today is just another day, but it’s another day that goes by without our Michaels being back with us.”