MARK ALMOND: We could be on the brink of a cataclysmic Middle East war which would drag in Britain

For much of this year the world has been fixated by fears of nuclear Armageddon erupting over North Korea.

But over the past 48 hours, alarming developments in the Middle East remind us of the even greater likelihood of conventional warfare on a cataclysmic scale in the region.

Now that its heavyweights — Israel and Iran — have traded blows for the very first time, we ignore that threat at our peril.

After 20 Iranian rockets were fired from Syria at military positions held by the Jewish state on the Golan Heights, Israel responded by launching dozens of missiles at Iranian forces in Syria early yesterday.

They hit a radar station, air defences and an ammunition dump — killing at least 23 people, according to the Syrian Observatory for Human Rights which is based in the UK. 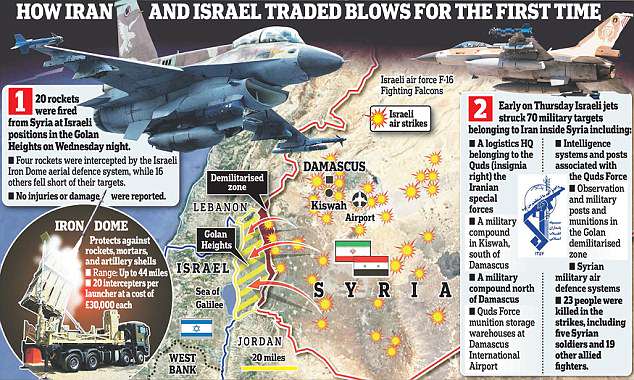 This is not all-out war, but it certainly takes us to the brink. This week’s events seem about to drag them together into a gigantic and highly unstable flash point

Iran’s rockets — fired by the Quds Force, a wing of the Revolutionary Guards — either fell short of their targets or were knocked out by Israel’s ‘Iron Dome’ defence system.

This is not all-out war, but it certainly takes us to the brink.

In the Middle East, two major conflicts have been simmering side by side for years — the Arabs versus the Israelis, and the Shi’ite Muslims against the Sunni Muslims.

This week’s events seem about to drag them together into a gigantic and highly unstable flash point.

Iran, which is not an Arab nation, is the chief Shi’ite power. Since the revolution of 1979 which over threw the pro-Western, modernising Shah and imposed the harsh religious rule of the Ayatollahs, it has been spreading radicalism. The regime detests the West: it refers to America as the Great Satan, and Britain as the Little Satan.

Tanks are deployed near cows close to the Syrian border in the Israel-annexed Golan Heights on May 10.Israel’s army said today it had carried out widespread raids against Iranian targets in Syria overnight after rocket fire towards its forces it blamed on Iran, marking a sharp escalation between the two enemies. Israel carried out the raids after it said around 20 rockets, either Fajr or Grad type, were fired from Syria at its forces in the occupied Golan Heights at around midnight

Iraq is dominated by Shi’ites, as indeed is Lebanon after Hezbollah, the para-military party allied to Iran and which loathes Israel, won this month’s general election.

The Ayatollahs in Iran back the Syrian government of Bashar al- Assad. Surrounded by hostile pro-Western nations, Iran needs all the allies it can find to help protect its regional interests.

Support for Syria also allows it to station forces far to the West of its own borders — closer to the Mediterranean, in fact, than it has been since the days of the Persian empire 1,400 years ago. 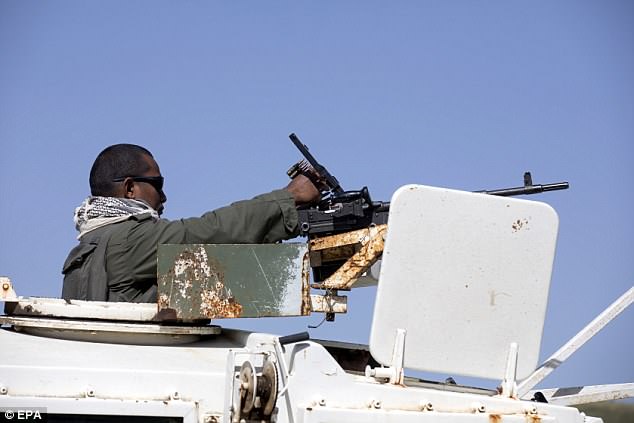 A UN soldier from the United Nations Disengagement Forces loads his machine gun as he stands watch near the Israeli-Syrian border in the Golan Heights, on May 10 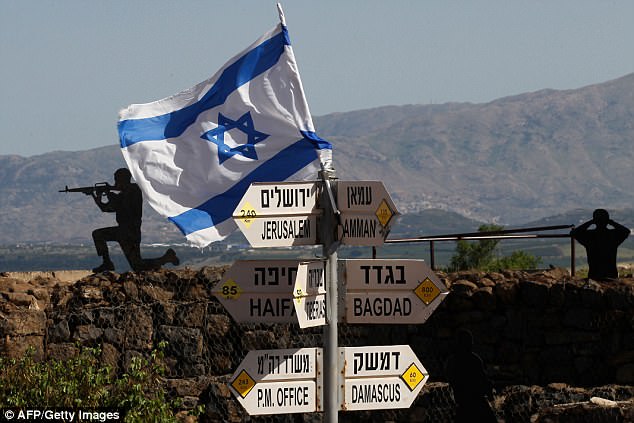 An Israeli flag is seen placed on Mount Bental in the Israeli-annexed Golan Heights on May 10. Israel’s army said today it had carried out widespread raids against Iranian targets in Syria overnight 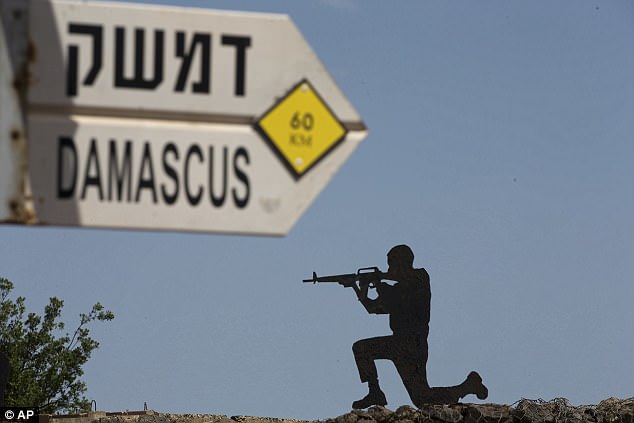 A mock road sign for Damascus, the capital of Syria, and a cutout of a soldier, are displayed in an old outpost in the Israeli controlled Golan Heights near the border with Syria 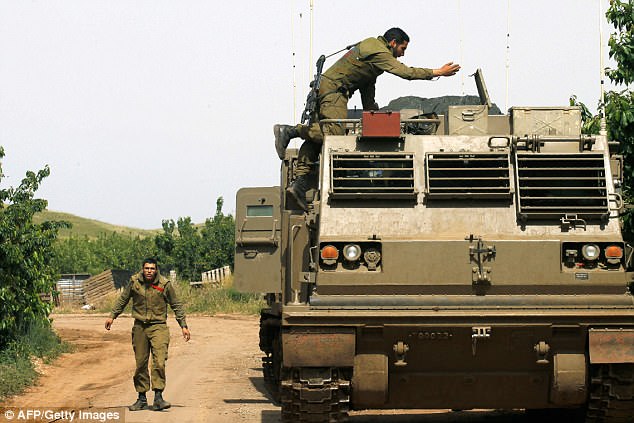 An Israeli soldier climbs on a multiple rocket launcher vehicle, near the Syrian border in the Israel-annexed Golan Heights on May 10. Israel carried out the raids after it said around 20 rockets, either Fajr or Grad type, were fired from Syria at its forces in the occupied Golan Heights at around midnight

Lebanese soldiers inspect remains of a surface to air missile that landed in the southern Lebanese village of Hebarieh, early on May 10. Dozens of rockets were fired from Syria on the Israeli-occupied Golan overnight, a war monitor said, without confirming Israeli reports they were fired by Iranian forces

Those forces, as we are seeing, are within easy striking distance of Israel. But that’s only half the story. Tensions are also at breaking point between Shi’ite Iran and Saudi Arabia, the leading Sunni country. The two nations have been fighting a proxy war in Yemen, with the Iranian-backed forces enjoying most of the success.

However, it is Saudi Arabia and the Gulf states which control a majority of the region’s colossal oil resources. Now, many hardliners in Tehran are saying that, with Iran’s superior military power, it could seize those oilfields if they wanted.

And the ultra-hardliners in Tehran, who are even more numerous, welcome that plan because it would inevitably bring America and its allies (including Britain) into a war they know we wouldn’t have the stomach to fight. With such immense conventional forces arrayed on both sides, Iranian military planners believe the result would, in all probability, be a stalemate. While Iran would be prepared to take hundreds of thousands of casualties, they are betting that the Western allies would not. 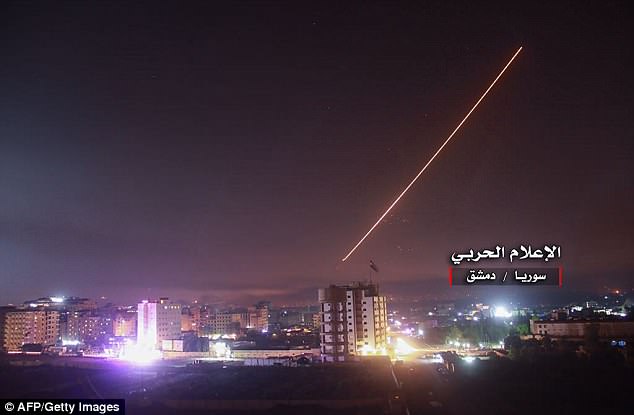 That, bizarrely, would be seen in the Middle East as a win for Iran. If the Great Satan cannot overcome its enemy, its enemy is victorious. No matter how much Europe would want to stay out of another Gulf War, it’s naive to imagine for one moment that it could do so. For one thing, the Americans would expect the support of Britain and Nato. For another, we rely on the Middle East’s oil.

And Britain is already deeply involved, for economic reasons as far as Saudi is concerned, and for moral reasons when it comes to its long-time ally, Israel.

Small wonder, then, that Foreign Secretary Boris Johnson argued so vehemently against President Donald Trump’s decision this week to tear up the 2015 agreement which reduced economic sanctions on Iran in return for a freeze on nuclear development.

The idea of provoking more conflict, and giving Tehran an excuse to restart its experiments with enriched uranium, seems wilfully reckless.

But Trump has a rationale for his action. He argues that his aggressive tactics over North Korea have forced dictator Kim Jong-un to the negotiating table, and kickstarted a process which might even bring about the reunification of the two Koreas.

Absurd as it may seem, suggestions that he is a candidate for the Nobel Peace Prize — as Mr Johnson did at the weekend — should not be dismissed lightly.

When President Obama began talks with Iran to persuade them to abandon their nuclear programme, much was made of an ‘Axis of Evil’ — a loose alliance of Iran, North Korea and other rogue states, intent on global mayhem.

But what Trump has proved in his face-off with ‘Little Rocket Man’ Kim is that Obama’s evil axis is an illusion. North Korea isn’t interested in Iran. Dictators don’t do solidarity.

Trump hopes that by reimposing sanctions, he will force the Ayatollahs back to the table — and this time they will agree not only to cancel their nuclear weapons programme but also to cut back their conventional military forces and to withdraw from Syria.

That’s the goal, but the difficulties with the plan are twofold. Firstly, with America ending the trade deal, in economic terms Iran has nothing left to lose.

In theory, it can still deal with Europe (which continues to support the 2015 deal): in practice, it can’t buy any items that rely on U.S. digital technology, such as the Airbus planes it dearly desires, and it can’t borrow from international banks that have dealings with America (which means all international banks).

Secondly, Iran is not a one-man dictatorship. Power is shared between religious, political and military leaders, all of whom are competing to prove they are more hardline than the next, all of them convinced America isn’t prepared for a ground war fought to the last man.

It’s true that the U.S. does not want to commit ground troops. Israel, too, is anxious to avoid fighting with tanks and assault rifles against an enemy with long experience of guerrilla warfare.

‘We are in the midst of a protracted battle and our policy is clear: We will not allow Iran to entrench itself militarily in Syria,’ Netanyahu said

Later, in a statement issued as Israel’s security cabinet was meeting, Netanyahu said the strike on Iran’s military installations inside Syria sent a ‘clear message’ to Syrian President Bashar al-Assad not to attack Israel

He said that ‘we are in a continuous campaign’ and that ‘Israel’s military had carried out very extensive strike against Iranian targets’ in Syria. Netanyahu said Syrian batteries fired at Israeli forces ‘and therefore we struck them.’

That’s why the Israeli response to Iran’s failed missile attack was so swift and emphatic: ‘If it rains on us, it will storm on them,’ warned Israel’s defence minister Avigdor Lieberman. Iran is promising to respond, though this does not necessarily mean an all-out missile attack. Reprisals could take the form of terrorist attacks, either in the Middle East or further afield.

Whatever happens, we are closer to open war between Iran and Israel, with the Saudis and U.S. potentially being drawn in virtually from the start, than we have ever been.

Is there any chink of hope? Curiously, there is and it comes from an improbable source. Russia, which has been so belligerent over Ukraine and Syria, does not want to see Iran dominate the Middle East where it now has significant interests.

So President Vladimir Putin may hold the balance of power here. It’s worth remembering that the monstrous Russian dictator Josef Stalin was the West’s vital ally in World War II. Significantly, the Israeli PM was in Moscow to mark the Russian victory over the Nazis on Wednesday.

Strange as it may seem, because he can talk to all sides, Putin could be the leader who can avert a Third World War.

Mark Almond is the director of the Crisis Research Institute in Oxford.