Victoria’s mandated mask wearing policy could be scaled back as early as Sunday, with Chief Health Officer Brett Sutton saying on Friday that face coverings were becoming less and less useful in the fight against COVID-19.

But Professor Sutton told a state parliamentary committee on Friday afternoon that final decisions on which restrictions would be included in the next round of easing, to be announced on Sunday, had not yet been made. 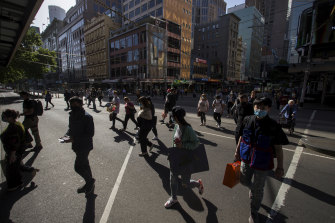 Mask wearing in the city this week.Credit:Paul Jeffers

Health Minister Martin Foley also confirmed to the public accounts and estimates committee that the current State of Emergency which expires on Sunday, was to be extended to enable the enforecement of the new hotel quarantine regime, which begins on Monday.

Answering questions from Liberal Democrat MP David Limbrick – who was fined last month for his part in protest against Melbourne’s lockdown – the Chief Health Officer said his advice to the government on masks had changed and would change again.

“That’s the current state of advice, as well as where it is impossible or where one is unable to appropriately physically distance when outside.

“It is to be determined this weekend, but we will move to a phase where there is even more limited use of masks in public.”

The Chief Health Officer said his advice that would underpin Sunday’s announcement had not yet been "framed definitively".