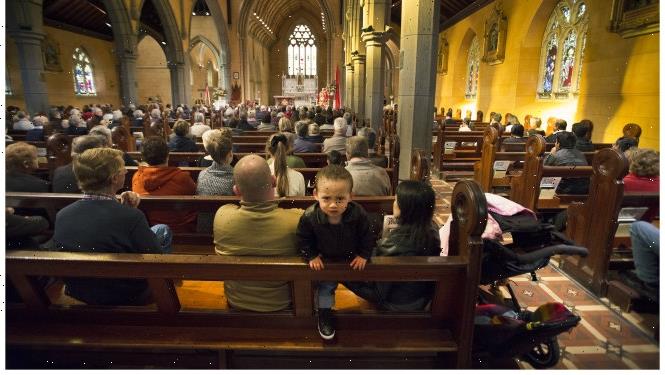 Catholic culture was once one of big families, seemingly chaotic to an outsider’s view but possessed of a rowdy joy by those within it.

With more than enough players for any game, playing at the local park quickly attracted other local children who would slip easily into the throng to chase or field. 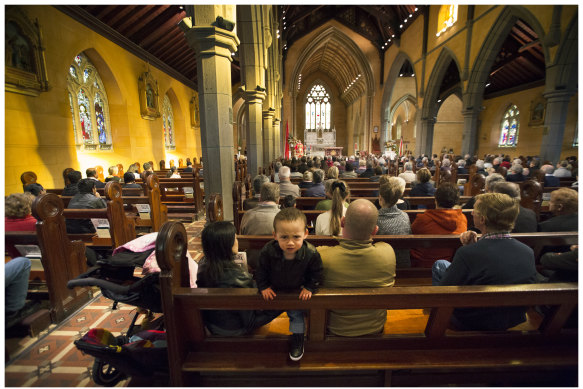 Large families filling entire pews were once commonplace at Catholic Mass. Nowadays, however, many of the most dedicated parishioners are older.Credit:Simon O’Dwyer

Mass was central to Sundays. Families wore their best clothes, filled entire pews and kept siblings in check with a stern glance or subtle hand squeeze. Parents took unsettled babies to what was known as the “crying room”, with glass windows from which Mass could still be viewed while crying toddlers were inaudible to the rest of the congregation.

The time after Mass was for catching up with friends in the community. Parish picnics and dances were opportunities for families to spend time together. Parents from the Catholic primary school became lifelong friends, providing comfort to each other in difficult times.

Easter ceremonies commemorating the death and resurrection of Christ were a sorrowful reminder of the suffering of Christ and also of hope in seeming disaster. Christmas Masses were always packed.

A lesser-known celebration was the crowning of Mary in May, when children were selected to place a circlet of flowers on the head of a statue of Mary, a lasting example of the courage and strength of a woman from early times.

The elders hold up the Catholic community now. They volunteer for reading at Mass and to take communion to the sick. Many are grey-haired and fragile, some on walking frames, but they have a determination that is enviable. They are there at Mass come rain or shine.

I am here, too, sitting in a quiet pew with my family. The setting sun blazes through the windows, bathing me in its golden light and warming my hair. It’s not always easy to get to Mass, but I come anyway.

I am here because in the Mass the world stops for an hour and I open my mind to the presence of God and to the deep peace that He offers.

I’m here because Christ asked us to remember him in the breaking of the bread, and I am trying to keep faith with his small request.

I am here because this is my clan and my culture, and its traditions matter to me.

Melissa Coburn is a Melbourne writer.