Residents of southern villages of Indian-administered Kashmir take to the streets after killing of at least 12 rebels. 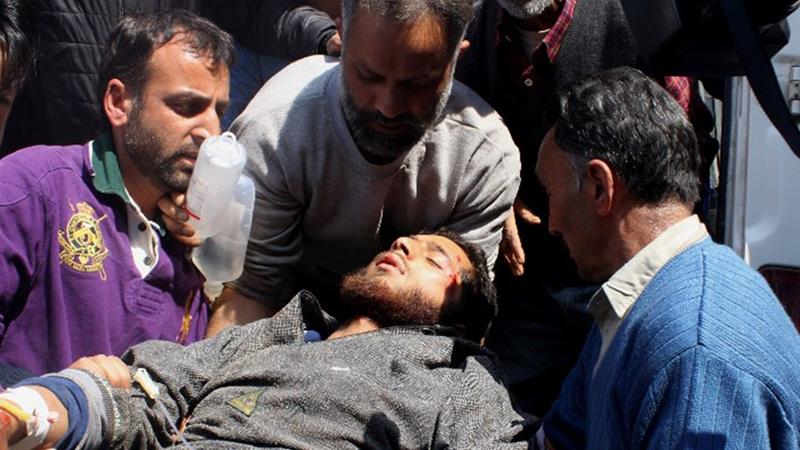 Police said on Sunday the rebels were killed in three separate gun battles in the villages of Dialgam, Dragad and Kachdora.

Swayam Prakash Pani, Kashmir police chief, told Al Jazeera that eight fighters were killed in two gun battles in Dialgam and Dragad. Five more were killed in Kachdora during a standoff that lasted until the evening.

One of the civilians was the house owner in Dragad village of Shopian where the rebels were trapped, officials said.

Police said that among the rebels killed were several top commanders.

At least 25 civilians suffered pellet wounds, while six others were being treated for bullet injuries, according to police. Locals, however, said that the number of those hurt was higher.

To prevent demonstrations, the authorities have restricted access to mobile internet in the region.

Shesh Paul Vaid, the state police chief, told reporters that the gun battle erupted in southern Kashmir late on Saturday and continued into early Sunday after government forces raided two villages following a tip-off about the presence of rebels.

Locals told Al Jazeera that a large number of people from nearby villages took to the streets and marched towards the fighting to help the rebels escape, which then triggered clashes.

“Many civilian homes have also been damaged, leaving them on roads. How long this bloodshed will continue. We are tired.”

The protests have spread to multiple villages in south Kashmir. According to hospital officials, at least three dozen civilians were injured in ongoing clashes between stone-throwing young men and the Indian armed forces.

Separatist leaders have called for a two-day shutdown to protest the killings in the region.

Hundreds of paramilitary troopers have been rushed to the volatile parts of the region, including the main city of Srinagar, to guard the streets and prevent people from taking part in protests.

Business establishments also observed a spontaneous shutdown in many parts of the city.

Wani’s killing in a gunfight led to widespread protests in the region for five long months, during which over 100 civilians were killed, and hundreds lost their eyes to the pellet guns fired by forces.

The beginning of this year has been violent, with intermittent gunfights and civilian killings on the international border.

Cross-border shelling between India and Pakistan has intensified since January, forcing hundreds of villagers along the Line of Control (LoC), the de facto border between the Indian and Pakistani-administered Kashmir, to flee their homes.

Both countries accuse each other of targeting the civilian population.

The recent tensions threaten to bring about another wave of protests in the region.

India and Pakistan have fought three wars over the Himalayan territory, which they both claim in its entirety.

Rebel groups have largely been suppressed by Indian security forces in recent years, and public opposition to Indian rule is now principally expressed through street protests.

Anti-India sentiment runs deep among Kashmir’s mostly Muslim population, and many people support the rebels’ cause against Indian rule.

Kashmir is one of the most militarised regions in the world, as India has stationed about half a million soldiers in the disputed territory.

Tens of thousands of people have been killed in the decades-old conflict.