‘All I Want For Christmas Is… a £250 fine!’: Maths student, 18, faces hefty payout after 50 others join in as he belts out Mariah Carey’s festive hit at university party

A maths student has been fined £250 after 50 others left their university flats and joined him when they heard Mariah Carey’s All I Want For Christmas playing on a speaker in the courtyard.

Elliot Hunt, 18, threw a festive sing-song for his five flatmates outside Durdham Hall at the University of Bristol.

It suddenly swelled to 50 people as students gathered for the impromtu Christmas party – forcing university security to shut it down.

Mr Hunt, from Gowerton in Swansea, said he was just trying to ‘instil festive love’ – and described it as ‘unfair’ as he was only one fined for the sing-song. 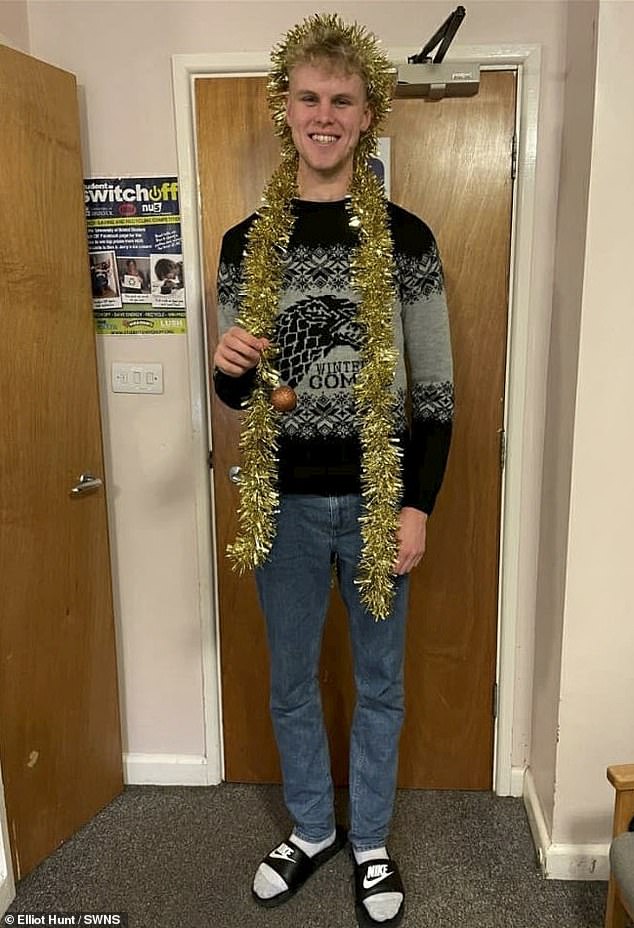 Elliot Hunt (pictured), 18, threw a festive sing-song for his five flatmates outside Durdham Hall at the University of Bristol

He said: ‘We were halfway through Mariah Carey’s All I Want for Christmas song when security shut us down. We decided to play some Christmas tunes in the courtyard of our student halls to raise people’s spirits and instil festive love.’

He was with his bubble of six, and they had all dressed in Christmas jumpers. He said they did not expect a large number of other students to pour into the courtyard.

‘People came out of their flats once they heard the music and joined us. It was probably around 40-50 people and it got a bit out of hand – not what we expected.’

Mr Hunt said he only wanted to bring some happiness to his fellow students before they went home for the Christmas break.

‘As soon as we saw how it was getting out of hand, and in breach of Covid, we tried to stop it,’ he said, adding that he felt the fine was ‘not warranted’ and that he’d been singled out for being the one holding the music speaker at the time. 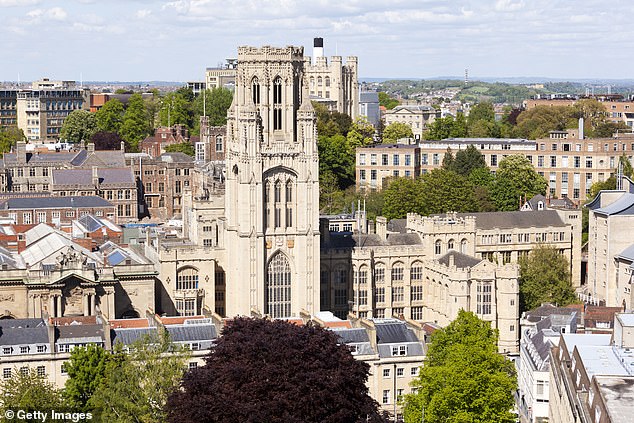 The Wills Memorial Building, part of Bristol University. A University of Bristol spokesperson said there were a ‘number of reports of large gahterings and parties’ over the last two weeks

He later launched a GoFundMe page in the hope others would help him pay the fine, and managed to raise £230 in just a few days.

‘I wasn’t expecting people to donate. I wasn’t trying to pressure anyone because we all enjoyed what happened while it lasted. It was a really nice feeling and a really good atmosphere as not much has happened this year.’

A University of Bristol spokesperson said there were a ‘number of reports of large gatherings and parties’ over the last two weeks.

They added: ‘This included a large party at Durdham Hall on December 1 with music playing via loud-speakers that clearly breached Government and University guidelines on social distancing.

‘A £250 fine was issued to the student considered to have organised the event.’

They said it was ‘completely unacceptable’ to organise or attend Covid-breaking gatherings, which cause some students to feel ‘unsafe in their own homes’.

‘This is especially disheartening as it coincides with a great deal of work to mass test students to allow them to safely travel home to their families for the holidays.

‘We are writing to all students in University residences this week to remind them of the consequences of their actions if they continue to disregard Government and University rules and regulations around social distancing.

‘This includes fines of £100 for attending a party, £250 for organising a party and £800 for repeated breaches. In addition, students’ details could be passed to the police for prosecution. In the most serious cases, students could be suspended or even permanently excluded from the University.’