PM Theresa May calls special cabinet meeting on Wednesday when she will present the text to her ministers. 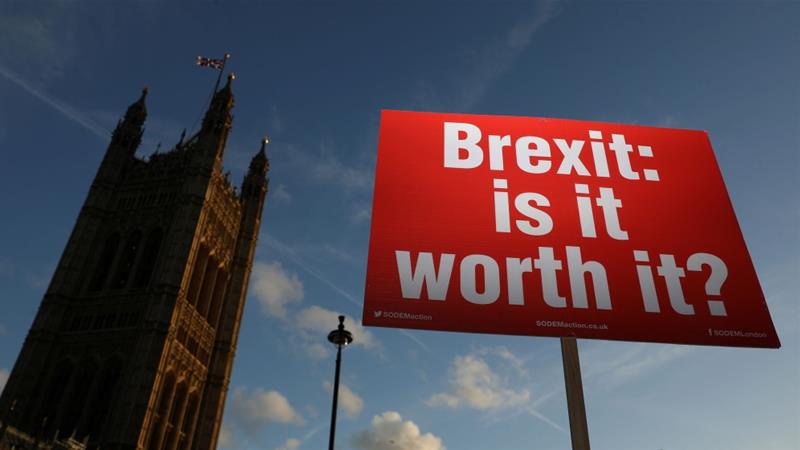 After more than a year of tortuous negotiations, leaders of the United Kingdom and European Union have agreed on a draft text for Britain’s withdrawal from the bloc, or Brexit.

“Cabinet will meet at 2:00pm [14:00 GMT] tomorrow to consider the draft agreement the negotiating teams have reached in Brussels, and to decide on next steps,” a statement by UK Prime Minister Theresa May’s office said on Tuesday.

A European source confirmed to AFP news agency that an agreement has been struck on a “technical level”, but said it still needed political approval in London and Brussels.

Ambassadors from the other 27 EU member states will also meet on Wednesday afternoon, AFP quoted unnamed European diplomats as saying.

EU leaders could meet again on November 25 for a summit to seal the Brexit deal if May’s cabinet approves the text, diplomatic sources told the Reuters news agency.

The UK parliament is likely to vote on the issue in December.

The whole process should end on March 29, 2019 when Britain will officially leave the EU, as determined in a referendum held in 2016.

Meanwhile, the UK’s main opposition parties have written to May demanding she gives parliament “a truly meaningful vote” on the divorce deal agreed with the EU.

In a joint letter, Labour Party leader Jeremy Corbyn, Ian Blackford, leader of the Scottish National Party in the British parliament, and Liberal Democrat leader Vince Cable called for the right to put down amendments before the vote – effectively giving parliament a vote on an alternative path.

“Recent interventions from government ministers have suggested that you and your government may seek to limit or constrain the process on the final vote, in an attempt to muzzle Parliament,” the leaders said in the letter.

“We want to be clear that this would be wholly unacceptable,” it said.

The EU – the world’s biggest trading bloc – and Britain – home to a leading international financial centre – need an agreement to keep trade flowing.,

But May has struggled to untangle nearly 46 years of EU membership without damaging commerce or upsetting legislators, who will ultimately decide the fate of the divorce deal.

Labour, Britain’s main opposition party, said it doubted that the deal will be good for the country.

“We will look at the details of what has been agreed when they are available. But from what we know of the shambolic handling of these negotiations, this is unlikely to be a good deal for the country,” Corbyn said.

Cable said May will fail to get the deal approved by parliament.

“The problem is it has to come to parliament, and all we know about the views of different people across the political spectrum is a deal of this kind is not going to get through,” Cable told the BBC.

Boris Johnson, pro-Brexit Conservative MP and former UK foreign secretary, said the deal is “just about as bad as it could possibly be”.

“But the kicker is – and I think people haven’t really grasped this – the kicker is that we haven’t even really managed to protect the union between Great Britain and Northern Ireland,” he said.

Although details of the deal are not known yet, the agreement will reportedly include a solution to the Irish border issue.

Brussels and London have vowed to prevent the re-emergence of a hard border between the Republic of Ireland and Northern Ireland, a British region which will leave the EU with the rest of the UK, amid fears the issue could reignite decades-old tensions.

But the two sides have so far disagreed on how to resolve the issue.

Last month, May said she was “ready to consider” extending a transition phase after the UK formally leaves the EU next year.

Such an extension, keeping Britain under EU governance with no say in it, would be highly unpopular with hardline supporters of Brexit.

The idea of a one-year extension to the transition period had been proposed by EU Brexit negotiator, Michel Barnier.

Without a solution, the entire divorce deal is at risk, setting Britain on track for an unregulated Brexit that would likely bring chaos and economic pain to both sides.

In October, thousands of anti-Brexit protesters gathered in London to voice their concern about the UK’s planned withdrawal from the EU.

Anti-Brexit campaigners say voters were misled when they voted by a 52-48 percent margin to leave the EU in June 2016.

They also say the Leave campaign’s promises to increase funding for the country’s health service and strike more favourable trade deals with non-EU countries were dishonest.