McDonald’s lovers across Britain wanting to bite into a Big Mac for the first time in almost two months will be able to from early June, it has been revealed today.

The fast food giant has today confirmed that it will reopen all of its drive-thrus by the beginning of next month.

Yesterday the burger chain opened up the drive-thrus of 33 restaurants in the south of England for the first time since March, when all of its outlets across the UK were closed following the outbreak of coronavirus.

But following yesterday’s partial reopening, which sparked anger from fast food lovers in the north of England, McDonald’s has now told the Sun it is planning on reopening the rest of its 1,300 UK restaurants. 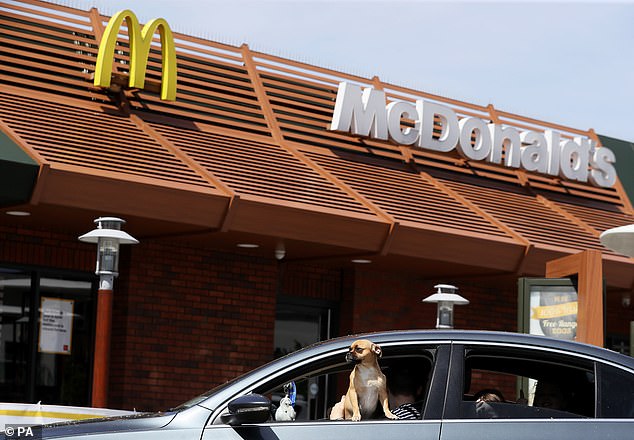 McDonald’s lovers across Britain wanting to bite into a Big Mac for the first time in almost two months will be able to from early June, it has been revealed today

According to reports, the restaurants will reopen in ‘the next two to three weeks’ and it will be confirming details with individual branches next week.

A spokesperson told The Sun: ‘I think delivery will be a bit longer, we’re only one day into resting restaurants running drive-thru and delivery together and it’s SO busy.

‘But we will open some more delivery restaurants up soon (including in the north!).’

McDonald’s closed all of its restaurants in the UK on Monday, March 23 – the day the government announced the country would go into lockdown.

A company spokesperson said at the time that the decision was taken to protect its staff and customers.

But last week the burger chain, famous for its Big Mac and fries, opened 15 stores for delivery only.

Yesterday it opened 33 drive-thrus in England, plus six branches in the Republic of Ireland.

The restaurants are open with a reduced menu, due to having less staff in the kitchen area at one time due to social distancing measures.

But fans of the fast food chain can still get their hands of the chain’s favourites, including a Big Mac, a quarter-pounder with cheese, its famous fries and popular chicken nuggets.