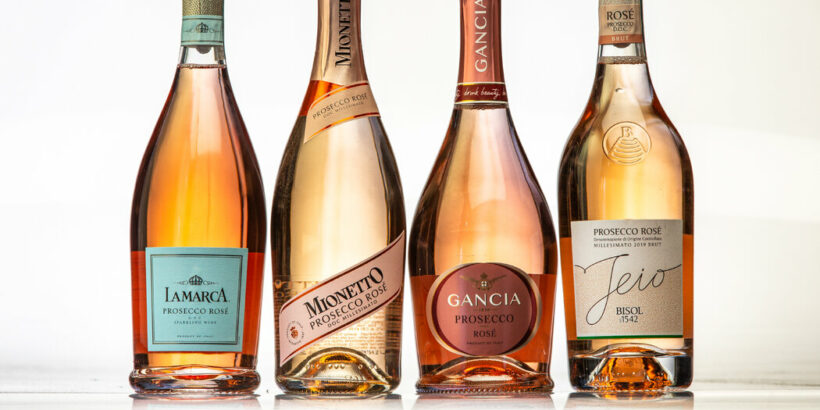 Marry a couple of crowd-pleasers, and the result is a new wine that has success written all over it. Prosecco rosé, which was approved by the Italian government as an official wine category last year, has started arriving in American shops, making it widely available in time for Valentine’s Day. It’s celebratory, easy-drinking, food-friendly and modestly priced enough to make it the evening’s pour.

More than half of the nearly 350 Prosecco producers in Italy have been playing around with a rosé version for years, unofficially, and its arrival to America comes at a good time. The thirst for rosé wines continues to climb in double-digit percentages, in terms of both volume and value. In the first half of 2020, the United States was the leading Prosecco export market worldwide, accounting for about 24 percent, with sales totaling around $150 million. Prosecco rosé might not excite wine snobs, but they’re not the drinkers that drive a mass market.

Though 28 Prosecco rosé producers are currently exporting it to the United States, according to the Prosecco DOC Consortium, a trade organization that helped win the new designation, as of January only a few of the wines are stocked in American shops. Another 19 brands are expected to arrive by the end of the year. Bottles are priced from about $12 to $22.

Unlike many Proseccos, which tend to have more similarities than differences in color, bouquet, flavor and fizz, the new rosés cover a broad spectrum; there are choices to be made. Take color: It can be the palest blush, in the trendy Provençal style, as exhibited by Mionetto and Bisol 1542 Jeio. Others, like Gancia show a deeper magenta-pink. The bouquets tend to be floral — Gancia’s, which also hints of raspberries, was the most assertive of my samples.

The flavor depends on the sweetness, which according to the regulations can range from brut zero, with no residual sugar, to extra dry, with some sweetness.

Most Proseccos produced in Italy are the sweet style labeled (confusingly) extra dry, as are about half of those coming into the American market. Among them is Gancia’s wine, the mellowest of the five I sampled. It’s the one to pour with chocolate cake. The Mionetto, also extra dry, was balanced, with subtler sweetness and a nice touch of fruit, making it fine with an array of foods.

Josh — made by Sacchetto in Italy in collaboration with Josh Cellars, a California wine company, and Villa Pozzi wines of Sicily — was a subtle extra dry with a whisper of tropical fruit. La Marca, another extra dry, was the most full-bodied of my samples, a good choice to serve throughout a dinner. The Bisol 1542 Jeio, a brut, had bright, classy elegance, for a refreshing aperitif.

Prosecco rosé might prove to be a marketing dream, but it’s not a gimmick. Like standard Prosecco, the wines must follow strict rules set by the Italian government.

Prosecco’s regulations have been in place since 2009, when it received the D.O.C., or Denominazione di Origine Controllata, status. The wine has to come from a geographic region that partly encircles Venice like a tiara, to the west, north and east.

The grapes in the rosé blend must be a minimum 85 percent glera, the same as in regular Prosecco, with the addition of up to 15 percent pinot nero (pinot noir) wine, the juice of which is white. Even regular Prosecco D.O.C. is allowed to be 15 percent red vinifera, which is also the primary red grape used in many Champagne cuvées, including most that are not rosé.

Nonsparkling rosé wines are usually made from red grapes, with the amount of skin contact controlling the color — not by adding some red wine to the white. But pink sparklers, most notably Champagnes, frequently get their color by blending in some red wine, the way Prosecco rosé is made.

All Prosecco is vinified using the Charmat or, as it is known in Italy, the Martinotti method, not the Champagne method. The main difference is that the second fermentation, the one that introduces the carbonation, happens in the tank, in bulk, not in the individual bottles like Champagne, making the wine cheaper to produce.

Prosecco rosé’s second fermentation has to last for 60 days, twice as long as for regular Prosecco. The label must show a vintage, with 85 percent of the grapes coming from that year. All the rosés on the market now are from 2019 and 2020. The alcohol is usually a modest 11 percent.

Prosecco rosé is expected to account for 10 percent of the half-million bottles of Prosecco produced this year. Come summer it may be the fizz of choice.