‘All they have to do is speak to me’: Meghan Markle’s defiant father Thomas says he won’t stop talking to the media until he’s a part of his daughter’s life, a day before his 74th birthday

Meghan Markle’s father is not going to stop speaking out about his daughter and the Royal Family – no matter how ‘frustrated’ they get.

Thomas Markle said in an interview on Tuesday that he’s unfazed by reports that the Duke and Duchess of Sussex are fed up with him doing paid interviews with the media.

Thomas, who recently called out his estranged daughter in an interview with the Sun on Sunday, said he won’t stop speaking to the media until he’s allowed to be a part of Meghan’s life.

‘I was silent for a full year and the press beat me up every day saying I was a hermit hiding in Mexico, so I gave my story,’ he told TMZ. 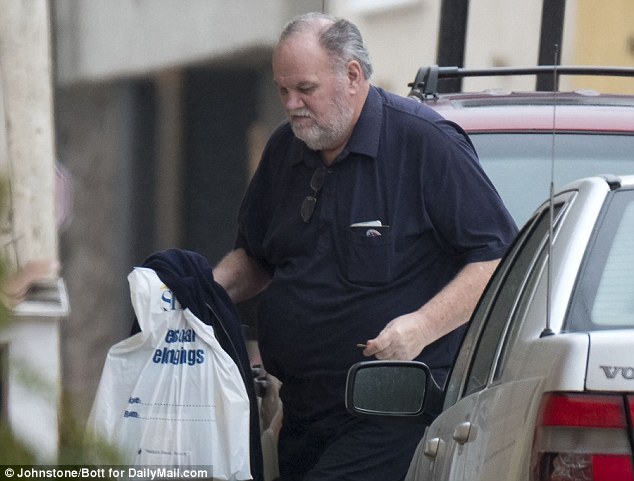 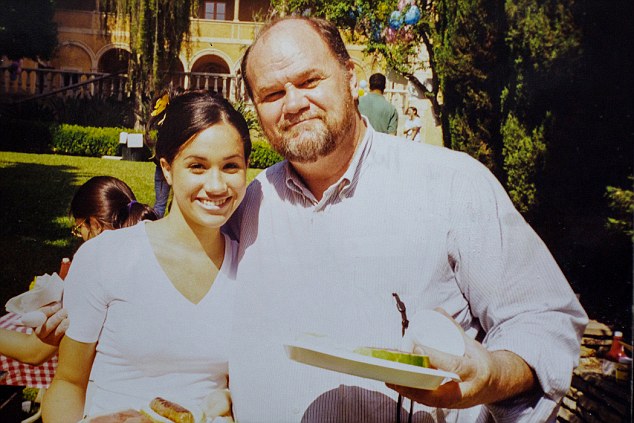 Thomas Markle said he’s unfazed by reports that Meghan Markle and her new husband Prince Harry are ‘frustrated’ he keeps going to he media. Thomas and Meghan are pictured together in happier times 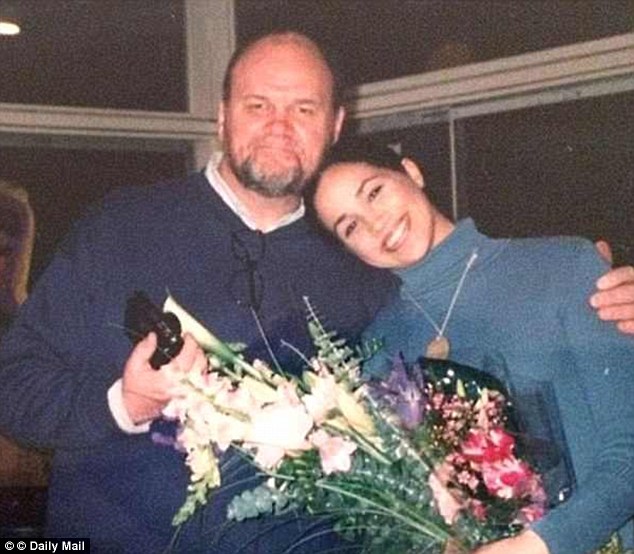 ‘Apparently that interview put the Royal Family in their silence mode … so, I gave another interview to break the silence. All they have to do is speak to me.’

Thomas said he thinks the silent treatment from Kensington Palace is silly and it won’t make him go away.

The Sun reported earlier this week that Thomas has not spoken to Meghan in two months.

‘Tomorrow is my birthday, 74 years old, and I’m enjoying the fact that I can make the entire Royal Family not speak and maybe I can get a laugh out of the Duchess,’ he told TMZ.

A royal source told Entertainment Tonight on Monday that Meghan and Prince Harry were ‘frustrated’ Thomas keeps running to the media ‘and taking payments for interviews’.

The Palace has not released an official statement on the family drama.

In an interview with the Sun over the weekend, Thomas said he thinks the 36-year-old Suits actress is ‘terrified’ of her new life as a royal. 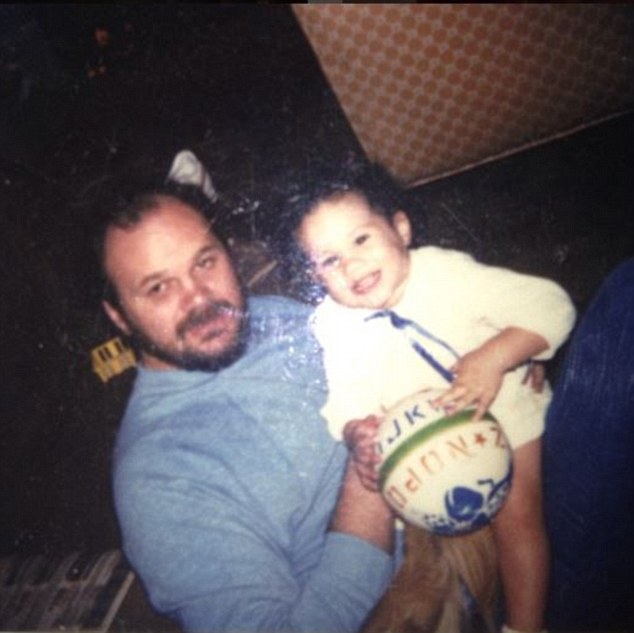 Thomas Markle did an interview over the weekend saying the number he has for Meghan has been changed and he can no longer get in contact with her. Thomas is pictured holding Meghan when she was a baby 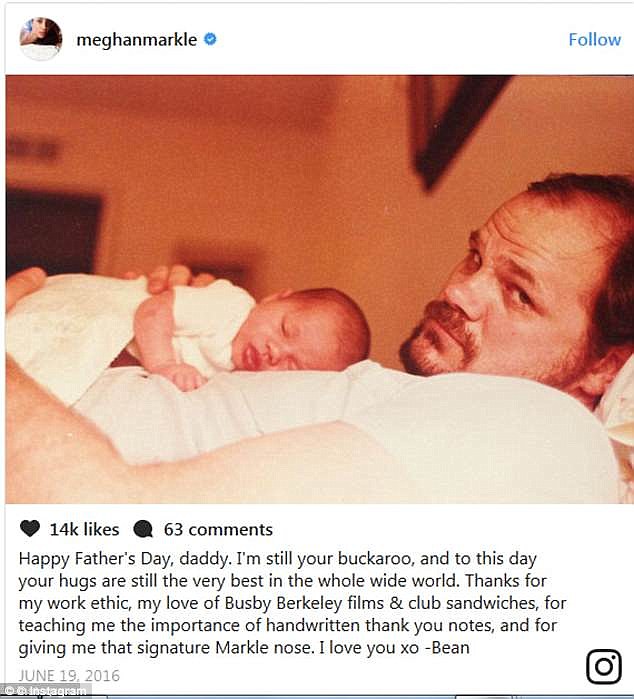 He added: ‘It really worries me. I think she’s under too much pressure. There’s a high price to pay to be married to that family’.

He also claimed that after an interview he did with Good Morning Britain the phone number he had to reach Meghan was changed.

‘The phone number that I call doesn’t work anymore. The, I guess, liaison with the royal family never answers back, and there’s no address I can write to, so I have no way of contacting my daughter,’ the ex-Hollywood lighting director said.

‘My message (to her) would be, “I love you, I miss you, I’m sorry for anything that went wrong.” And I want to be her child’s grandfather and I want to be near them. I want to be a part of their life. I’d like to put our differences behind us, and get together. I miss you very much,’ he added. 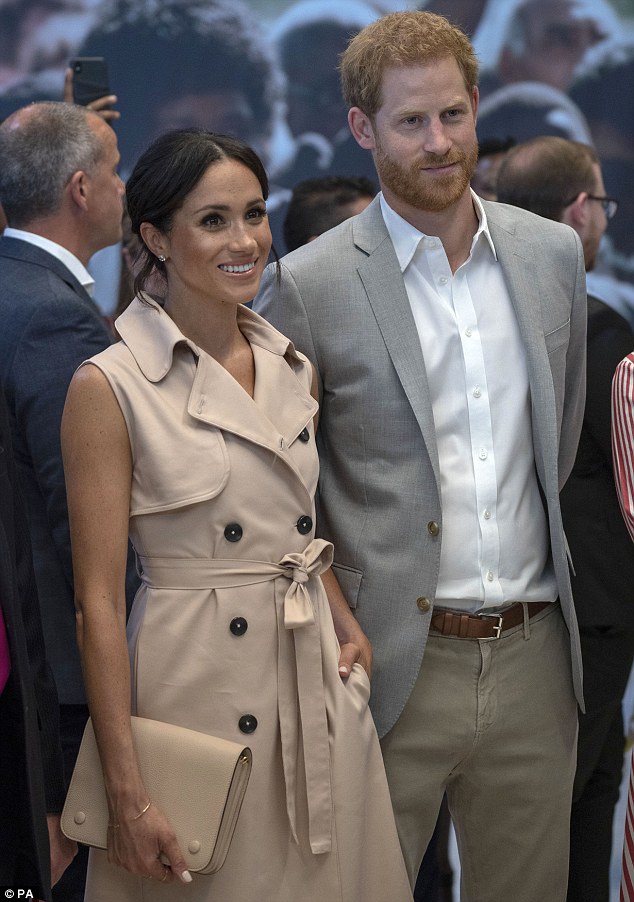 While speaking to Good Morning Britain last month, Thomas appeared a little more apologetic for his actions telling the outlet that he skipped his daughter’s nuptials to Prince Harry on May 19 because he had made a ‘mistake’ staging photos of himself and felt bad that there was so much negativity around it.

‘I couldn’t get over the fact that that had happened,’ he said. ‘All of that was working on me. I’ve got a bit of a heart condition. This pushed me a little further to the point where I had heart palpitations. I had to drive at two in the morning into Rosarito (Mexico) to a hospital. … I had a heart attack’.

Thomas said telling Meghan that he wasn’t coming to her wedding was a ‘difficult conversation’.

‘The unfortunate thing for me now is that I’m a footnote in one of the greatest moments in history rather than the dad walking her down the aisle. That really upsets me somewhat’.