London bound! Meghan Markle’s mom Doria heads to LAX with a Burberry garment bag and gets VIP treatment by using a private entrance – amid speculation she’ll walk her daughter down the aisle

Meghan Markle’s mother, Doria Ragland, made her way to the airport on Tuesday with a Burberry garment bag in tow — as speculation mounts that she will be the one walking her daughter down the aisle.

The 61-year-old yoga instructor and social worker got picked up at her California home before heading to Los Angeles International Airport, where her vehicle was seen going through a private entrance.

The mother of the bride’s luggage was put in the backseat of a black SUV, but she held on tight to her Burberry garment bag — which likely contains an outfit she will be wearing during her daughter’s wedding weekend. 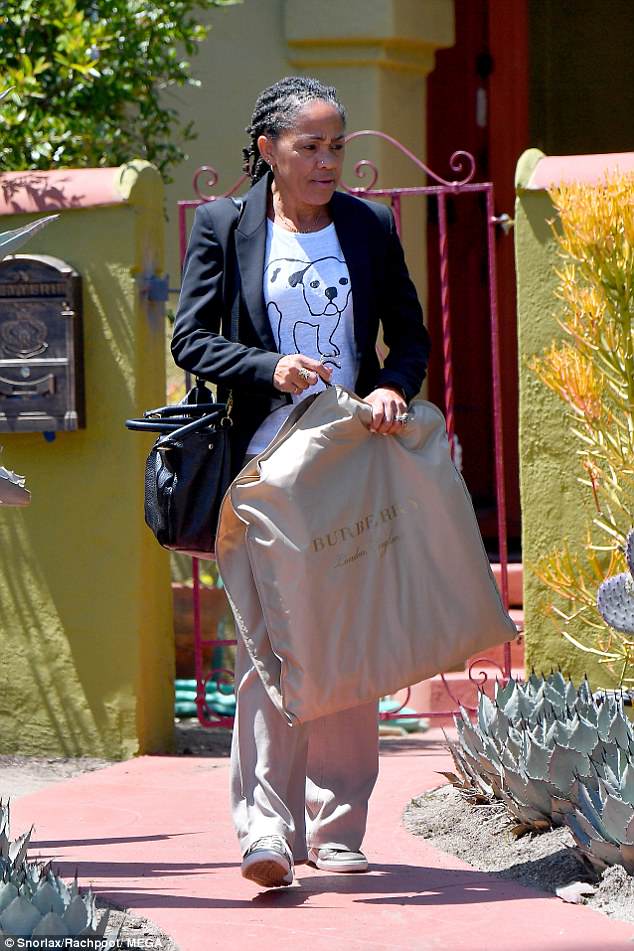 Meghan Markle’s mother, Doria Ragland, made her way to Los Angeles International Airport on Tuesday ahead of the royal wedding

On the go: The 61-year-old yoga instructor and social worker got picked up at her California home as she made her way to LAX 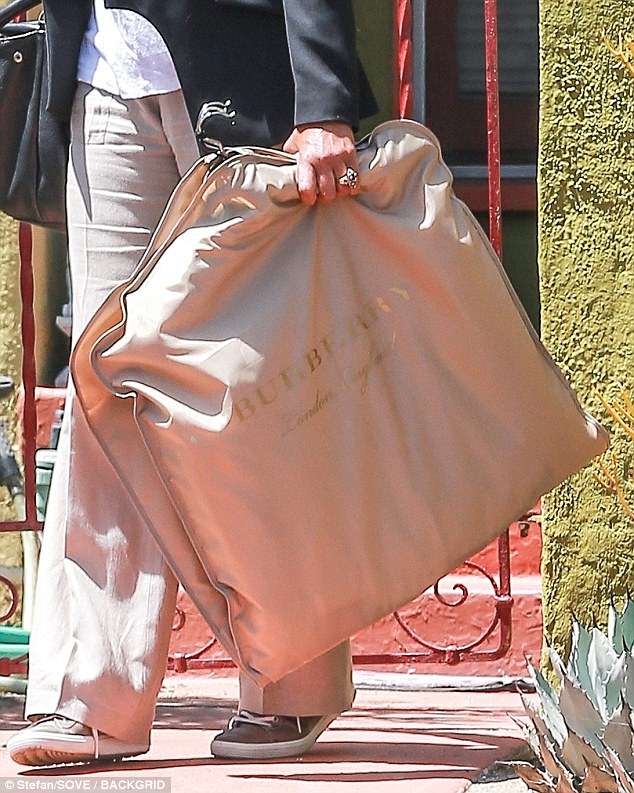 Not only is it fitting that Doria is wearing a British designer, she is also a known fan of the luxury label. She wore a peach Burberry top in October while attending the closing ceremony of the Invictus Games with Meghan and her soon-to-be husband Prince Harry.

For her international flight, Dora donned a chic blazer that she wore over a white T-shirt with a picture of a dog on the front.

She topped off the look with a pair of loose-fitting khaki pants, sneakers, and a black handbag slung over her shoulder.

Doria had her dreadlocks pulled back in a ponytail, which showed off her delicate gold earrings.

Meghan and Prince Harry are slated to say ‘I do’ on Saturday, May 19 at St. George’s Chapel, which is on the grounds at Windsor Castle.

Doria made her way to LAX on Tuesday amid speculation about who is going to walk Meghan down the aisle now that her father, Thomas Markle, has once again pulled out of the wedding.

The 73-year-old dad told TMZ that he is undergoing major heart surgery on Wednesday morning, explaining that doctors will ‘go in and clear blockage, repair damage, and put a stent where it is needed’ during the operation. 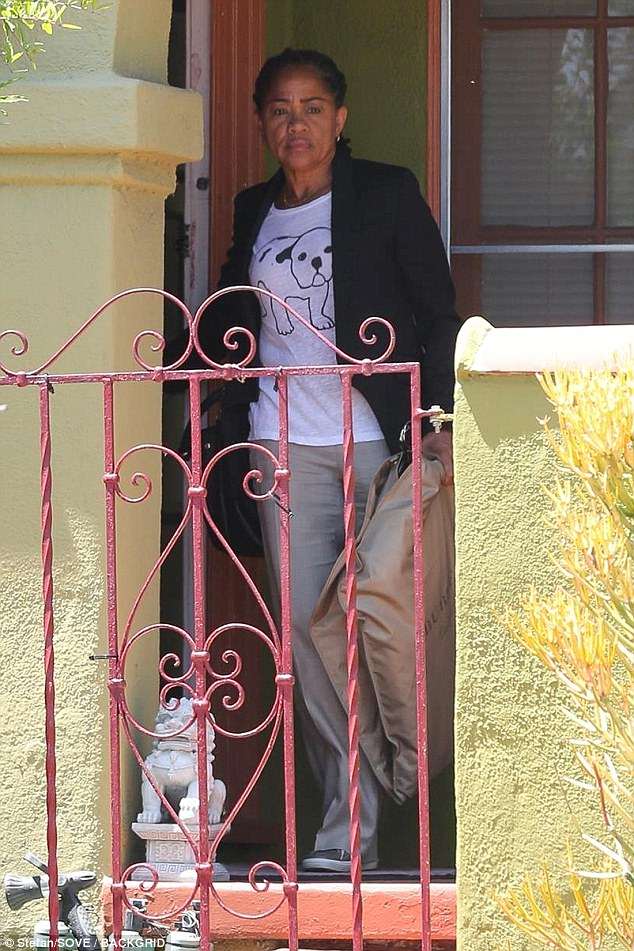 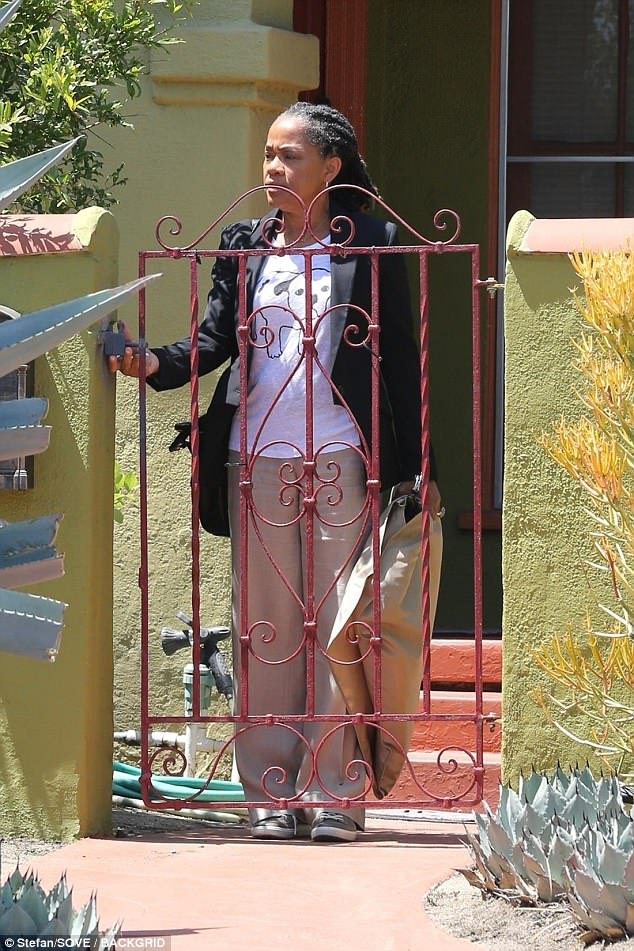 She donned a blazer, loose-fitting khaki pants, and sneakers for her international flight 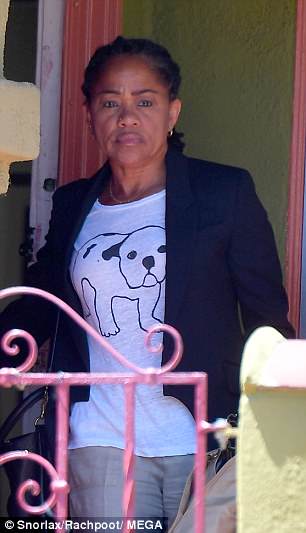 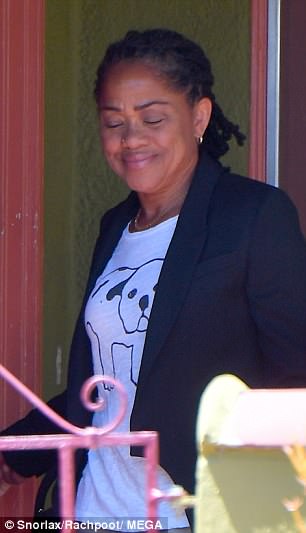 He also revealed he believes his heart attack was triggered by an open letter his son, Thomas Jr., wrote trying to convince Prince Harry not to marry Meghan.

The surgery seems to be the final end to a roller coaster of speculation surrounding Thomas’ attendance at the royal wedding. The news came just hours after it seemed Meghan had convinced her father to change his mind and walk her down the aisle.

Thomas first pulled out of the royal wedding on Monday, saying he didn’t want to embarrass his daughter any further after the Mail on Sunday revealed he had staged paparazzi photos for money.

But on Tuesday it seemed he had backtracked on his decision after the bride-to-be pleaded with him to come to England.

He told TMZ that Meghan tried calling him on Monday, but he wasn’t near his phone. She later sent a text saying she loved him and was concerned about his health.

‘I hate the idea of missing one of the greatest moments in history and walking my daughter down the aisle,’ Thomas said on Tuesday.

‘Of course I’d walk her down the aisle. This is a historic moment. I’d like to be a part of history.’ 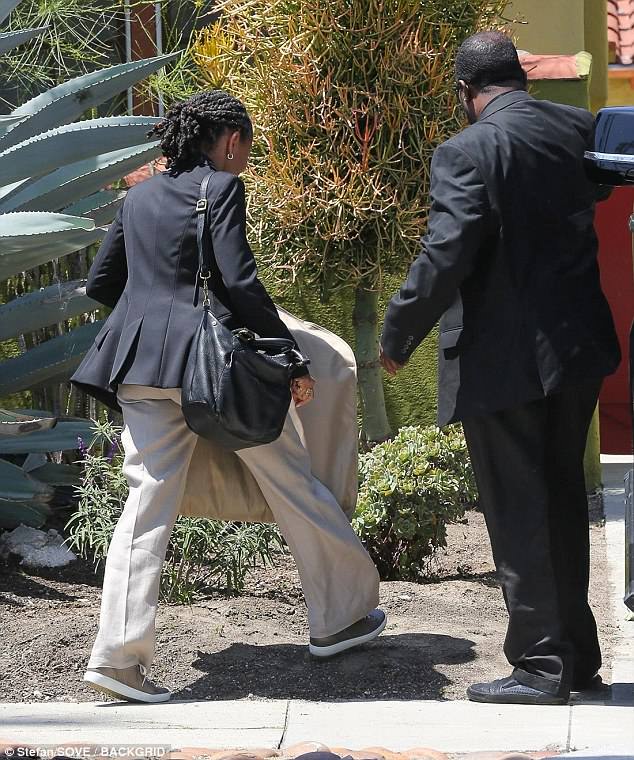 The mother-of-one carried a black handbag, which she wore slung over her shoulder 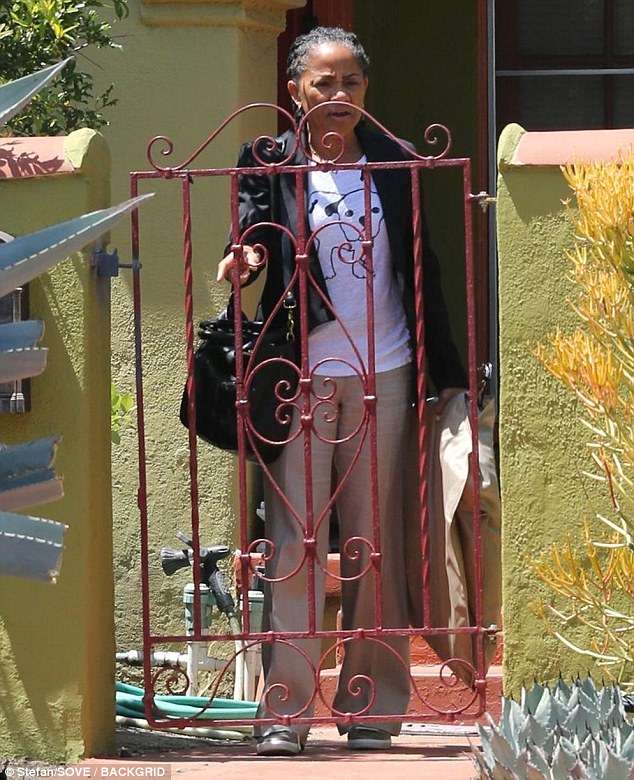 Earlier this week, it was reported that Doria had quit her job at a Los Angeles mental health care facility ahead of the royal wedding 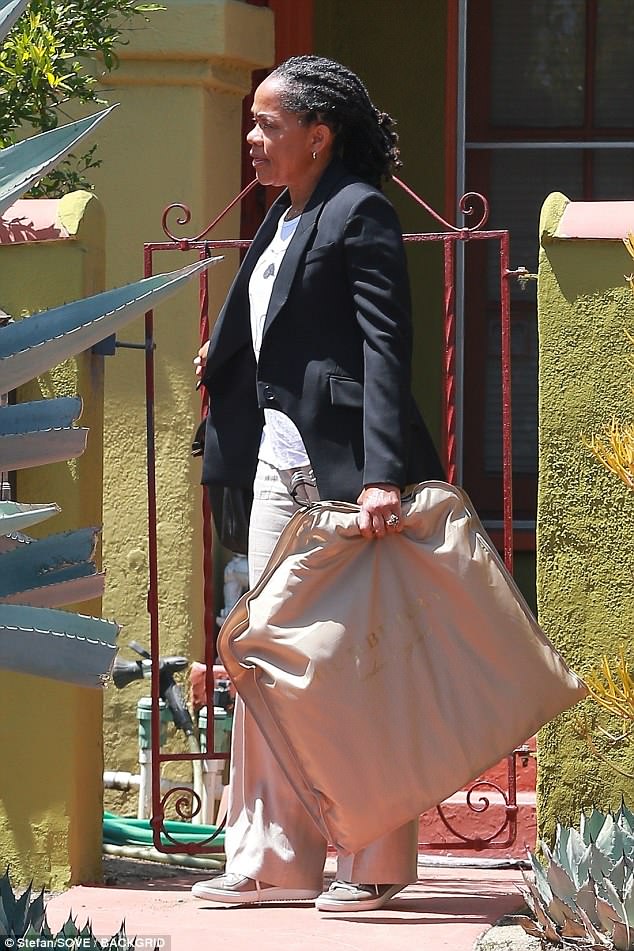 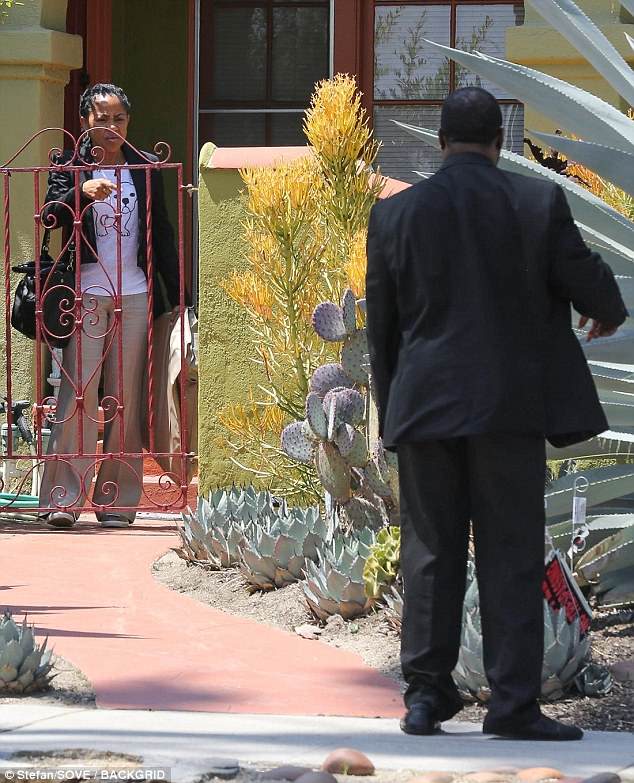 Speculation is mounting that Doria will be the one to walk Meghan down the aisle at St. George’s Chapel on Saturday 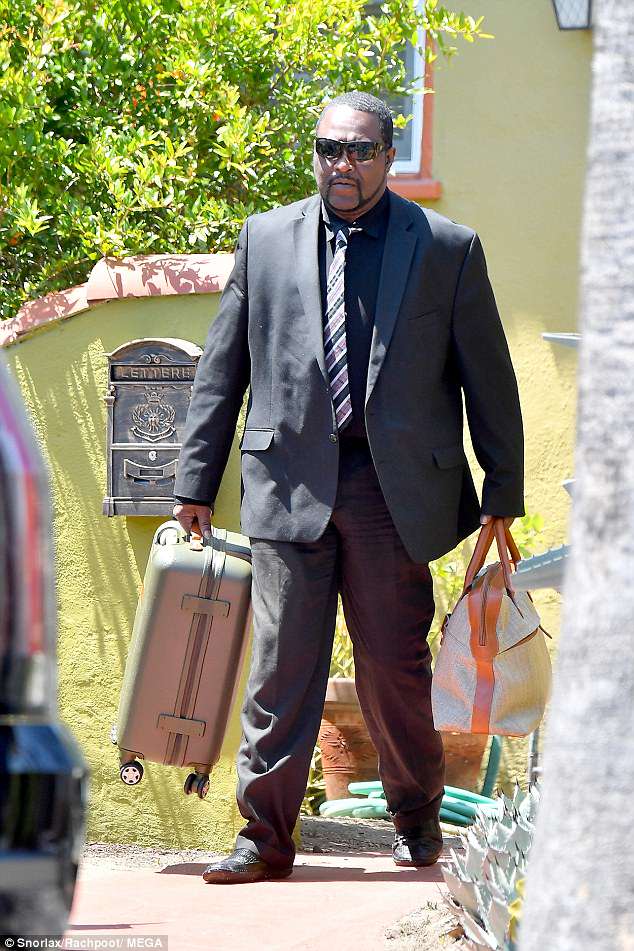 Thomas, who had a heart attack a week ago, returned to the hospital on Tuesday after having chest pains.

He said a battery of tests found that the heart attack had done ‘significant damage’ and revealed he needed immediate surgery.

Thomas put the blame for his recent health troubles on his son Thomas Jr., who told Prince Harry that marrying Meghan would be the ‘biggest mistake in royal wedding history.’

However, the dad revealed that Meghan held no hard feelings against him for setting up paparazzi photos for money.

When asked what the Queen thought about his money grab, Thomas laughed and said: ‘I don’t think the Queen is thinking about what I’m doing.’

Before changing his mind, Thomas said he believed his ex-wife Doria would be a ‘good choice’ to give their daughter away.

Doria is the clear favorite to walk her down the aisle if Thomas is not cleared by doctors to fly.

Prince Charles is 2/1 with the bookies to step in while Prince William is 5/1 to take Meghan into St George’s before starting his duties as Harry’s best man. 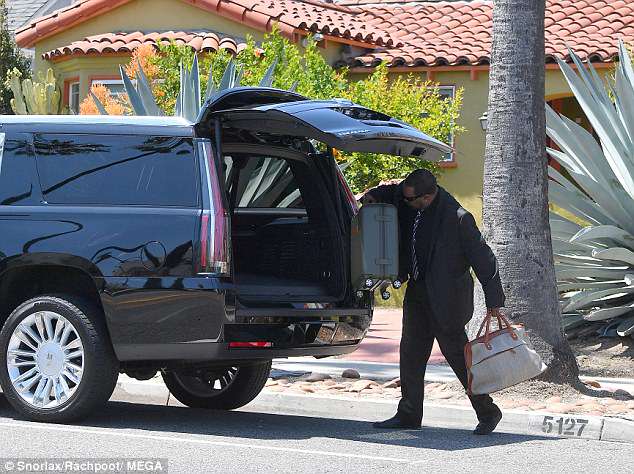 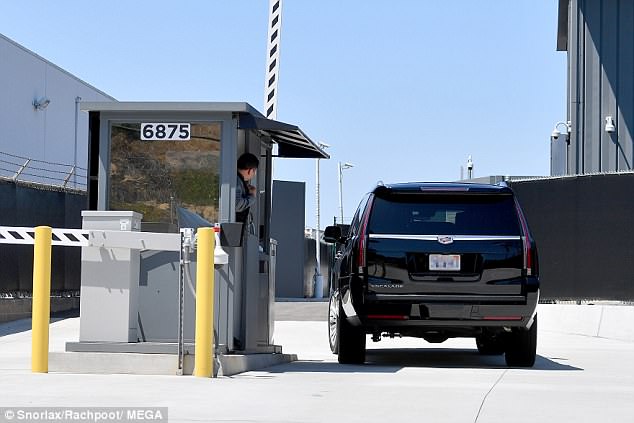 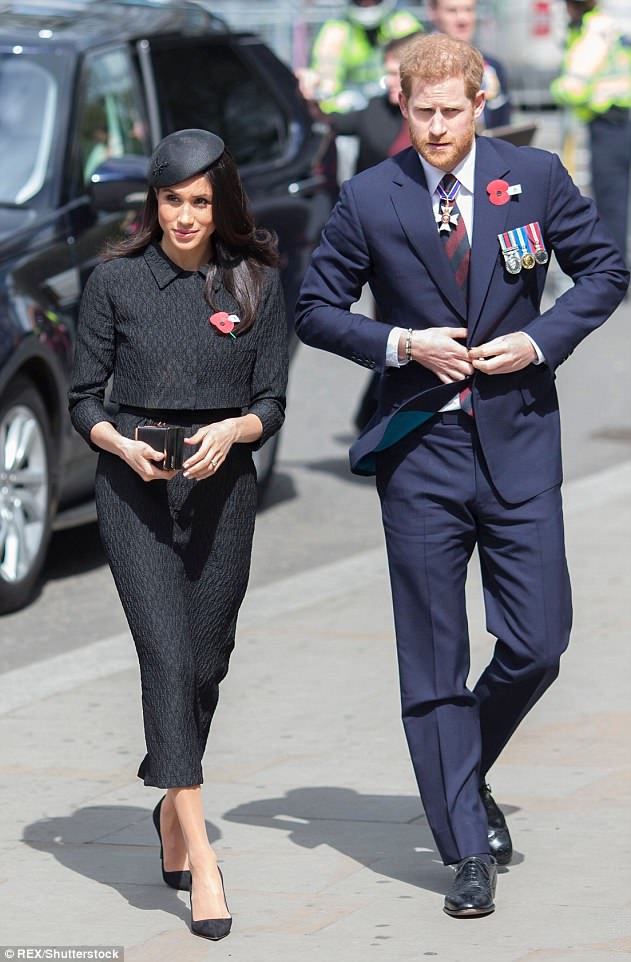 Wedding day: Meghan and Prince Harry are slated to say ‘I do’ on Saturday, May 19 at St. George’s Chapel, which is on the grounds at Windsor Castle

There have also been a flurry of bets on Meghan walking down the aisle alone.

Doria made her way to LAX just one day after it was reported that she quit her job at a mental health clinic.

According to Us Weekly, the 61-year-old social worker she left her role at the Los Angeles clinic she had been working at to pursue her goal of starting her own private practice following her daughter’s nuptials.

‘Doria is no longer working at the mental health clinic in the Los Angeles area. It was Doria’s decision to leave,’ a source told the outlet. ‘She has talked about starting her own private practice, focusing on working with elderly patients.’

The reports about Doria’s decision to quit her job come just one week after it was revealed that she had met with TV legend Oprah Winfrey at her $88 million Los Angeles home in order to discuss ideas for a tell-all interview.

According to the Mirror Online, the duo spent six hours together going over potential topics that could be covered during a sit-down, with a source saying that they focused particularly on race and the role that it has played in Harry and Meghan’s relationship.

‘Oprah and Doria spent a long time chatting and they got on really well,’ the source said. 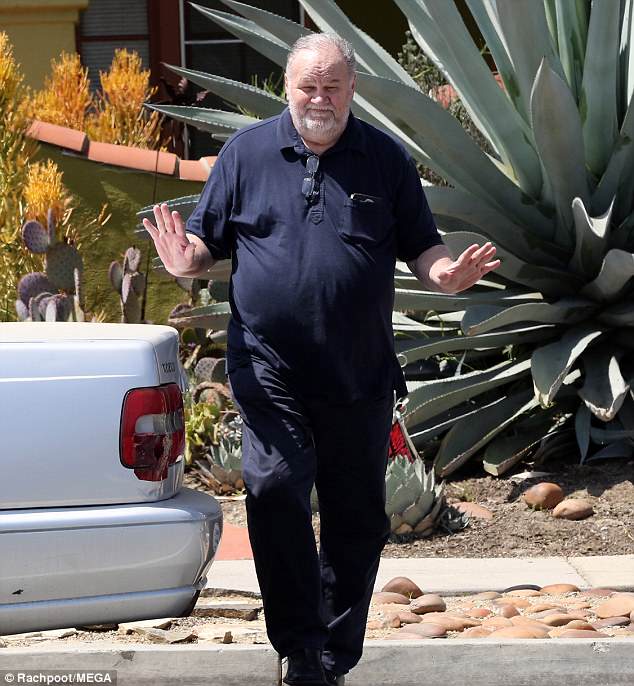 Meghan’s father, Thomas Markle, has once again pulled out of his daughter’s big day, revealing that he needs to have major heart surgery on Wednesday morning 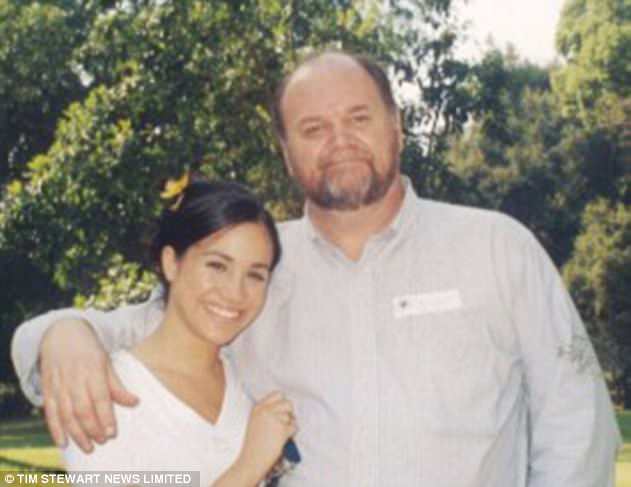 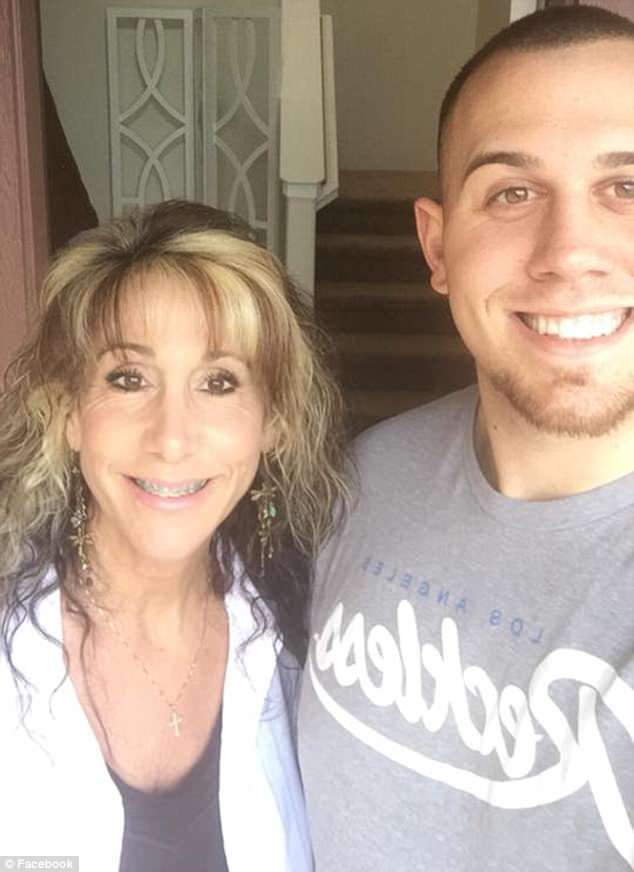 Extended family: Meghan’s nephews Tyler (R) and Thomas Dooley and their mother, Tracy Dooley (L), are in London for the wedding but they aren’t thought to be attending the ceremony 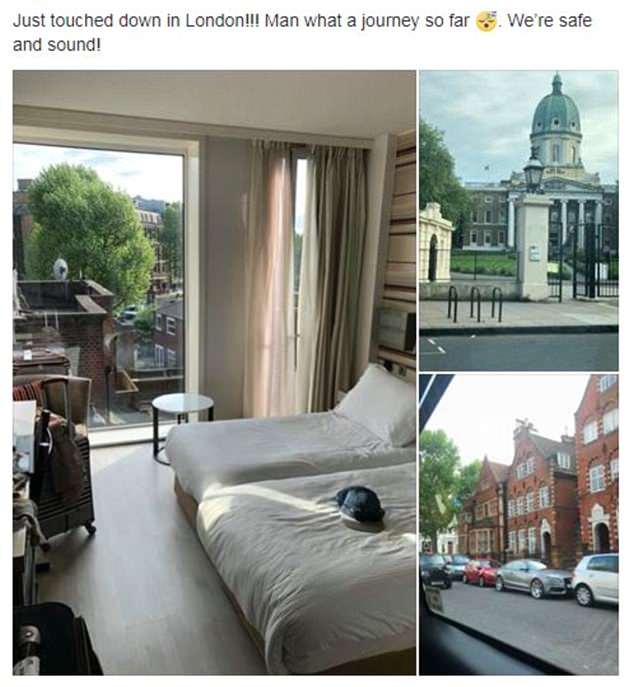 ‘What a journey so far!’ Shortly after arriving in London, Tyler began sharing images of the trip on his Facebook page

‘The most important and significant issue they spoke about was race and how badly some people had reacted to Meghan and Harry.

‘What happened to Meghan and Harry was disgusting and they and all of their families were horrified. It’s an issue close to both Doria and Oprah, who have both suffered racism.’

However, the interview reportedly needs to be approved by Meghan, Harry, and Buckingham Palace before it is recorded.

Growing up, Meghan lived with her mother in a two-bedroom, two-bathroom apartment in the Mid-Wilshire area of Los Angeles.

The Suits star’s mother, Doria, and her father, Thomas, divorced when she was six years old.

Although Doria is thought to be the only close relative attending the royal wedding, members of Meghan’s extended family are in town for Saturday’s celebration.

Despite previously revealing they hadn’t received an invite to the royal wedding, the trio were seen making their way to the arrivals gate at the London airport on Monday with 13 suitcases.

The family have been enlisted as ‘special correspondents’ for Good Morning Britain and are expected to report from Windsor, though are thought not to be attending the ceremony.