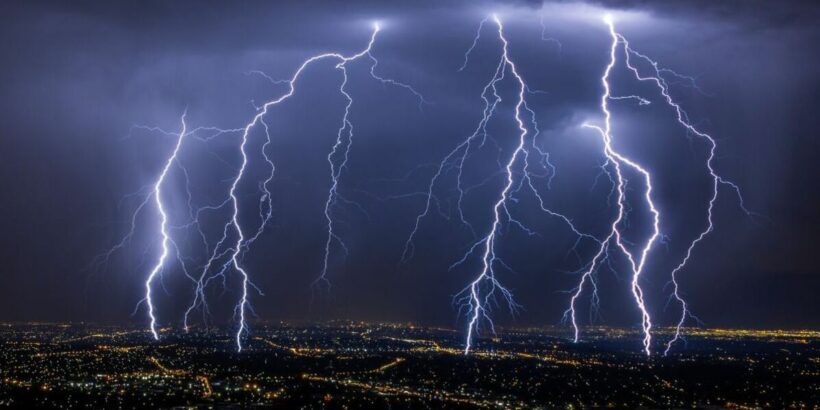 The weather forecast has caused havoc at Melbourne Airport with a number of flight disruptions and delays.

Australian journalist Anthony Lucas tweeted: “Wild storms in Melbourne are causing flight disruptions at the @Melair with all inbound arrivals forced into a holding pattern, while departing aircraft has been put on hold, according to @flightradar24. Expect delays.”

A picture from Flightradar24 at the time of Mr Lucas’ tweet showed seven flights already backed up waiting for departure.

The weather warning from the Bureau of Meteorology warns of heavy rainfall, damaging winds and large hailstones.

The alert applies to those in Central, North Central and parts of South West, West and South Gippsland, Northern Country, North East and Wimmera Forecast Districts.

Forecasts show that the weather conditions are being caused by an area of low pressure joining a damp and unpredictable front which is producing thunderstorms and rain across Victoria.

The warning states: “Severe thunderstorms are likely to produce heavy rainfall that may lead to flash flooding, damaging winds and large hailstones in the warning area over the next several hours.

“Locations which may be affected include Maryborough, Ballarat, Melbourne, Traralgon, Sale and Moe.”

Residents in the impacted areas have been advised to be cautious when driving in conditions which are dangerous.

State Emergency Services have issued advice warning drives to safely pull away from trees, drains, flood water and other road dangers and to avoid travel if possible.

Other advice states that loose garden furniture such as umbrellas and trampolines should be checked to ensure it is secure and vehicles should be moved away from trees due to the increased risk of them falling.

The State Emergency Service said: “If outdoors, move to a safe place indoors. Stay away from trees, drains, gutters, creeks, and waterways. Stay away from fallen powerlines – always assume they are live.”

Advice also warns of the increased risk of landslides and debris on roads following heavy rainfall.

Residents should regularly check for weather announcements and updates in the region.