Slowly, tentatively, Melbourne is waking from its long COVID slumber.

Masks are off in the office and work-from-home advice has been lifted. Foot traffic at train stations and coffee shops has stepped up markedly. But on Monday, the first day back, progress was slow, with the number of pedestrians only one-third of pre-COVID levels. The noise and bustle of the city was no more than a gentle hum.

This is what it looked like across the day.

Two years ago, before coronavirus flattened the CBD, a flood of passengers spilled out of Southern Cross station each morning, filtering into the streets and laneways. On Monday morning, a smaller but steady trickle made the trip.

But it had its compensations. A seat all the way in on the train, a rare luxury for many in pre-COVID times, was available for most commuters after many office workers still opted to keep working from home.

Pharmaceutical sales worker Naoko Okimura was back for only her second day since last year. Her train was “starting to get a bit busier”, she said, and she expected over coming days to be joined by an increasing number of commuters. She is preparing to return to the office four days a week. 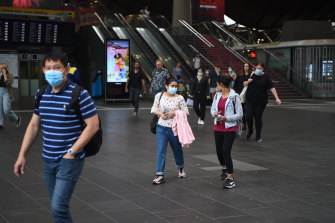 Metro Trains employee Gagandeep Singh has a longer view. Watching over the comings and goings, he said while some trains were reasonably full on Monday, others were only at 5 per cent occupancy. “There used to be a queue of people waiting to go up there each morning,” he said, gesturing to the station’s escalators. “This is not a normal Monday. The work culture has changed.”

Across the road from the Melbourne Town Hall, the 1932 Cafe in the historic Manchester Unity building is a regular coffee spot for Melbourne lord mayor Sally Capp. Sipping her tea on the day she dubbed “Mask free Monday”, Cr Capp was optimistic that, after the Omicron wave, people were slowly regaining their confidence. 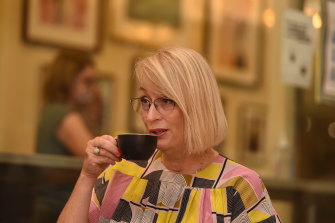 Lord mayor Sally Capp has a morning cuppa at 1932 Cafe in the city. Credit:Justin McManus

“We all went through a summer of having Omicron around us dealing with it in our own way,” she said. “We’ve shown that we can live with it. And so we really are moving into COVID confidence and competence.”

But the return to a bustling daytime economy would take time. Every workplace was taking a different approach to getting staff to return and it would take a while for workers to adjust their routines and determine how they could best work flexibly, she said.

“It’s going be a really interesting transition time as we move to that new rhythm.”

Project director Brian Herlihy said construction workers had continually fronted up to work “at the coalface” during the past two years of the pandemic while many office workers never left their homes.

“They’ve had to contend with changing regulations through time like obviously the mask wearing, social-distancing rules and rules around how many people could go on the lifts on site,” he said.

Mr Herlihy said that as the Melbourne Quarter development drew closer to completion in 2024, worker numbers would rise to about 700 on site each day on what would be the biggest new office development in the city in many years. And all those offices, he believes, will eventually be filled.

“We are very confident in the resurgence of the city and that workers are coming back, and will come back,” he said.

“Precincts like Melbourne Quarter, the location and amenities we have, are going to be really attractive to businesses and to workers.” 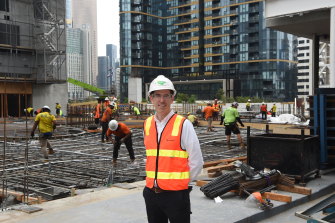 But even if the man who builds office buildings is right about the future of offices in the CBD, there is a long way to go. In January, office occupancy in Melbourne’s CBD had plunged to a record low of 4 per cent, according to Property Council of Australia figures.

Consultancy firm EY used the pandemic time to revamp its Melbourne offices to entice employees to return but on Monday only about 10 per cent of staff turned up to experience the breakout spaces, free coffee and lunch delivered to their desks.

“Flexibility is not new for us. I think what we’re hearing from our people is that they still want to come back two to three days a week,” she said.

“Certainly Monday – I’m not surprised we are probably not as full.”

Ms Colak said she had started coming into the office a few days each week, but was still in a minority. “I haven’t felt the real buzz coming back today, which I thought I might,” she admitted.

“We do get a sense that we [EY] need to earn the commute, we are conscious of that. At the same time we don’t want to do petty things that don’t necessarily connect with our people.” 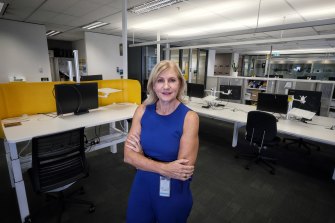 Ms Colak said she expected it would be busier in the office later in the week, and over a few months it may gradually build to around 60 per cent.

“I think it’s going to be a slow climb, but it will be a climb,” she said. “It’s almost that tipping point. At what point do I feel like there’s enough people in to make it worth my while to come in?” 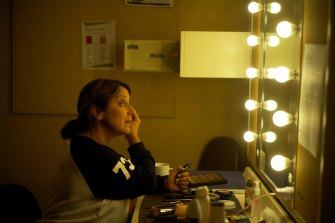 Deep in the backstage labyrinth of the Arts Centre, actor Silvie Paladino applied make-up before her appearance in the Melbourne Theatre Company’s production of Fun Home.

The coronavirus pandemic had been terrible for theatre. The industry had been “absolutely decimated”. Now, thankfully, things were picking up. Monday night’s performance was sold out.

“It’s absolutely thrilling and exciting [to be back on stage] and you don’t realise how much you miss it when you’re not doing it,” she said.

“It’s been awesome to see. The audience gets so excited by being back in the theatre.”

As people started coming back into the city in the evening, the night-time economy was reviving and there was a real buzz on the streets. 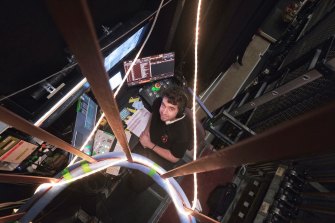 “As wonderful as Netflix and all that is, there is nothing like live theatre, live music to get your heart racing,” Paladino said. “You know you feel alive again.”

Under the pedestrian bridge on the Yarra, Ponyfish Island bar was starting to fill up. People were ordering cocktails and beers, relaxing in the afternoon sunlight. Bar tender Max Orritt said that, as an outdoor bar, Ponyfish Island’s popularity had been more dependent on the weather than the latest health advice from the government. 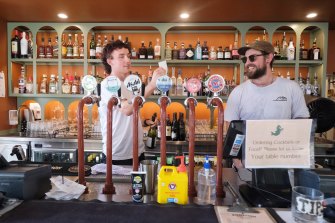 “If it’s a decent day that’s when it picks up, if it’s decent weather and the sun’s out,” he said.

You would not necessarily expect a big crowd on a Monday afternoon – even a warm one – but perched in one corner, Ireland Hall, Zenya Surgeoner and Aben Drake were catching up over cocktails. Ms Hall had moved from Melbourne to Bendigo last year but was back for a visit.

“It’s nice to be able to come back and not have to think about all the COVID stuff,” she said.

“We only moved to Bendigo last year to escape it all. It’s like coming back home properly and not in that COVID fear that we had last year.

“Melbourne is still here, it hasn’t fallen down.” 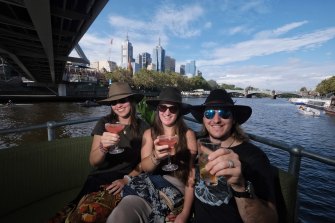