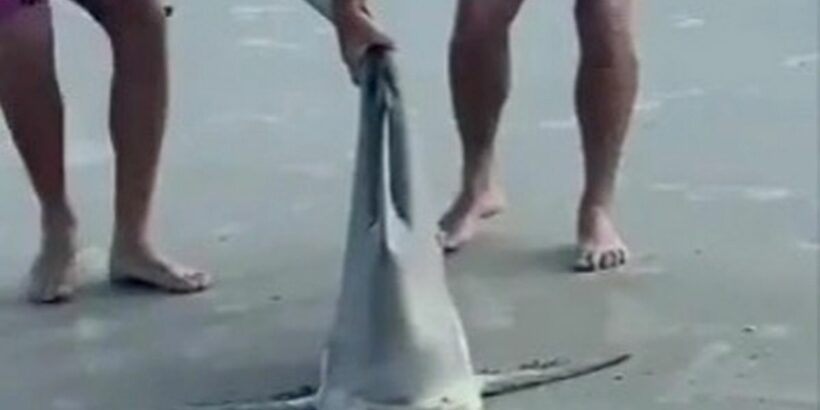 Two men have been labelled "monsters" after they were spotted dragging a shark onto a beach and stabbing it in the head.

Disturbing footage online shows the moment the pals were confronted by a shocked beachgoer who begged them to stop the horrific act in Florida.

But the pair refused, with one of them responding that he will feed his family with their despicable catch.

The men were filmed tugging the black-tip shark as it desperately thrashed around on the sand, reports The Sun.

The horrific act was captured in New Smyrna by journalist Louis Aguirre and has since been viewed over 130,000 times.

In the clip, a woman could be heard urging the pair to stop.

But they continued unfazed, which prompted the alarmed witness to say: "Please do not do anything to it."

One man brutally knifed the shark and told the woman it is "natural."

The woman proceeded to question him and said: "Are you enjoying this?"

In which he responds: "Nah, I'm taking it to eat and feed my family."

The shocking footage ended with the man trying to slice the shark's head open.

Aguirre commented: "A healthy ocean needs a healthy shark population. If the sharks die, the oceans die. Plain and simple.

"We need more shark awareness and education, and better laws to protect our sharks."

Another wrote: "Cowards. They wouldn't try that if it was in the water."

While a third posted: "This is absolutely disgusting and difficult to watch. Monsters."

Another user added: "Can't watch this! This is so disgusting!!! Needs to go on the news and someone needs to identify these people!"