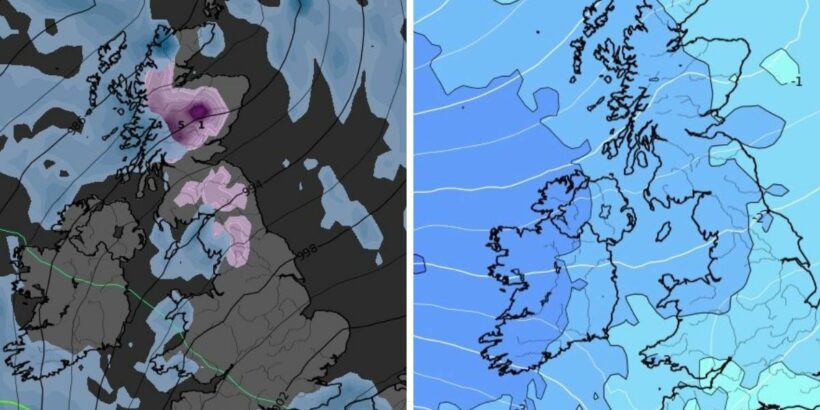 The Met Office has officially confirmed snow may be set to fall across parts of Britain from next week, as a brief interlude from the wet and windy weather sees temperatures plummet. The forecaster, which is usually tight-lipped when it comes to snow predictions, made the revelation as part of its long-range weather forecast published today, November 15. It alludes to colder temperatures creeping in from this weekend, with the chances of some light snow falling towards the end of the month. Its outlook from November 20 to November 29 gives a rundown of what to expect.

In full it says: “On Sunday, rain will continue to move erratically eastwards, followed by cooler and brighter conditions. Into the following week, more organised heavy rain and strong winds are then possible across west and southwest parts of the UK, this making uncertain northeastwards progress, and perhaps bringing some, at least transient, snow to upland areas of northern Britain.

“For the rest of the period, unsettled weather is expected to dominate, hence showers and rain with the risk of gales across most parts of the UK, particularly western and northwestern areas. Temperatures are expected to be generally near normal, except in some eastern regions, where cold air from the continent could cause them to dip slightly below average at times.”

The country will have to endure torrential downpours and gales beforehand, though, with a 13 hour yellow weather warning in place tomorrow into Thursday for the southern English coast. Jim Dale, senior meteorologist at British Weather Services, told Express.co.uk that these unsettled conditions will continue to fare until at least November 27.

He said: “There will be several fronts and troughs up to November 26 and November 27 – some of which will have heavy rain and strong winds attached, so for now we are in a volatile stretch with the jet stream funnelling the unsettled activity towered us at intervals.” This, he said, is coming up from the Atlantic.

With this in mind, he said the “expectation is high” for further weather warnings to come, but did not specify whether these would include any wintry showers. As the country heads into December things are set to change and become far more settled, opening the door to more snowy conditions.

Mr Dale added: “We are more or less around the seasonal averages now, with a further small slide likely. Early December looks dry and more settled but that will mean fog and some light frosts, if it plays out.”

The Met Office’s long-range forecast which runs from the end of November until December 14 gives a hint of more snow to come – but does give this prediction with some caution. This is due to the fact that forecasts are always subject to change before they play out in the weeks that follow.

Its full forecast for the start of December says some central and northern parts of the country could be set for a dusting. “There is a degree of uncertainty in the forecast for this period,” it adds.

“The more likely outcome is that conditions will become generally settled as high pressure moves towards or develops near the UK, bringing drier and calmer weather than of late. Temperatures are likely to trend from near average towards below average at times, with an increased risk of frost and fog.

“There is however a chance that low-pressure systems will run to the south of the UK, at least for a time, whilst northern areas remain drier, allowing colder air to become more established further north. This scenario would increase the chance of snow across central areas, with perhaps wintry showers in parts of the north.”

WX Charts, an interactive weather model, shows the outlook for next week – with up to 5cm in the Scottish Highlands and around 3cm falling in northern England during the afternoon of Monday, November 21. Areas in the vicinity of Liverpool and Newcastle look set to be affected.

On Tuesday, it will be mostly the Scottish Highlands affected with up to 5cm again, with maybe 1cm falling in the north. If the maps are correct, this looks to melt away during the day as temperatures naturally increase.

DON’T MISS:
Fears UK to cave to EU in Brexit talks as key red line in doubt [ANALYSIS]
‘Hundreds’ of MPs download I’m a Celeb app to make Hancock do trials [REVEAL]
Gavin Williamson could be stripped of knighthood [INSIGHT]

As the week continues, the snow risk falls away entirely – with the usual highlands getting a fine dusting with some overnight frost. Precipitation maps show other parts of the country where snow showers are not predicted will get rain instead.

From the south west to the south east, for example, a large band of rain dominates on Sunday evening, moving north-west by Monday. Then, from Tuesday onwards more spontaneous showers begin to hit most regions of the UK.