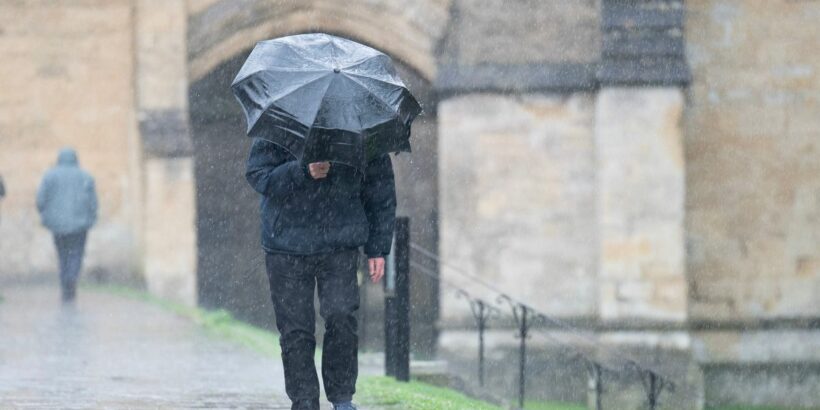 The Met Office has issued yellow weather warnings due to gusty winds of up to 70mph as well heavy downpours of rain affecting the country.

The Met Office said: "A band of rain and gusty winds will move east. For most this will simply be a period of normal, unpleasant autumn conditions.

"However, for some a short period of very heavy rain and very strong winds is possible bringing gusts of 50-60 mph temporarily and perhaps 70 mph on some exposed coasts as well as 20 mm of rain within an hour.

"There is also a chance of hail and lightning in a few places as an additional hazard."

The forecast has warned the possibility of power cuts, and public transport delays including ferries.

The Met Office added: "Heavy rain through this afternoon and evening, falling on to already saturated ground, is expected to cause some localised flooding.

"Accumulations widely 15-25mm expected across the warning area with 50mm possible for a few sites over higher ground."

It adds that potential flooding could cause hazardous driving conditions as well as home and businesses being at risk, according to the forecaster.

Across England, there are 31 flood alerts in place, two in Scotland and four alerts in Wales.

The forecaster says the public can look forward to heavy rain until Wednesday with it easing as time goes on, with sunny spells in between.

The Met Office's long range outlook continues: "Friday is expected to be cloudy for many with rain and drizzle, some heavier and more persistent in the west and northwest with a chance of severe gales. Remaining mostly dry, windy and mild elsewhere.

"A northwest-southeast split is likely to develop over the weekend, bringing unsettled conditions to the northwest and more settled weather in southern parts.

"Spells of rain, showers and stronger winds are most likely to affect the northwest, with a continuing risk of gales."