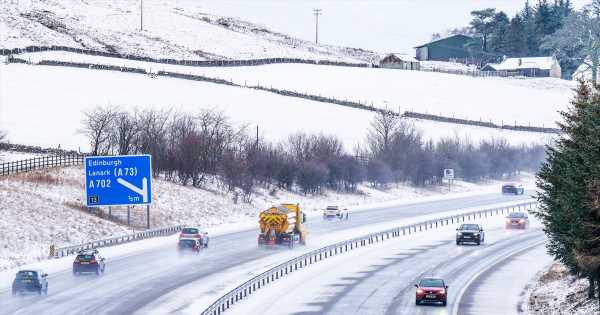 The middle of January for Britain could potentially be subject to the first snowfall of 2023.

While there is a a risk of snow heading for the UK, the Met Office has yet to rule out "wintry showers" occurring in the next few days.

WXCHARTS weather maps show a surge of cold air from Saturday (January 21) , as well as some slight snow.

How much snow the country will experience is not exactly known but areas including Scotland, Wales and parts of England could receive a dusting of snowfall on Sunday (January 22).

Met Office spokesman Nicola Maxey said: "The temperatures are staying mild for much of the country this week, they do trend downwards as we head into next week.

"However, although temperatures will perhaps be colder than of late we are not expecting anything unusual, perhaps nearer average for the time of year, although some colder interludes are likely, bringing wintry conditions at times."

Ian Simpson, a meteorologist from Netweather, spoke on the current weather patterns.

In his blog, he said: "The current outlook is for more of the same as what we've been having during the past fortnight, with generally mild and wet weather and low pressure systems regularly moving in from the North Atlantic.

"It will often be milder than of late in Scotland, with some warmer tropical maritime air masses often pushing well into northern parts of Britain."

The Met Office's long range forecast from January 14 to January 23 reads: "On Saturday, showers or rain, locally heavy, with some bright or sunny spells at times. Drier conditions more likely in the north, whereas southern areas will perhaps see some persistent, heavy rain.

"Windy, especially across parts of the west/southwest. On Sunday, low pressure will probably be replaced by a ridge from the west, introducing a colder northerly flow.

"Conditions will be a mix of sunny spells with the occasional shower, wintry in the north."