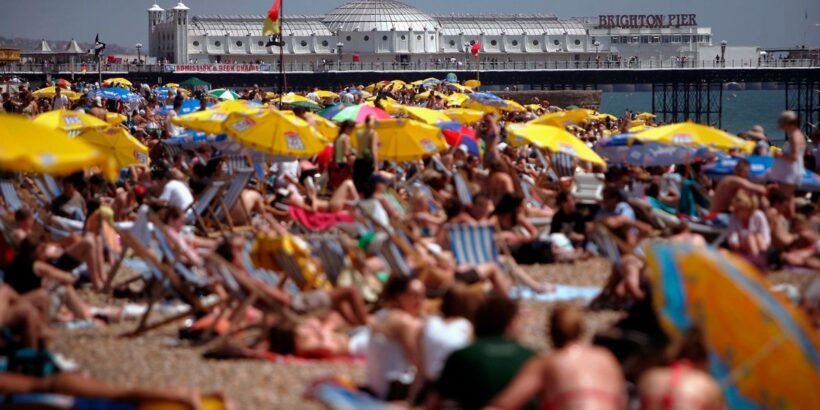 Britons will be getting into the summer mood with lashings of golden rays and blue skies on the way.

The mercury is expected to hit 70F before the end of the month, well above average for the time of year.

According to some forecasters, some regions are expecting highs of 21C through the end of March, leading to a "mini-heatwave."

This is due to a massive high-pressure system that is set to bring a blast of North African air and be swept across the country.

Tomorrow will see clouds lingering to the south and west and along the North Sea Coast.

Otherwise, it will be dry with extensive sunshine for most, with temperatures reaching around 14C for the majority and possibly 18C for some.

Scientists have suggested that Britain's "early summer" could be caused by a "completely unprecedented" heatwave in the Arctic.

BBC weather forecaster Darren Bett said: "The weather is really settling down, there is going to be a lot of dry weather, probably for the next week or so."

BBC weather forecaster Chris Fawkes added: "Our settled weather is due to this big area of high pressure.

"We do have a weather front coming in on Sunday and Monday, very weak affair, could bring an odd shower but the emphasis nevertheless remains on an extended run of dry weather with lots of sunshine in the forecast as well. It is going to be mild for the time of year."

The Met Office has issued an update on the potential of an April heatwave to scorch Brits this spring.

Weather expert Jim Dale spoke about the potential of warmer weather this season.

He said: "I think hot weather could come in fairly early as far as April is concerned perhaps.

I know March is the start of spring but I think we're probably going to get properly into April before we start to see the searing sort of temperatures."

Jim Dale predicted that a heatwave will hit in the middle of April.

April is expected to be warmer as the country gradually warms up to summer but temperatures could be above average for this time of year.