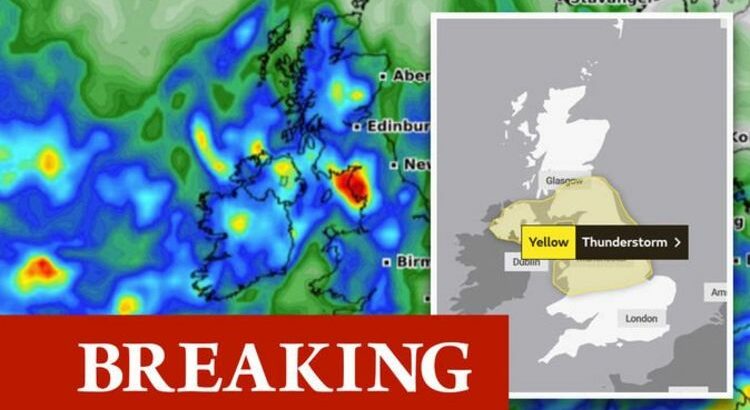 Met Office forecasters have issued another weather warning for thunderstorms, following weeks of heavy rain. With many Brits hoping for a return of heatwave conditions, the forecast for the week ahead is not looking good.

Lightning storms and slow-moving rain is forecast to wreak havoc across England, Northern Ireland, Wales and Scotland this week.

The Met Office warns: “Heavy showers are expected across much of the UK on Friday. Within the warning area these showers and thunderstorms will be slow moving and may cause localised surface water impacts.

“Rainfall totals will vary considerably and not all locations will be affected by the heaviest showers.

“However, where the showers do occur there is potential for 20-30mm of rain in a short space of time and during the course of the day there is a chance that some places could see as much as 80-100mm build up.

The warnings are in place from 10am on Friday to 11.59pm the same day for

Forecasts say a 400-mile wide Atlantic system could bring 60mph gusts to parts of the UK starting on Thursday.

If named, this would become Storm Fleur, following on from Storm Evert last week.

Met Office forecaster Marco Petagna told the Mirror: “Is the next named storm coming? There is potential for it, with a deep area of low pressure which could turn wet and windy again around Thursday.

“Forecast models show a continuation of our cool and changeable pattern for 10 to 14 days, but there are optimistic signals for warmer high pressure following.”

Campers were forced to abandon their tents as the gale-force winds struck, and two women were seriously injured when an oak tree fell near Heveningham in Suffolk.

The highest wind of the storm was 69mpg, recorded on the island of St Mary’s in the Scilly Isles.

While Tuesday and Wednesday are seeing sunshine and showers, forecasters are warning the weather will dive from Thursday.

Mr Petagna said: “Today and tomorrow, there will be a mixture of sunshine and showers for most across the UK.

“The weather will be more unsettled from Wednesday onwards.

“There’s showers or longer spells of rain for most areas as we go from Wednesday into Thursday and potentially Friday as well.”

The slow-moving rainfall on Friday could trigger more flood warnings, with a spate seen over the past week.