Get ready for a Mexican Wave goodbye: Mexico go 2-0 down to Brazil in the closing minutes of their World Cup clash

Mexico were knocked out in the last 16 for the seventh World Cup in a row as goals from Neymar and Roberto Firmino swept five-time champions Brazil into the quarter-finals.

The Mexicans, eliminated at this stage at every tournament since 1994, put up a valiant performance in Samara and made most of the early running on a balmy afternoon, but struggled to test Brazil goalkeeper Alisson as the sides went in level at the break.

And they were made to pay shortly after half time when Neymar slid in at the far post to poke Willian’s cross into Guillermo Ochoa’s goal and give Brazil the lead.

Mexico pressed for an equaliser but Roberto Firmino settled the tie with two minutes left when he tapped in Neymar’s pass to set up a match with Belgium or Japan, who meet later on Monday, in the last eight. 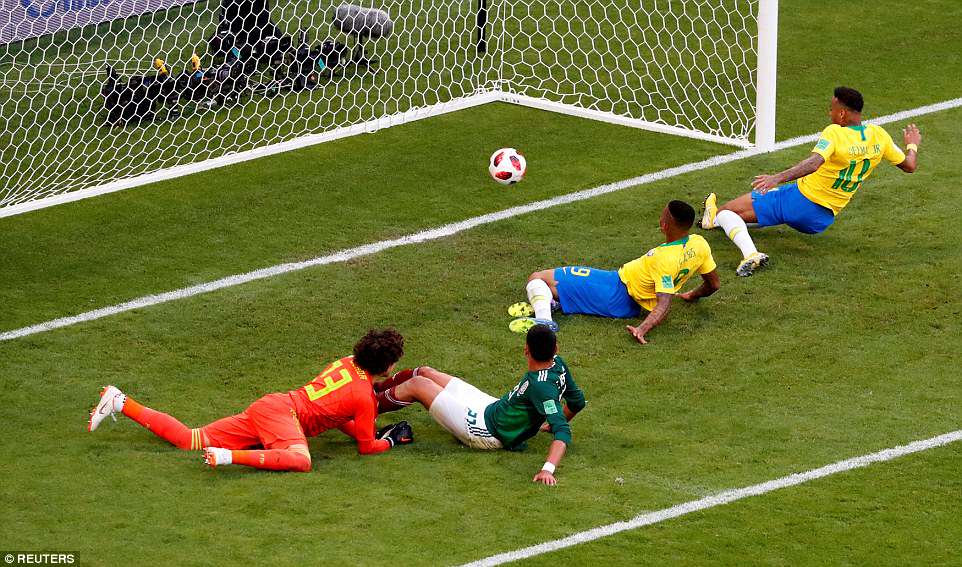 1-0: Neymar (far right) slides in to give Brazil a 1-0 lead in their World Cup round-of-16 fixture against Mexico today 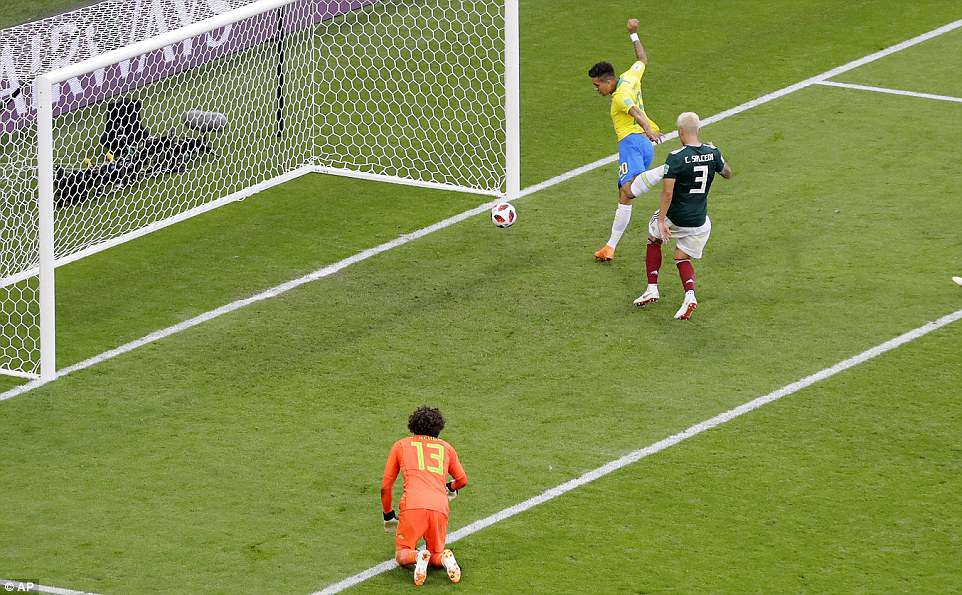 2-0: Brazilian substitute Roberto Firmino taps in to settle the match as a helpless Guillermo Ochoa watches on Brazil’s Fagner, left, vies for the ball with Mexico’s Carlos Vela, right, in the first half of the round of 16 match 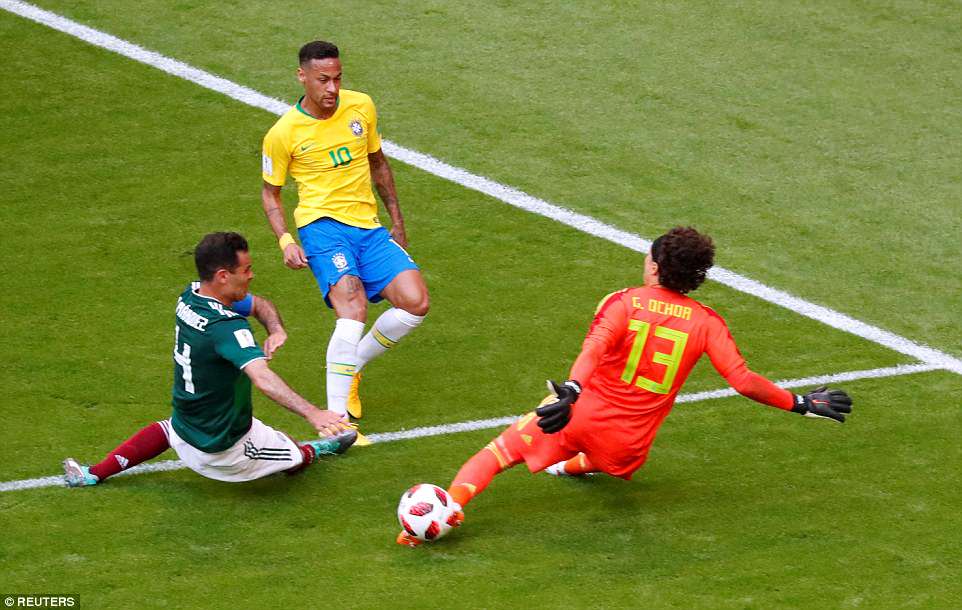 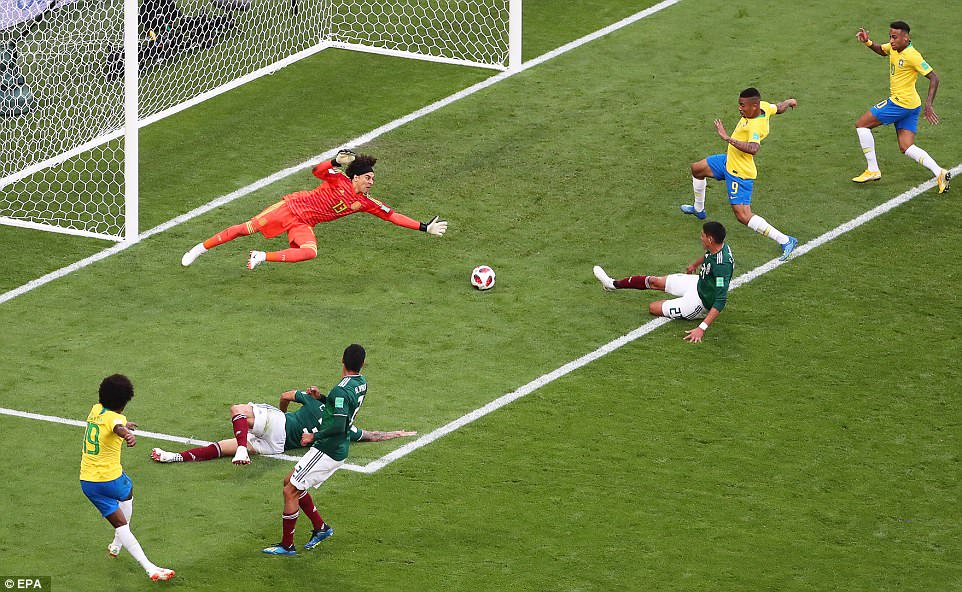 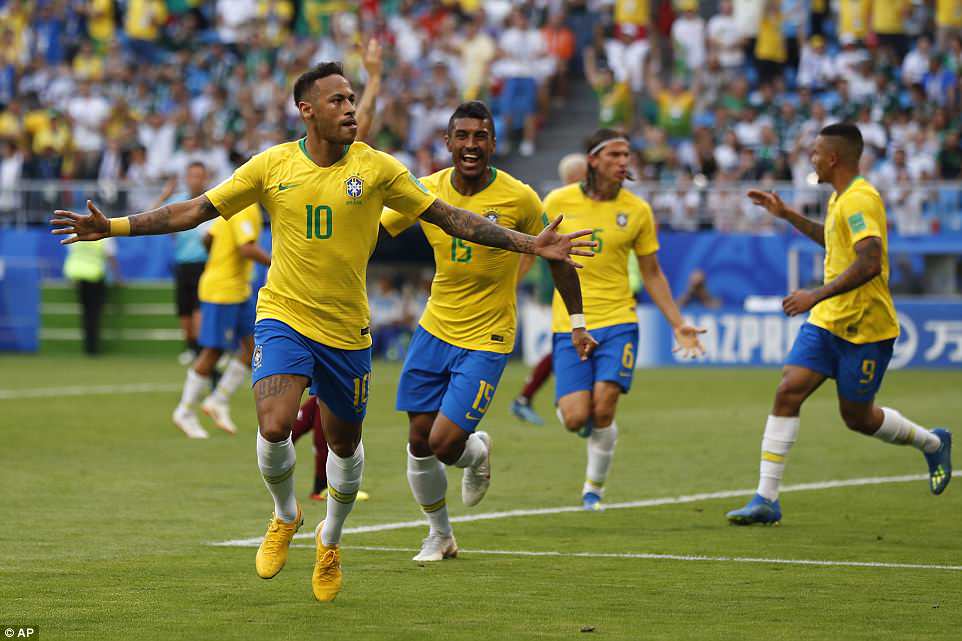 Neymar, left, celebrates after scoring his side’s opening goal against Mexico during the round of 16 match

There were no shortage of sombreros in the crowd as Mexican fans decked out the stadium with oversize straw hats and wrestling masks, while Brazilian fans were equally zealous in their fashion choices, featuring headbands in blue, yellow and green with many fans also displaying their country’s flag in face paint.

Rafa Marquez made history before kick-off in the round of 16 fixture, becoming the first outfield player to be included in the starting lineup at five World Cups, before he was substituted at half time.

Veteran defender Marquez was used off the bench earlier in the tournament in Russia but started for Mexico today after appearances in 2002, 2006, 2010 and 2014.

Five-time winners Brazil took some time to get going in the face of some hard-working Mexican pressing but went closest to opening the scoring in the first half, while Mexico too often over-elaborated.

Neymar’s right-foot shot was stopped by Mexico goalkeeper Guillermo Ochoa only moments before the Brazil playmaker rolled a pass to Philippe Coutinho, who fired over the goal in the 26th minute.

The breakthrough came in the 51st minute when Willian fired in a dangerous cross from the left after speeding past Ayala, with Neymar sliding in behind team-mate Gabriel Jesus to poke Brazil in front.

It was the PSG forward’s second goal of the 2018 tournament after his late goal against Costa Rica in the group stage, as he looks to overcome the disappointment of leaving the tournament early with injury in 2014. 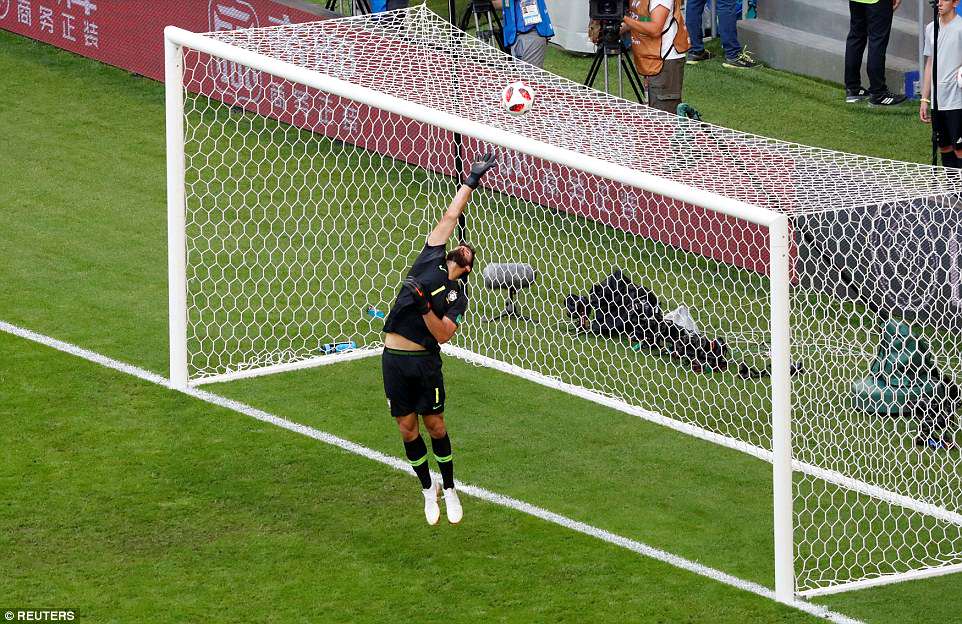 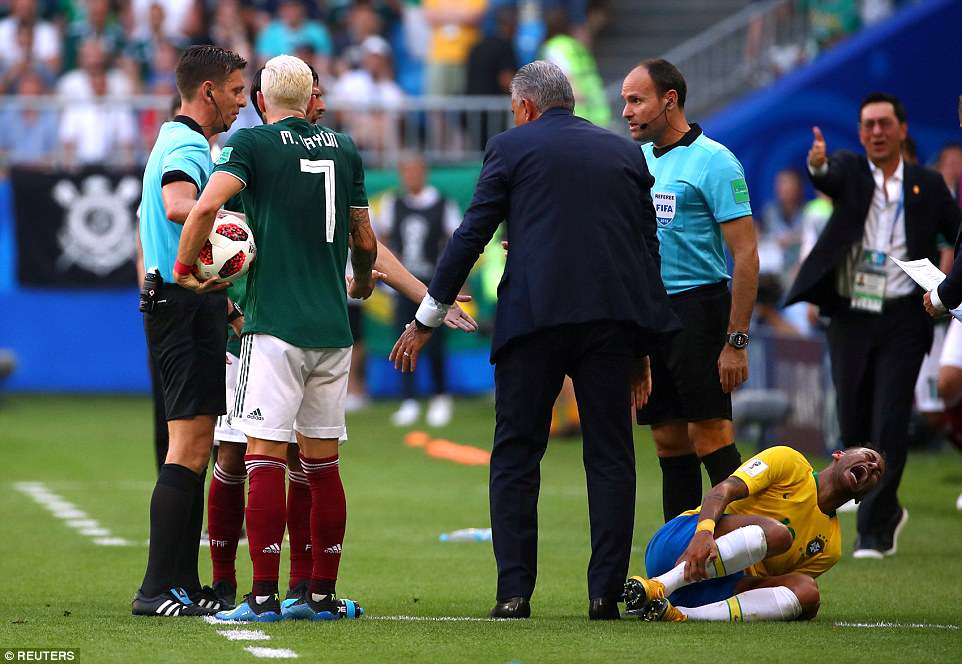 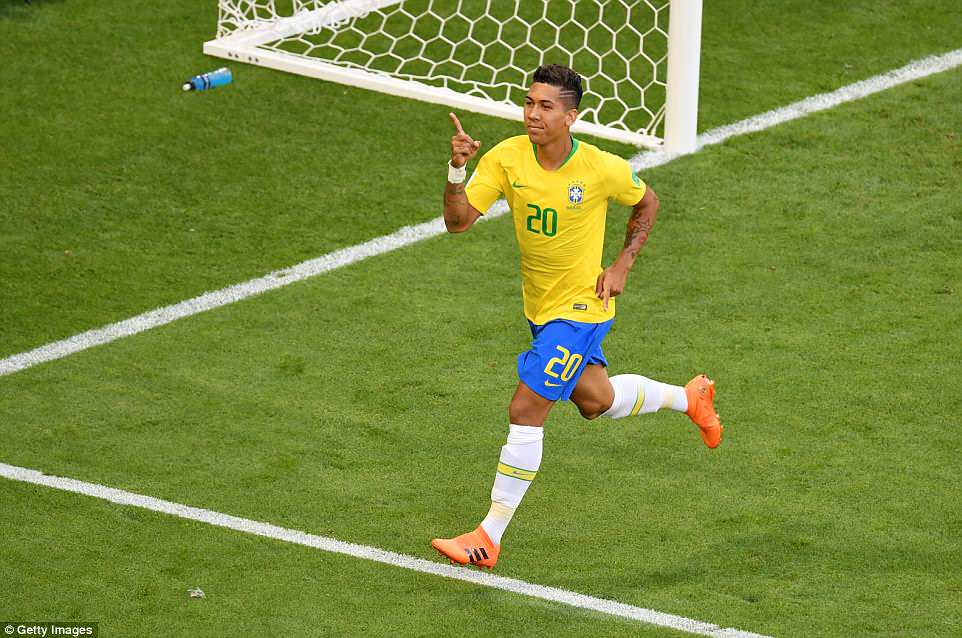 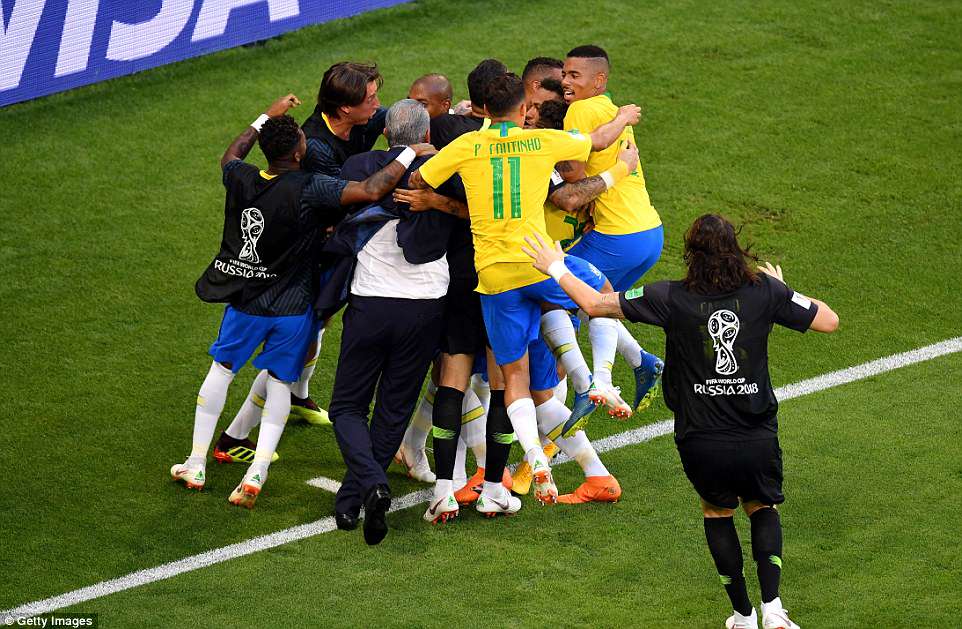 The goal also made Brazil the most prolific team in the history of the World Cup with 227 goals, surpassing Germany – who were knocked out in the first round for the first time since 1938 – with 226.

Ochoa was forced into another good save after 62 minutes when he pushed Chelsea star Willian’s fierce shot away for a corner.

As Mexico pressed for an equaliser Brazil’s Alisson saved from Carlos Vela before Andres Guardado tried his luck from outside the area but Brazilian defenders got in the way before the shot could test the goalkeeper.

There were fresh fears for Neymar when the striker went down in apparent agony after a clash with Mexico’s Miguel Layun, who replaced Marquez, but he was soon back on his feet while Layun escaped without punishment.

Mexico pushed forward but substitute Roberto Firmino wrapped the game up as Brazil broke away in the 88th minute, tapping in from close range after Neymar’s pass had deflected off Ochoa.

The two sides were in what is widely regarded as the more difficult half of the World Cup bracket, which includes France, Belgium and Uruguay as well as the two teams taking the field this afternoon.

Whichever team reaches the final from that side of the draw will face one of England, Colombia, Sweden, Switzerland, Russia or Croatia in the Moscow decider. 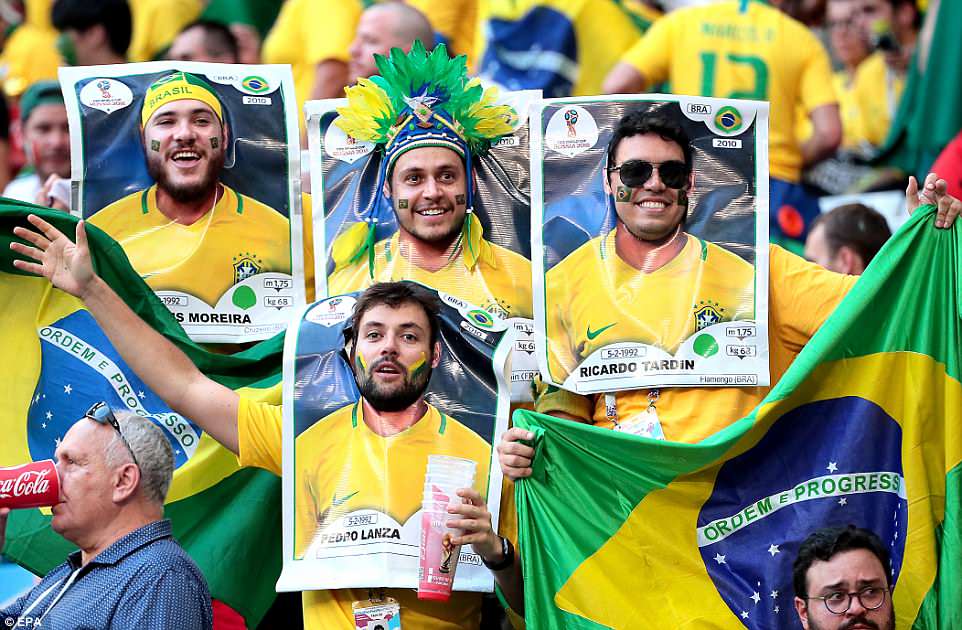 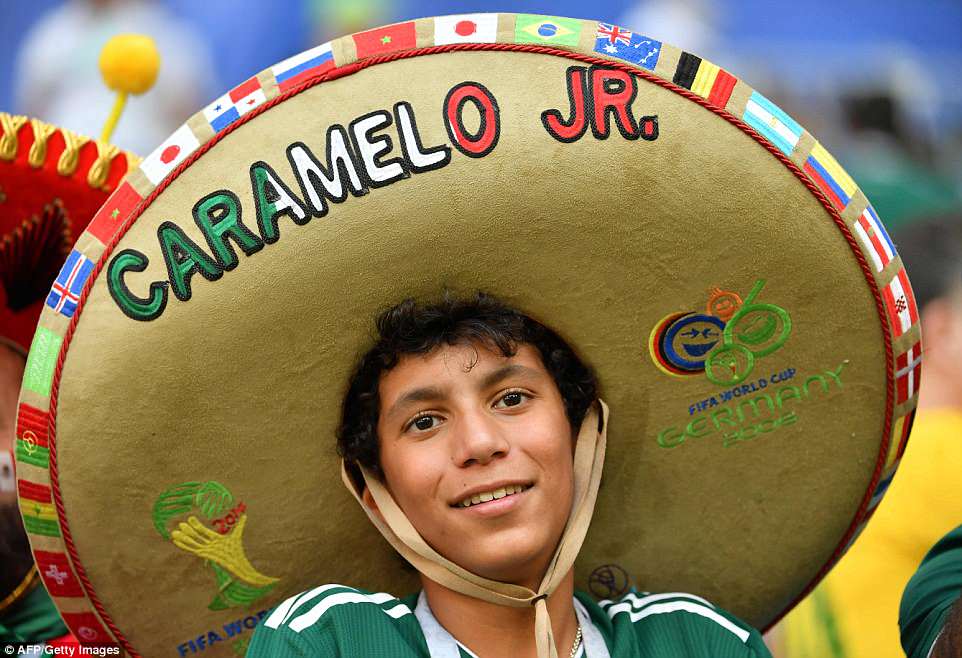 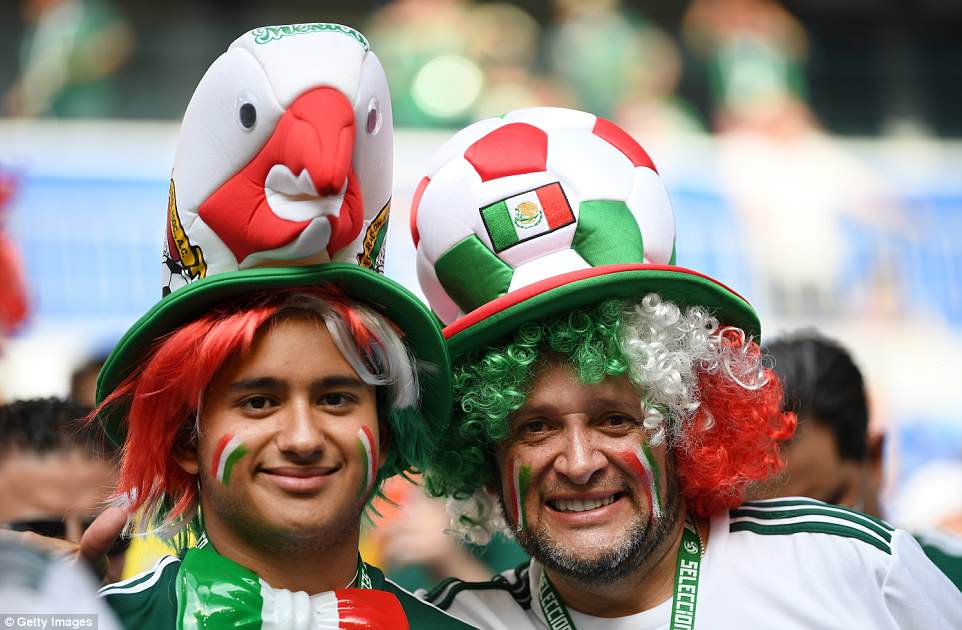 These Mexican supporters have gone all out with their outfits complete with hats, wigs and face paint 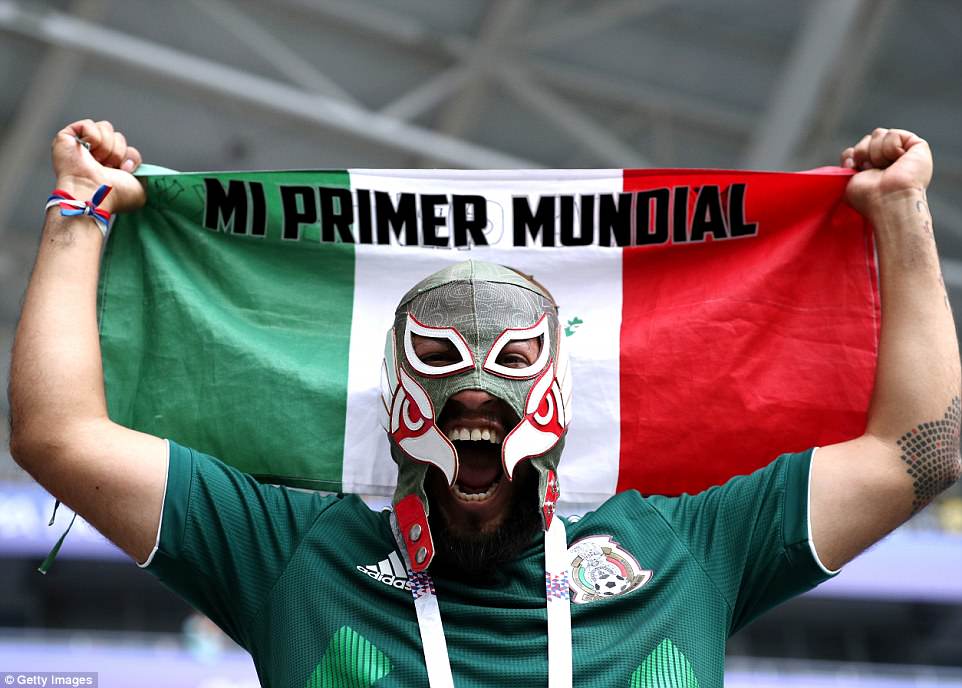 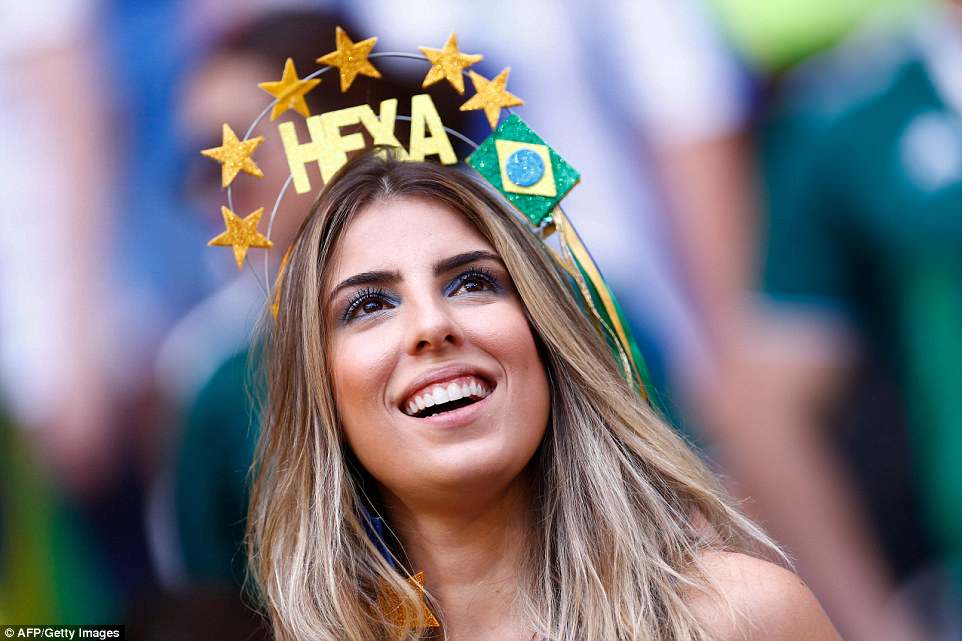 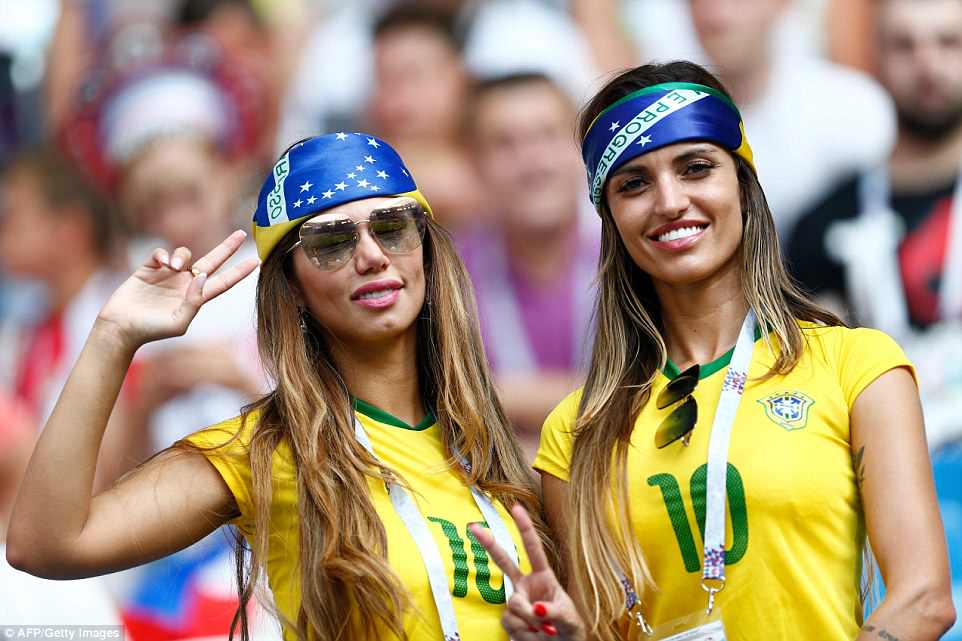 Headgear was the order of the day with few spectators seen without a headband, hat or headdress 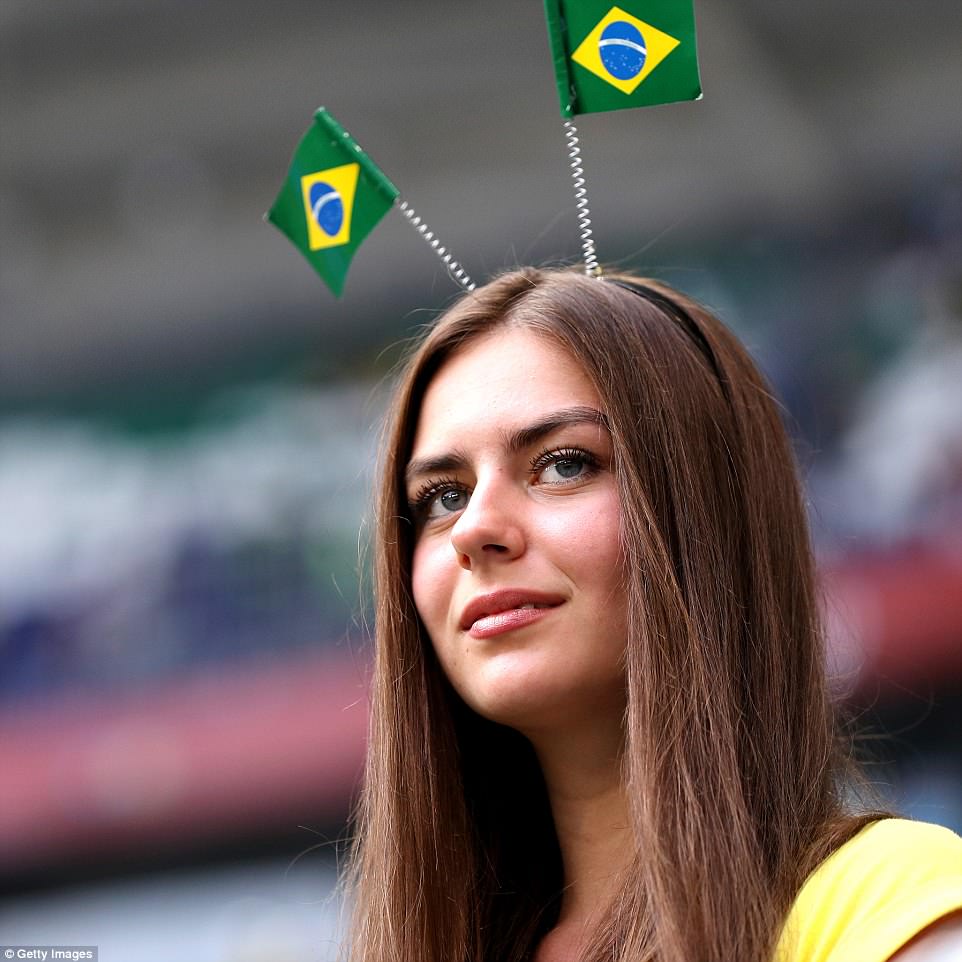 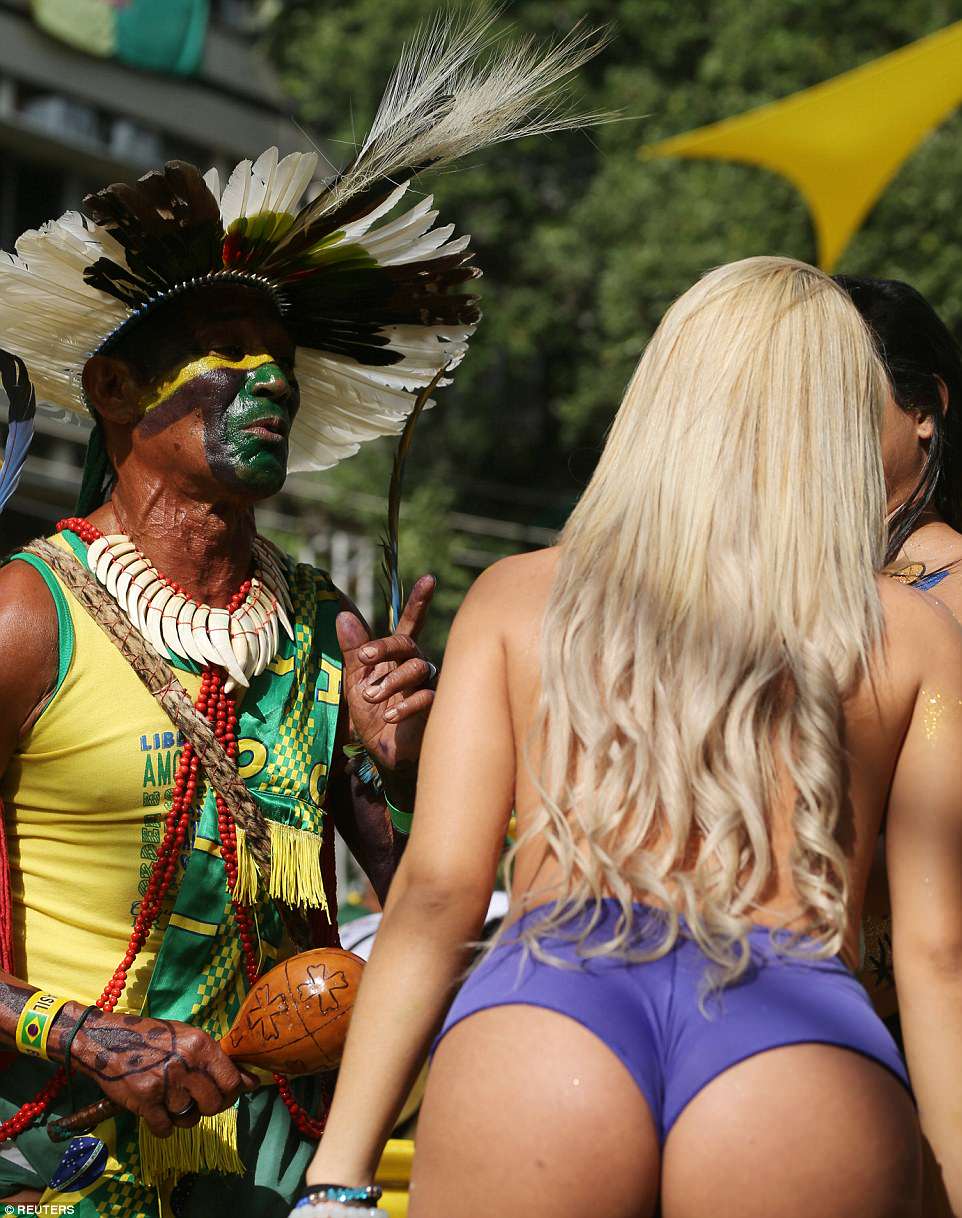 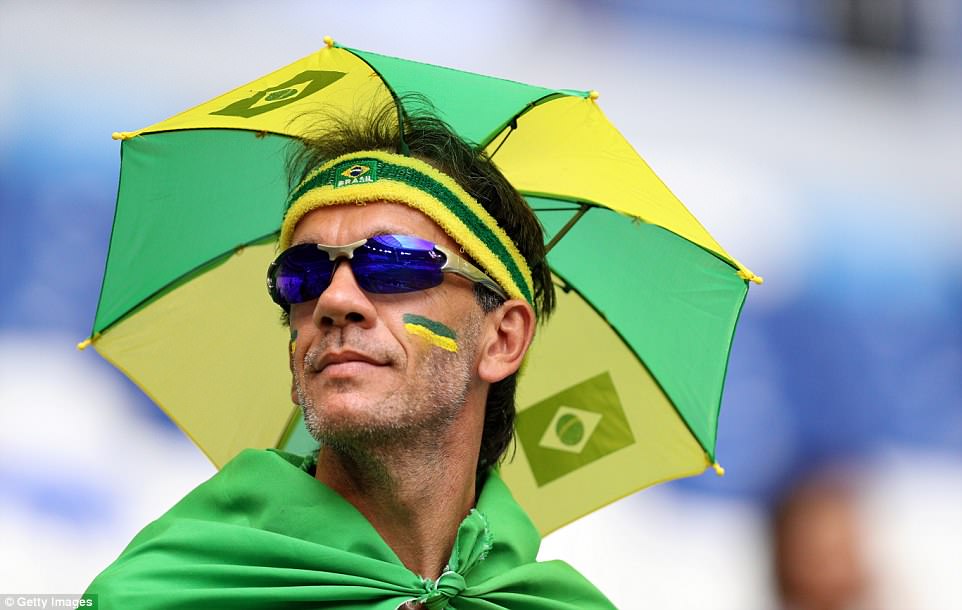 This Brazillian fan combined style and function, wearing a parasol on his head to keep off the afternoon sun