Gove’s war on crony capitalists: Minister says politicians must crack down on fat cat pay and those who have rigged the economy in their favour 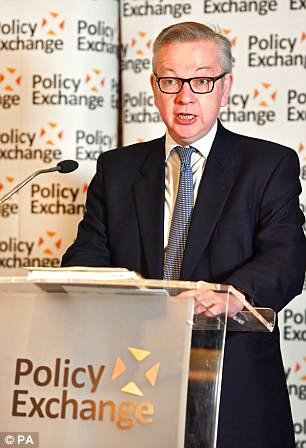 The Environment Secretary accused ‘crony capitalists’ of exploiting a ‘rigged’ capitalist system for their own gains.

He warned that the economic crash of 2007 and 2008 highlighted the need to reform the global economy.

And he said the failure to address failure in the capitalist system would fuel populist movements and help Jeremy Corbyn’s Labour.

His warning comes amid ongoing concern that bosses are rewarding themselves huge pay packets – with some FTSE bosses earning hundreds of times more than the average worker.

Last month it emerged that Mike Betts, the chief executive of Motability Operations which supplies cars to disabled people, is paid £1.7million a year.

MPs slammed the seven figure salary – which has soared 78 per cent pay increase in nine years – as ‘totally out of whack with reality’.

Mr Gove’s speech at Policy Exchange today will encourage suspicion in Westminster that he is plotting a fresh run for the Tory leadership.

Mr Gove said that, since the global crash of 2008, the outlook had grown ‘darker’ for the majority of people – particularly the young and those with low skills.

He said: ‘It is imperative we address that failure honestly and unsparingly, determined to identify where, and how, we have gone wrong, because, unless we rescue and re-invigorate capitalism, then we will find the engine which has generated so much of mankind’s progress either stalls or moves into reverse,.

‘Economic power has been concentrated in the hands of a few and crony capitalists have rigged the system in their favour and against the rest of us. 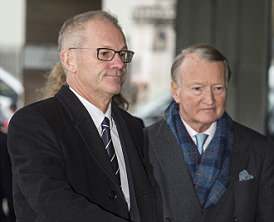 The boss of a firm supplying cars to disabled poeple was slammed by MPs for giving himself a fat cat salary.

His pay soared by 78 per cent in nine years – even though nationally wages have remained pretty stagnant.

Much of the company’s money comes form taxpayers who are paying for benefits for disabled people.

She said: I am going to be pretty direct. Mike, your salary is £1.7 million…

‘That is more than most chairs in FTSE companies earn. This is taxpayers’ money on benefits paid to people with disabilities.

‘Are you really running the company absolutely with that charitable ethos in mind?’

But Mr Betts defended his salary saying:  ‘I have worked myself in and with the public sector for many years.

You can never reconcile either the professional footballer or the chief executive of a major corporation with the student nurse.

However, my responsibility, and the responsibility of my board, is to put in place a management team that is capable of running this very large business.

‘Our politics, culture and regulatory models have worked against innovation, indeed have been pushed in that direction by powerful incumbents.

‘Many of our fellow citizens, especially those without the qualifications and connections to work the existing system, have seen less and less value placed on their work and themselves.’

Mr Gove said the Government must press ahead with plans set out by Theresa May to hold ‘irresponsible bosses, who reward themselves excessive pay rises’ to account.

The PM has announced plans to make bosses publish their pay gap with ordinary workers in the hope this will curb excessive salaries.

Mr Gove said that such economic trends had fuelled the rise of populist, left-wing movements across Europe – including Labour in Britain which was now more in tune with radical parties like Syriza in Greece and Podemos in Spain than ‘the movement of Attlee, Wilson, Callaghan and Brown’.

‘Since 2008, the outlook has grown darker for most. With productivity stalling, so unemployment has increased in many advanced economies, particularly among the young and those with fewer skills.

‘Wage growth has stagnated and expectations of future security have eroded as occupational pension schemes have been plundered or dissipated in value,’ he said.

‘These unfortunate trends have gone hand in hand with an increased concentration of wealth, and power, in the hands of the already wealthy and powerful.

‘It’s not just that members of the cognitive elite, the well-educated and well-connected, have the networks and mobility to insulate themselves from economic shocks, it’s also the case that deliberate policy decisions have rewarded those who’re already asset-rich.

‘These political currents pose a particular danger for the free market system which has generated so much wealth and opportunity in the past, and which I believe has the potential to do so again.

‘The current failure of capitalism to deliver prosperity and opportunity – as it has, can and should – has fed the revival of ideological movements which threatened, indeed harmed, free markets and human flourishing in the past.’ 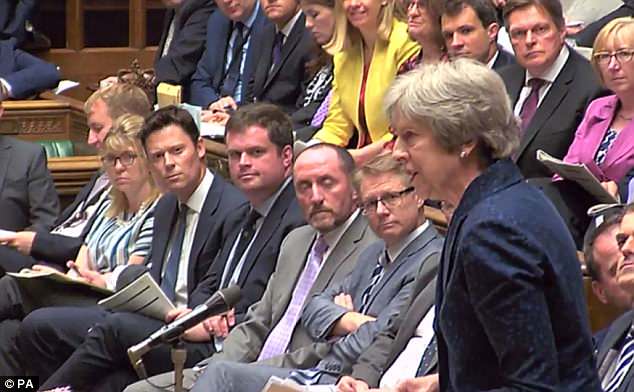