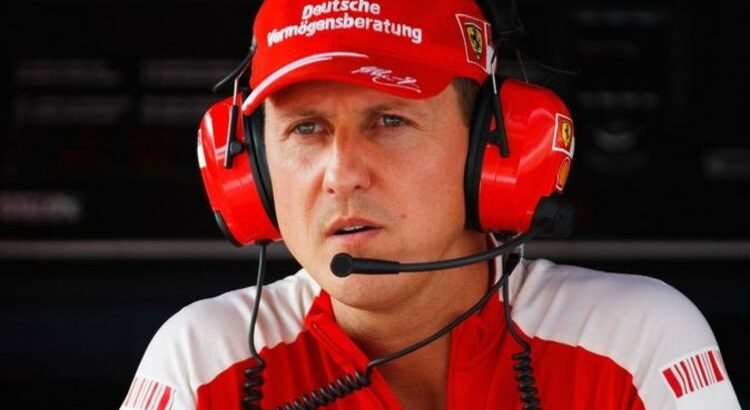 Schumacher, a seven-time world champion, has had his life examined in the new self-titled Netflix documentary, which was released earlier this month. ‘Schumacher’ explores his incredible career, which saw him become in many people’s opinion the greatest racer of all time, as well as rivalry with Ayrton Senna. It also offers viewers a first glimpse into his family life, with those closest to Schumacher detailing the aftermath of his skiing accident in 2013.

The 52-year-old is still recovering from the accident.

During the incident, he sustained a severe brain injury while skiing on the Swiss Alps.

In the documentary, his son Mick also spoke about how his father is having difficulty speaking.

Mick, now a racer with Haas in Formula 1, admitted he would “give up everything” to speak to his Dad again.

And friend Fisichella also once revealed how wanted to also speak to Schumacher – to tell him what a great driver Mick had become.

Fisichella, a fellow former F1 racer, explained how difficult the impact of his friend and old rival’s health had had on him during the touching interview.

He noted that “nothing is known” about the racing driver’s condition as the family “do not let us know anything about him”.

Schumacher was notoriously private after retiring from Formula 1, and would often say the publicity that came with his status was not something he enjoyed.

The new documentary, therefore, is even more insightful as it’s the first time the family has opened the doors to the world.

JUST IN: Schumacher told manager why his health is private: ‘Disappearing’

And speaking to Rai three years before the documentary was released, the 48-year-old said: “Having raced with him, he has given me so much, and the few times I came in front made me even more proud because he is a great champion.

“It is a cruel fate that someone who as a racer so often risked his life is badly injured while skiing.

“I would like to embrace him and talk to him. I would tell him how well his son Mick is developing, that he is winning races and maybe be world champion one day, like his father.

“I hope from the bottom of my heart that he can live a normal life again. Nobody knows what to tell me about his condition and that makes me very sad.”

Ex-Ferrari boss Jean Todt claimed he was still fighting after he visited the family home in 2020.

He explained he has “an amazing wife next to him”, along with his children, nurses and other medical professionals.

He added: “All I can do is to be close to them until I am able to do something, and then I will do it.”

Among those to pay tribute to Schumacher during the documentary was current F1 racer Sebastian Vettel, who noted how influential his fellow German was on him.

Vettel said: “He’s been my idol since I started driving go-karts. He’s been a big influence.

“The racing driver Michael Schumacher is my hero, my motivation to win races.

“The sport fascinates me and I know other racing drivers but there was nobody like him.”

Schumacher’s accident saw him undergo two “surgical interventions” before he was placed into a six-month, medically induced, coma.

The accident came as he was skiing in an unsecured area of terrain, where fell and hit his head on a rock.

He spent 254 days in hospital before he returned to his family home in Geneva, Switzerland.

The German has remained there ever since.