Tijuana: Central Americans who travelled in a caravan through Mexico to the border with San Diego have begun turning themselves in to US authorities to seek asylum in a challenge to the Trump administration.

The migrants began applying for protection at the nation's busiest border crossing on Monday, US time, after immigration officials said the facility didn't have space to accommodate the group. 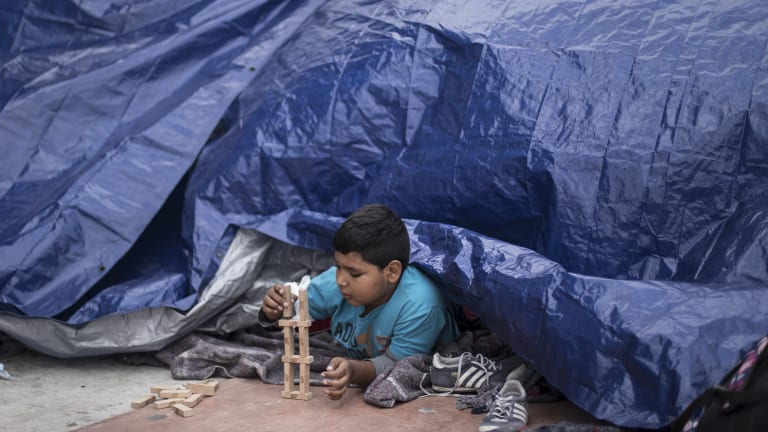 A migrant child from El Salvador plays under a tarpaulin at the El Chaparral port of Entry, in Tijuana, Mexico, on Monday.

US Customs and Border Protection didn't say how many were allowed in late on Monday but project organiser Alex Mensing of Pueblo Sin Fronteras (People Without Borders) said there were eight.

It marked the end of a month-long journey by foot, freight train and bus for the migrants, many of whom are fleeing violence in their home countries. 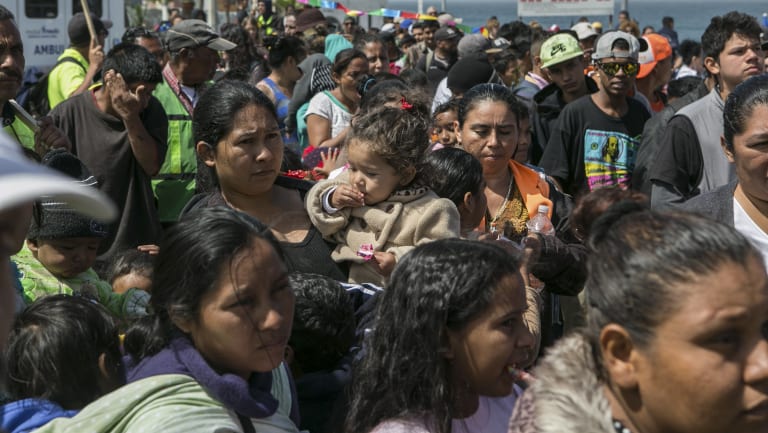 Families from a caravan of migrants from Central America who travelled through Mexico, wait for a meal near the US border wall in Tijuana.

The caravan got attention after US President Donald Trump and members of his Cabinet called it a threat to the United States.

Trump earlier said the caravan of migrants seeking asylum in the US showed the weakness of the nation's immigration laws. 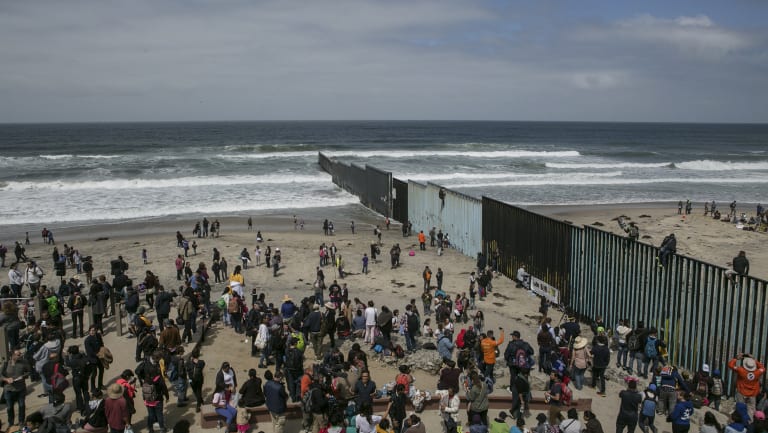 Hundreds of migrants from Central America who travelled in a caravan through Mexico gather with supporters at the border wall where it ends at the Pacific Ocean, in Tijuana, Mexico, on April 29.

Trump and other members of his administration have been watching and criticising the caravan of hundreds of Central Americans since they started journeying through Mexico a month ago.

The migrants tried to start applying for protection at the San Diego border crossing on Sunday. But American officials has said the facility was full and couldn't accommodate them.

Earlier about 200 asylum seekers were not allowed to turn themselves in to US border inspectors for a second straight day.

US Customs and Border Protection said the crossing facility had reached capacity.

Mexican authorities allowed about 50 people to cross a long bridge leading to the US inspection facility on Sunday but US authorities told them to wait.

Customs and Border Protection had promised it would resume processing when it had more space and resources.

Irineo Mujica of Pueblos Sin Fronteras said the earlier refusal was a "farce" aimed at avoiding having to deal with the asylum seekers.

Some people camped overnight on a sidewalk outside the Mexican entrance to the border crossing.