Roads to Hell! Millions of Britons will flood the roads for the Bank Holiday weekend… amid sweltering 86F heatwave and heavy storms crashing in from Europe

Millions of Britons are set to flood the roads this Bank Holiday weekend amid a sweltering 86F (30C) heatwave with thunderstorms crashing in from Europe across the south east and south west.

Meteorologists at the Met Office say areas in the south east of England could be double the usual temperature for this time of year, with the mercury hitting near-record levels on Bank Holiday Monday.

Britons basking in the warmer temperatures have been warned to plan ahead as Network Rail upgrade plans will see 400 sets of works taking place across the country over the late May Bank Holiday weekend.

No trains will be calling at Swindon station between Saturday and Monday, and buses will replace trains between Lancaster and Glasgow and Edinburgh. 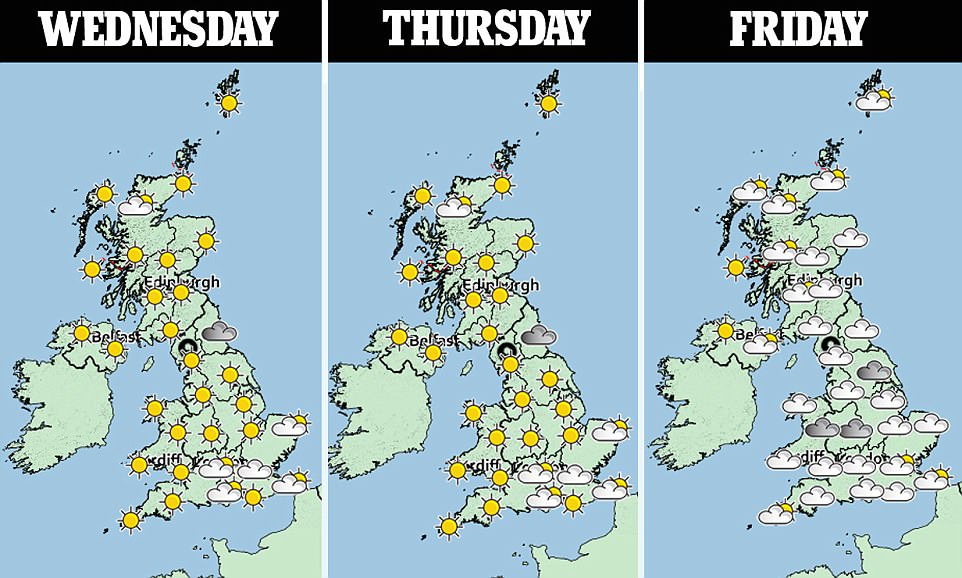 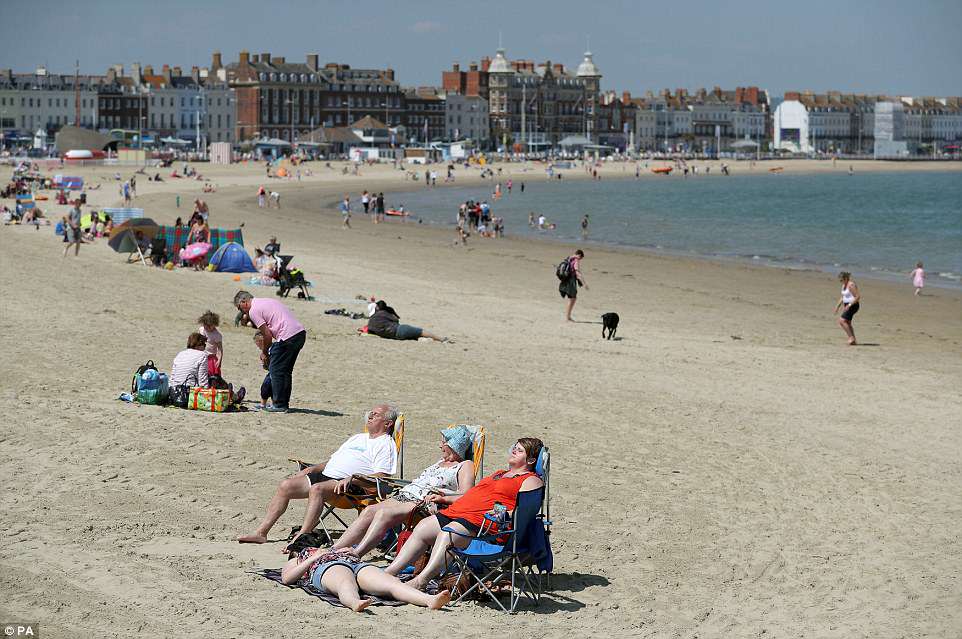 Brits have already been enjoying the warmer weather at Weymouth beach in Dorset today, but the Bank Holiday is set to bring even hotter temperatures with peaks of 86F (30C) 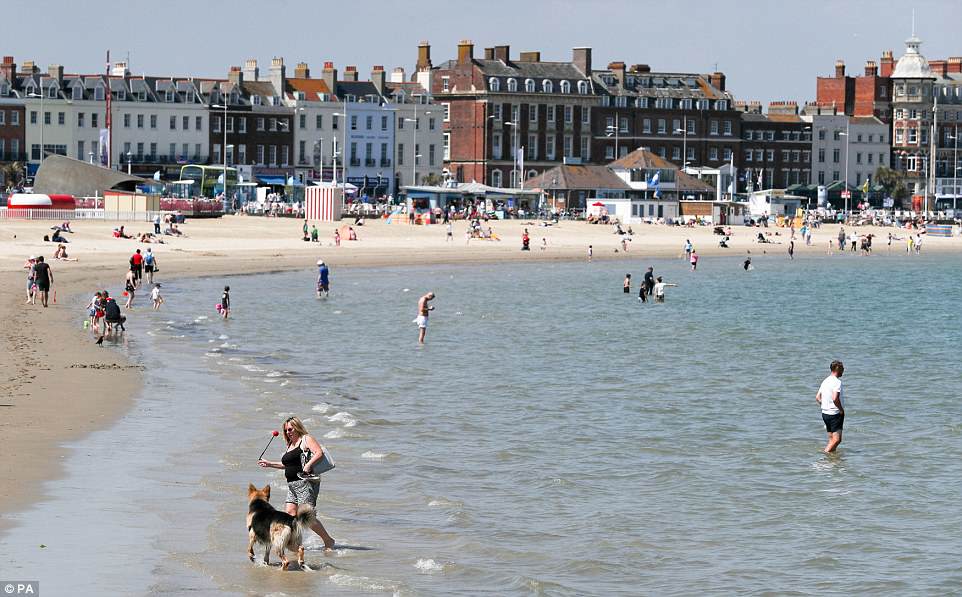 Roads are set to be packed with Brits heading off to the beach or away on weekend breaks, with 400 sets of works planned across Network Rail leaving many roads busier than usual (pictured: Weymouth beach) 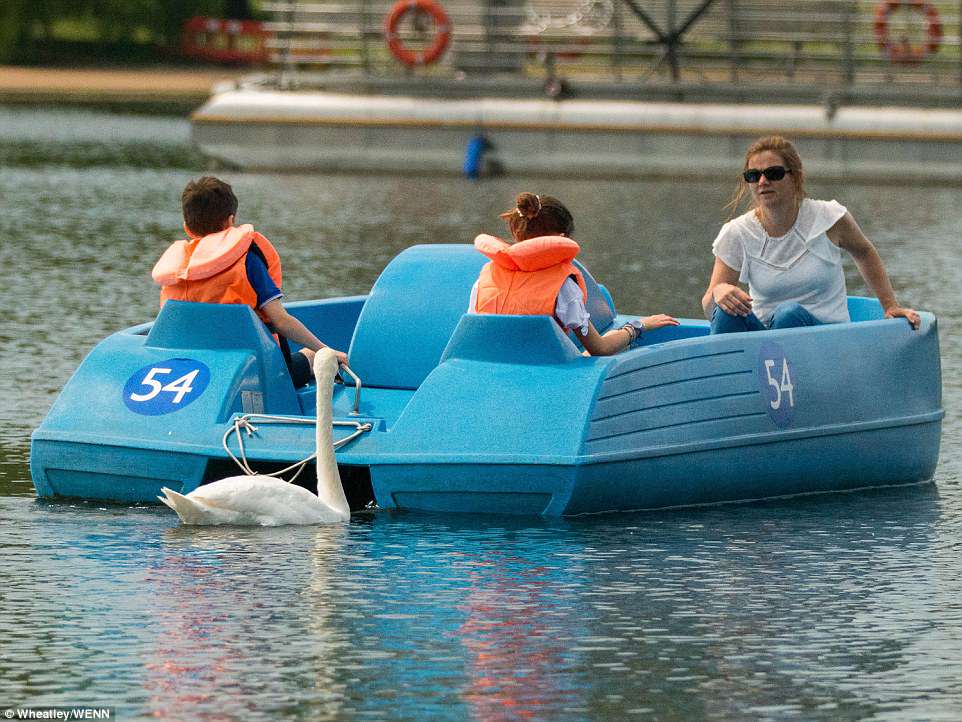 Londoners took advantage of the warmer temperatures to take boat trips along the Serpentine in Hyde Park, London, today

There will also be no trains between Romford and Upminster over the weekend, or between Barking and Liverpool Street, meaning the roads on certain routes will be far busier than usual as Britons rush off on weekend breaks.

Areas across Britain have already been enjoying the warmer weather, with Porthmadog in Gwynedd experiencing the hottest temperatures in Britain today, basking in 25C heat – warmer than some sunspots in the Mediterranean.

A Met Office spokesperson said: ‘The average temperature for this time of year is 15C (59F). Currently, temperatures are averaging 20C (68F) and are only going to get warmer this weekend.’ 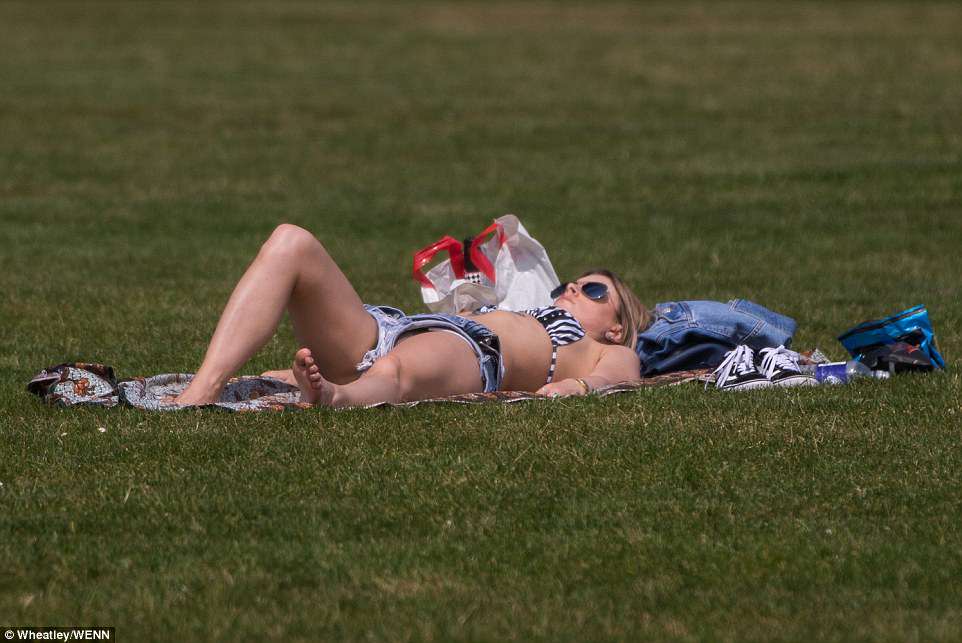 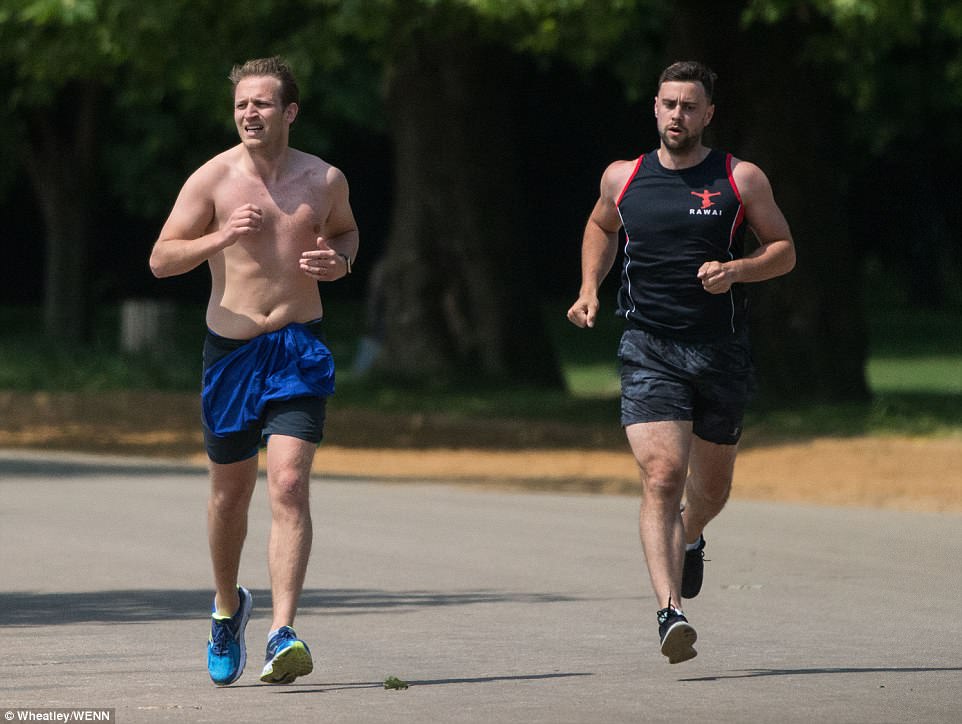 Rail improvement works between May 26-28

There will be no trains calling at Swindon station from Saturday to Monday.

Rail replacement buses will run between Lancaster and Glasgow and Edinburgh on Saturday and Sunday.

They added the record was not likely to be beaten this weekend.

On Saturday, temperatures in the south will be in the mid 20s, with London expecting to be around 25C (77F), while across the rest of the country it’ll be slightly cooler, in the low 20s.

With wind coming from the North East, Scotland is set to sit around the 18 degree mark at the start of the weekend.

There is a risk of thunderstorms in the build up to bank holiday Monday, with the south east and south west most likely to be hit.

The effect would be lower temperatures later on over the weekend.

Although May has seen above-average temperatures, early predictions suggest more unsettled weather is on the way and the mercury will drop to expected levels throughout the month. 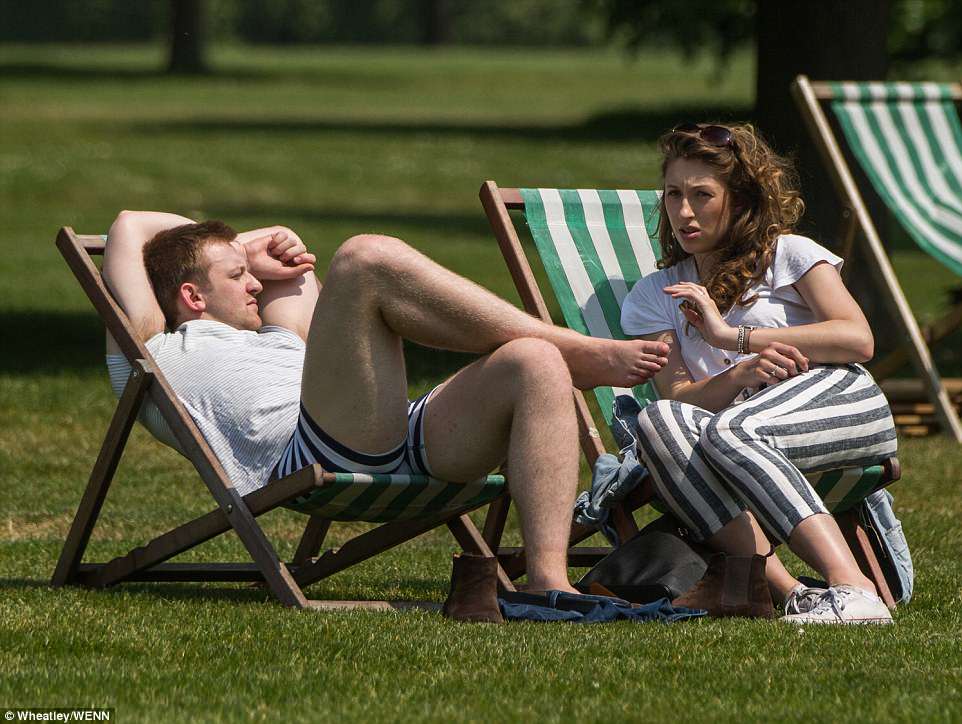 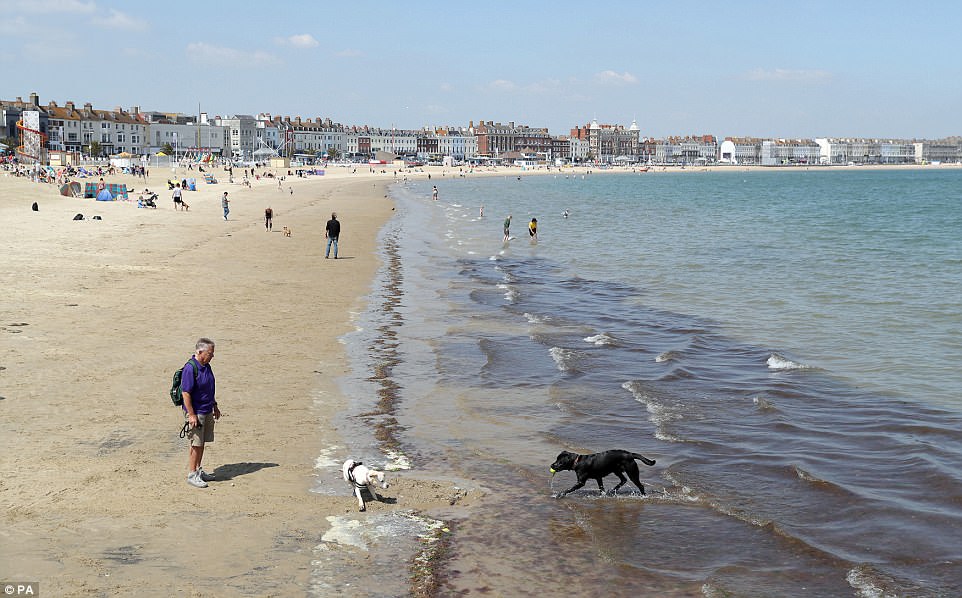 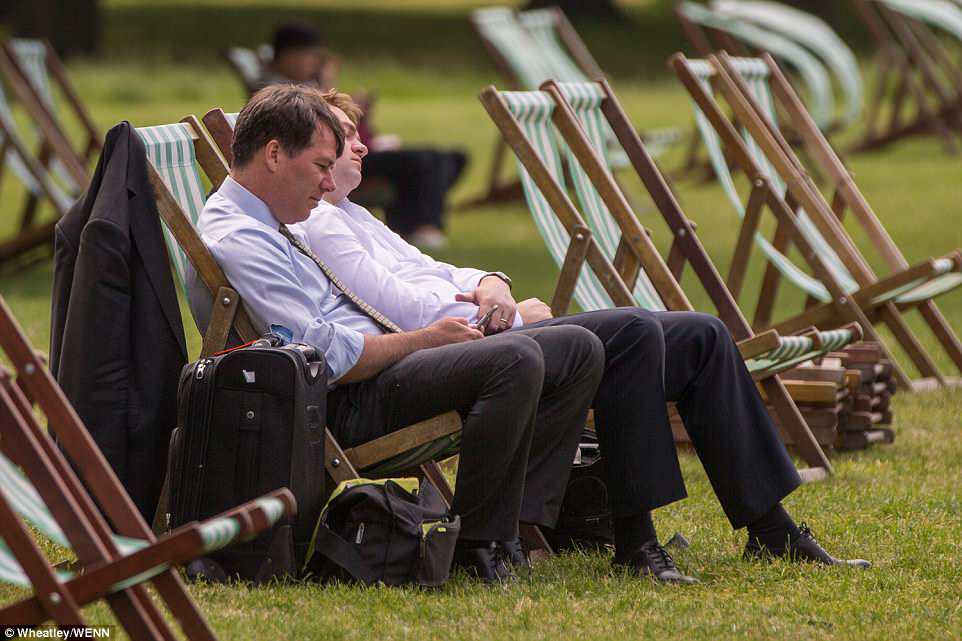 These two men in suits enjoyed the warm weather, with one of the men appearing to doze off in the heat