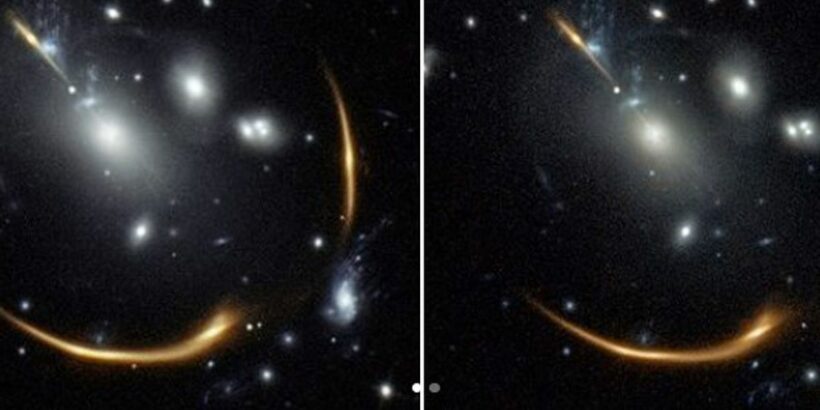 An image captured by a Nasa probe shows a mind-bending supernova blast which will "replay" 16 years from now.

The incredible prediction was made based on stunning photos captured by the Hubble Space Telescope.

Supernovas are star explosions which take place at the end of a sun's life.

This one, nicknamed Requiem, is set to "replay" in about 16 years due to the gravity from a huge galaxy cluster between us and the faraway supernova.

The space agency captioned the amazing images: "The gravity magnified and distorted the light from the supernova blast, splitting it into multiple copies.

"Three mirror images of Supernova Requiem were spotted by Hubble scattered in an arc-like pattern across the cluster.

"Each image shows the supernova’s light at different times after the explosive event, and a fourth copy is likely to show up in 2037."

The boffin agency admin wrote: “You can think about the supernova’s different light paths like this: Several trains leave a station at the same time, all traveling at the same speed and bound for the same location.

"Each train, however, takes a different route, and the distance for each route is not the same.

"Because the trains travel over different track lengths across different terrain, they do not arrive at their destination at the same time."

Though the idea that "supernova blasts" are a common feature of our universe still goes over the heads of almost everyone who doesn't work at Nasa, the concept is interesting enough.

And it's yet more evidence our universe contains more awe, wonder and confusion than we can ever understand.