We’ll be ready for ‘no deal’: Ministers step up plans for leaving without trade pact as EU negotiator hints Brussels will reject Theresa May’s blueprint

Ministers agreed to ‘step up’ preparations for a ‘no deal’ Brexit yesterday, amid fears Theresa May’s Chequers plan could be rejected by Brussels.

New Brexit Secretary Dominic Raab told his first meeting of the Cabinet that accelerating contingency plans would be one of his first priorities in the job.

Sources said Mr Raab is hoping to publish a plan for dealing with a no deal Brexit before MPs break for the summer later this month.

Chancellor Philip Hammond finally released £3billion for no deal preparations in the Budget last November, following months of lobbying by ministers. But half of the money has been held back until after the UK leaves and ministers agreed at Chequers last week that more work is needed. 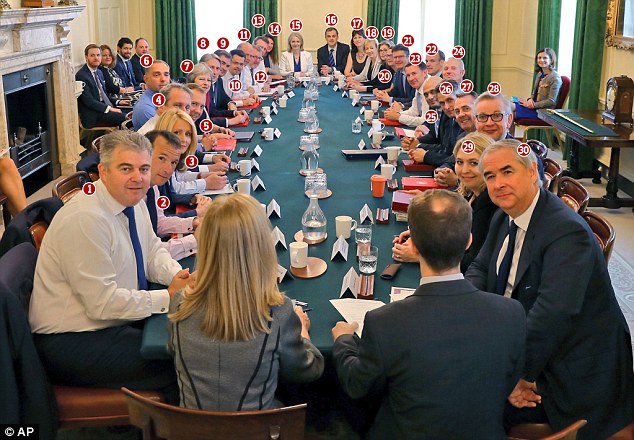 Yesterday, it was revealed that the Ministry of Justice has already been handed £17million to prepare for a no-deal Brexit.

Justice Minister Lucy Frazer revealed that the Treasury had freed up the funds to ensure the MoJ ‘are ready for’ a no deal.

The revelation came after a question in the Commons from Tory backbencher William Wragg.

Justice Secretary David Gauke yesterday said that leaving the EU without a deal was ‘not an attractive proposition’.

But, with time running out ahead of the UK’s departure next year, Mr Gauke said ministers had a duty to accelerate preparations. ‘It is absolutely right that we prepare for no deal,’ he said.

‘We cannot rule out that that is where we will end up for one reason or another.’

Mrs May warned MPs on Monday there was a ‘serious risk’ of Britain leaving without a deal if the EU rejects her latest compromise proposals.

She added: ‘A responsible Government must prepare for a range of potential outcomes, including the possibility of no deal, and given the short period remaining before the conclusion of negotiations, the Cabinet agreed on Friday that these preparations should be stepped up.

‘But at the same, we should recognise that such a disorderly no deal would have profound consequences for both the UK and the EU, and I believe that the UK deserves better.’

Privately, Whitehall insiders believe Mrs May will be unable to go much further in offering concessions to the EU. 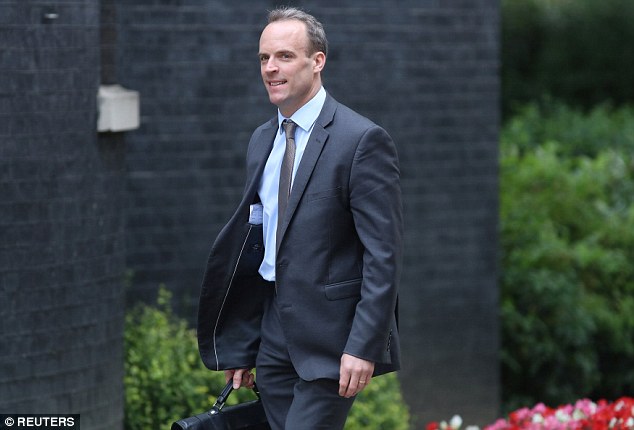 New Brexit Secretary Dominic Raab, pictured, told his first meeting of the Cabinet that accelerating contingency plans would be one of his first priorities in the new job

One said: ‘If the EU won’t agree then we have got a very serious problem with the negotiations at that point.’

EU leaders have so far given a muted reaction to Mrs May’s Chequers deal, saying they want to hear more detail before passing judgment. But the EU’s chief negotiator Michel Barnier yesterday suggested he was sceptical about Mrs May’s idea of the UK retaining full access to the single market without signing up to all the rules.

Speaking at the Council on Foreign Relations in New York, Mr Barnier repeated that the single market and the four freedoms – goods, capital, services and labour – were the ‘the fundamental principles on which the EU is based’ and would be defended.

Mr Barnier said 80 per cent of the issues surrounding the UK’s exit had now been resolved.

But asked if he was worried other countries might follow Britain’s lead, Mr Barnier said: ‘Once again, I regret profoundly this vote of the UK, we respect it and we implement it.

‘But it’s day after day more clear… I can tell you that it will be clear, clear, crystal clear at the end of this negotiation, that the best situation with the best relation with the EU, will remain to be a member of the EU.’

He said that the EU would not accept Mrs May’s proposal for an exception for the financial industry from EU rules. He added: ‘It would go against all our objectives… I don’t know any country in the world that would accept such a loss of sovereignty.’

He then half joked: ‘I have no personal experience of divorce, it’s always costly and unpleasant’.

The German Chancellor also did not outright dismiss Mrs May’s idea of the UK retaining full access to the single market without accepting free movement.