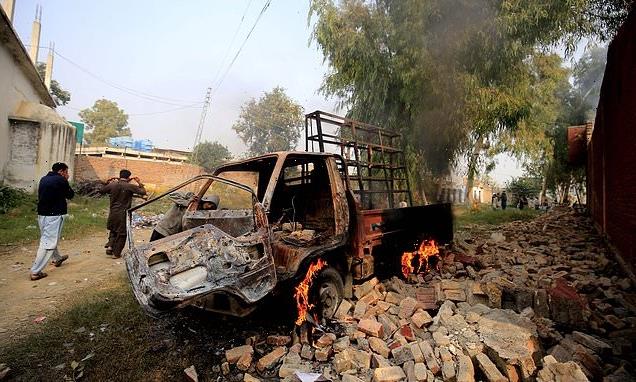 5,000-strong lynch mob torch police stations in Pakistan and demand cops hand over blasphemy suspect so they can ‘burn him alive like he burnt the Holy Koran’

A 5,000-strong mob has burned multiple police stations in Pakistan while demanding officers hand over a man accused of torching a copy of the Koran.

The crowd gathered outside the police station in the town of Charsadda, in northern Pakistan, late Sunday after learning cops were holding a man accused of blasphemy.

Thugs demanded police hand the man over ‘so we can burn him alive the way he burned the Koran’, before settling light to the station and surrounding checkpoints. 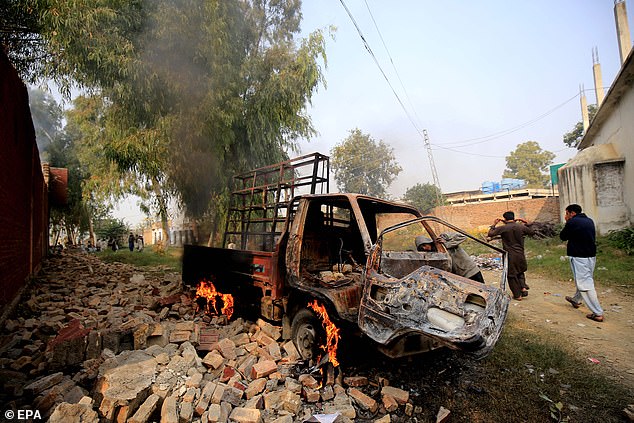 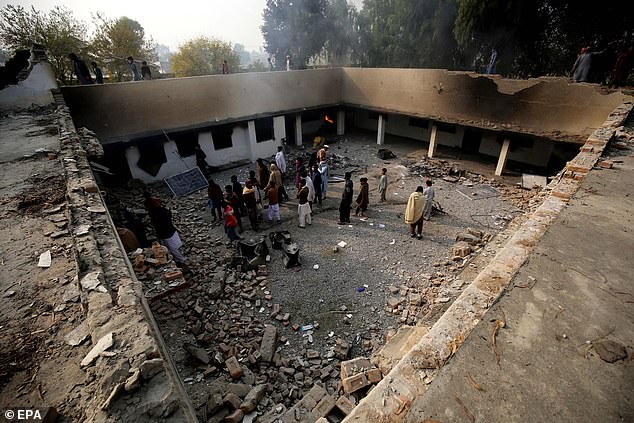 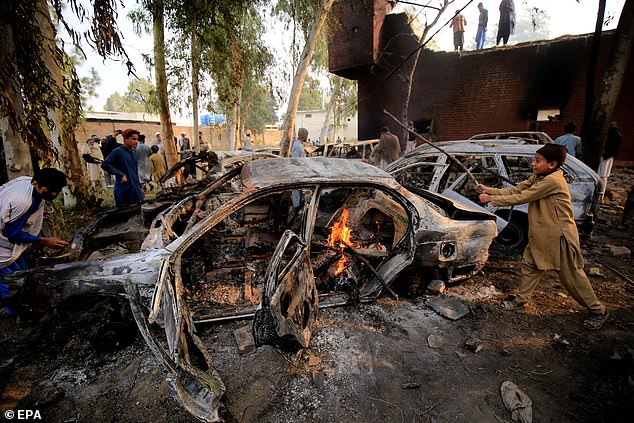 2,000 people were still at the police station on Monday morning, as local officials said troops have been called in to restore order

Around 30 cars were also torched in a night of anarchy that continued into Monday morning when around 2,000 people remained at the scene.

‘The mob stormed the station asking to hand over the man to them so they could burn him alive like he burnt the Holy Koran,’ district police chief Asif Bahadur said.

The identity and religion of the accused has not been disclosed by police, Bahadur said, but described him as ‘mentally impaired’.

‘The motive behind burning the copy of the Holy Quran is still unknown but we are investigating.’

No officers were hurt in the attacks, which forced the police to summon troops to restore order, local officer Asif Khan said.

Khan said officers foiled an attempt by the mob to lynch the detainee and the police moved him to another district.

He did not disclose the name of the man, saying officers were still investigating and the suspect was arrested a day ago.

He said police avoided the use of force to prevent casualties among demonstrators.

The situation in Charsadda was normal Monday, he said, and law enforcement was seeking to arrest people linked to the attacks.

Blasphemy carries the death penalty in Pakistan, where mere allegations of the offense are often enough to provoke mob violence.

International and domestic rights groups say accusations of blasphemy have often been made maliciously to intimidate religious minorities and settle personal scores.

A Christian couple was lynched then burnt in a kiln in Punjab in 2014 after being falsely accused of desecrating the Koran. 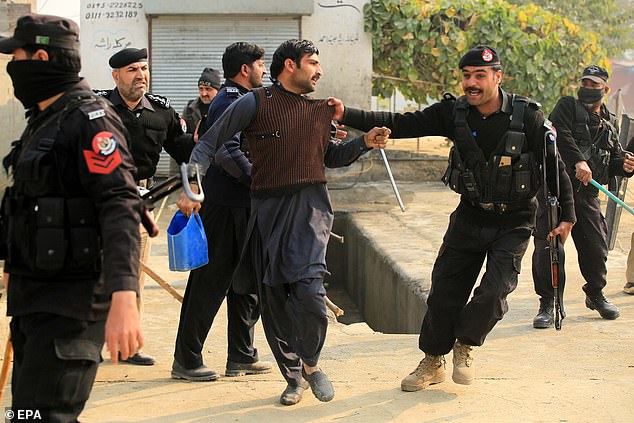 Police arrest people who continued to protest on Monday, after saying they moved the suspected blasphemer to another station due to fears for his safety 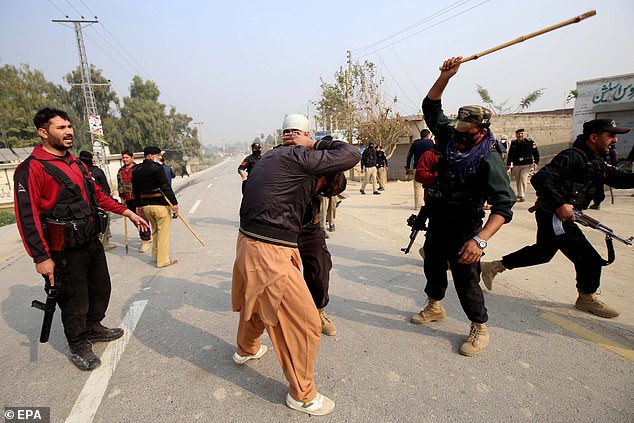 A former Punjab governor Salman Taseer was gunned down by his bodyguard, Mumtaz Qadri, in Islamabad in 2011 over his call for blasphemy law reform.

Asia Bibi, a Pakistani Christian woman and a labourer from central Punjab province, was convicted of blasphemy in 2010 and was on death row until her acquittal in 2018, which prompted days of violent Islamist demonstrations.

She and her family later fled the country for Canada.

In 2017, a group of students at the Abdul Wali Khan University in the northwestern city of Mardan attacked and killed another student, Mohammad Mashal, after accusing him of sharing blasphemous content on Facebook.

The country has frequently been paralysed in recent years by anti-blasphemy protests waged by the Tehreek-e-Labbaik Pakistan party.

Demonstrations are often linked to the publishing of cartoons depicting the Prophet Mohammed by a French satirical magazine.