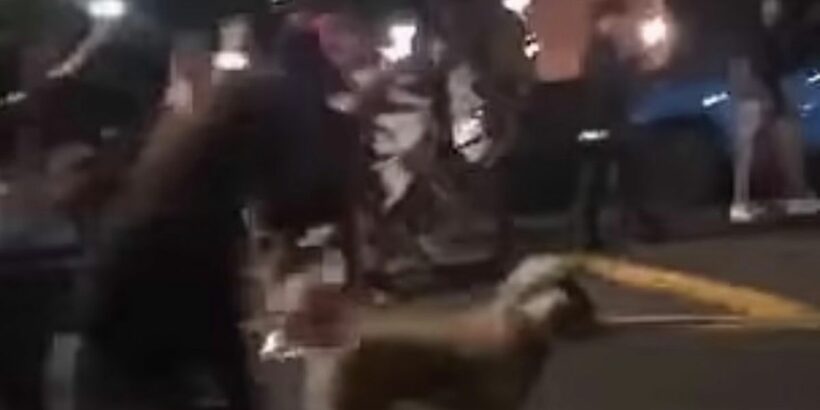 An off-duty firefighter taking his dog for a walk in the park was ambushed by a gang of teenagers who beat him up, with the evidence recorded in a grim video by a witness.

In the clip, recorded on Friday, July 23, the 44-year-old firefighter is walking with his Labradoodle Dylan, three, in the Queens neighbourhood of New York.

The streets are dark and it is just before 10 pm in Juniper Valley Park when the teenagers start behaving aggressively towards him.

He is walking backward away from the mob, while they jeer at him and his dog Dylan barks and looks confused.

An object is lobbed at his head and he seems to be trying to get away in haste from the baying mob.

The firefighter is then pushed to the ground and multiple teens beat him with their fists and kick him.

In the caption of what appears to be a Snapchat video the uploader wrote: "Holy shot [sic] old guy with a dog just got f***ed up".

The firefighter, who wanted to remain anonymous, spoke to New York Post after the ordeal and said there were "at least 100 kids" involved.

He thinks he got picked out for no reason and said the attack started when he was struck on the back of the head with a glass bottle.

"I got hit, turned around, that's when the kids started coming at me," he said.

"Then I was on the floor, holding one kid."

He believed that a nearby ambulance saved him and his injuries could have been a lot more serious without intervention.

He said: "If they weren't there I would have been in much worse condition. I'm a little lumped up. What are you going to do?

"Thank God I'm still here. It could have been worse."