This is moment that Gerry Adams’ home was attacked with explosives hurled from a moving car as the New IRA had the finger pointed at them.

CCTV footage shows a car driving slowly past the former Sinn Fein president’s home as a bundle of fireworks is thrown on to his drive.

The device hit the windscreen of a car, exploding feet from where Mr Adams’s young grandchildren had been standing minutes earlier and sending smoke billowing towards his home in west Belfast.

At the same time on Friday night, another firework device was thrown at the west Belfast home of his close ally Bobby Storey, a prominent Sinn Fein leader who is head of the party in Belfast.

Police said there were no reports of any injuries in either attack as suspicion immediately fell on the dissident Republican group the ‘New IRA’ after a week of violence in Londonderry which culminated in 70 petrol bombs being thrown at police officers. 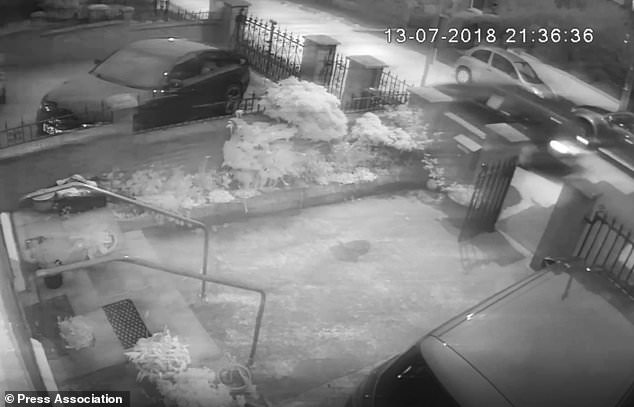 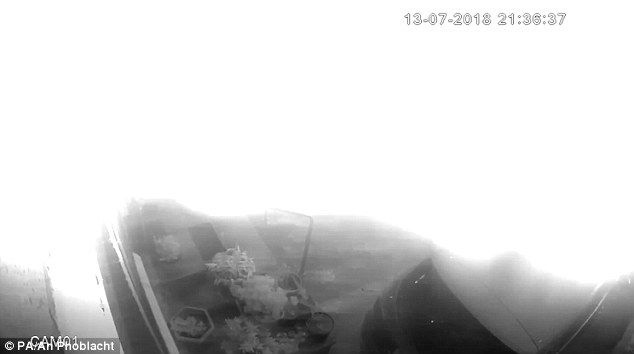 There is a bright flash of white light as the bomb, believed to be an industrial firework, explodes on Adams’ drive 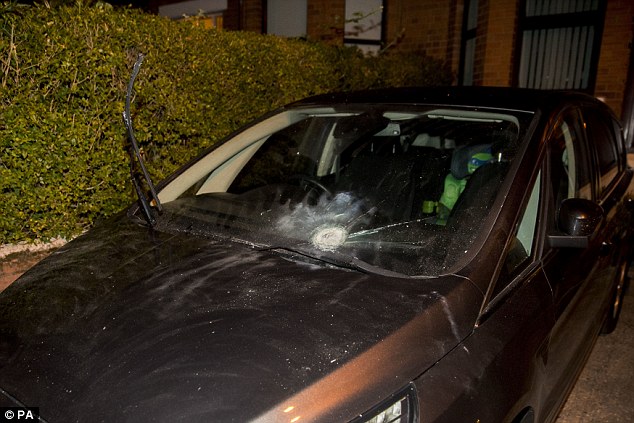 This car parked on Mr Adams’ driveway was damaged during the attack. It’s windscreen was left with a blast mark after an explosive device was thrown

The New IRA are said to have contacted Sinn Fein overnight to maintain that they did not order any attack and will help root out those responsible.

The dissident Republican group is said to have pointed the finger at gangsters in the Turf Lodge area of west Belfast.

A senior source told Sunday Life: ‘This attack will not go unpunished. A lot of people are looking for those behind this.

‘Dissident leaders are under pressure to act to show they didn’t authorise this and to deal with the bombers.’

The CCTV footage has been shared with detectives from the Police Service of Northern Ireland (PSNI), who are investigating.

Significant damage was visible to a vehicle on Mr Adams’ driveway in the aftermath of the attack.

Dissident republicans are hostile to Sinn Fein, and in particular Mr Adams and Mr Storey, for having led the IRA away from violence and into supporting the party’s entry into mainstream politics.

Mr Adams, 69, has long been accused of being on the IRA’s ruling army council at the height of the Troubles, during which 3,600 died including soldiers, police officers and civilians. Although he attended the funerals of IRA terrorists, he has always denied being a member of the IRA.

He led Sinn Fein from 1983 until February this year, and helped negotiate the 1998 Good Friday Agreement which led to the IRA laying down its arms. 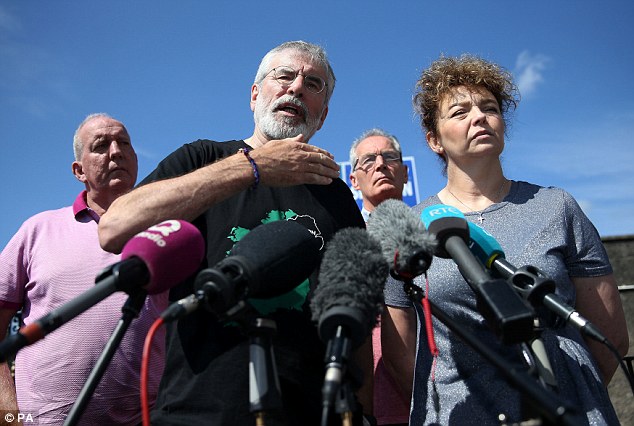 Gerry Adams, speaking at a press conference over the weekend, called on those responsible for bombing his home to have the guts to ‘sit down and explain to me what this is about’ 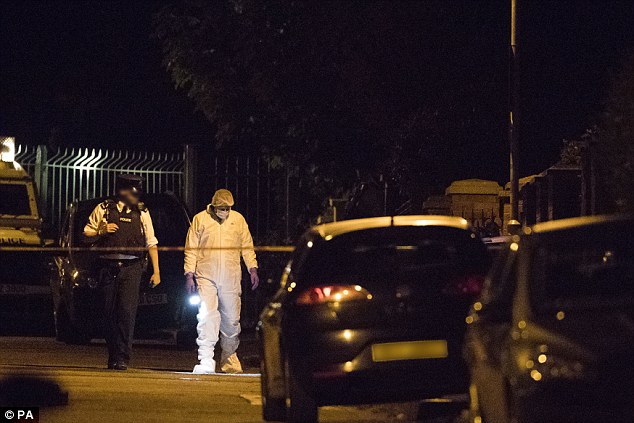 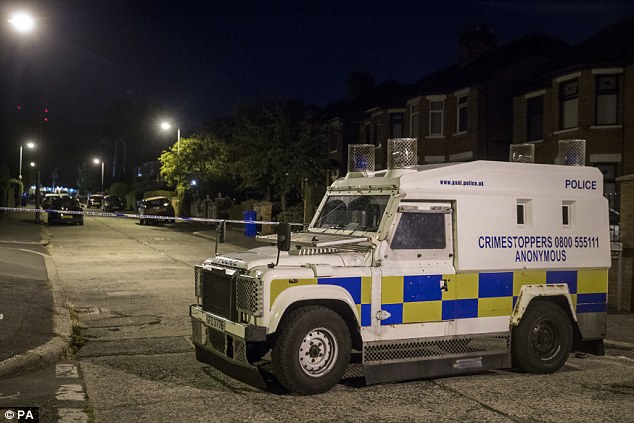 A police van parked nearby Mr Adams’ home, which was targeted on Friday, as they keep watch over his home

Mr Storey was involved in the Maze Prison breakout in 1983, in which 38 IRA prisoners escaped from the maximum security jail.

Hours before the two attacks, Northern Ireland’s police chief, George Hamilton, had blamed the New IRA for a surge in violence in Londonderry. The chief constable said: ‘We believe there are members of a variety of dissident groupings in this disorder. The New IRA is probably the primary grouping behind this disorder and behind these threats to police and these murderous attacks on police.’

On Saturday Mr Adams appeared to draw a link to the same group as he issued a personal challenge to his attackers to have the ‘guts’ to talk to him.

He said: ‘I am very thankful that no one was hurt. Two of our grandchildren were in the driveway of my home ten minutes before the attack. For those who were involved in the attack if they have the gumption to sneak up on our homes I think they or their representatives should come and meet me. I would like them to have the guts and the gumption to sit down and tell what this is about.’

Mr Adams added: ‘Those who are away from the peace process see us as the enemy and have made threats against us in the past. Martin McGuinness was under a live threat.

‘This was a serious attack. Had a child or anyone else been caught up in that blast, it would have injured or perhaps killed a child.’ 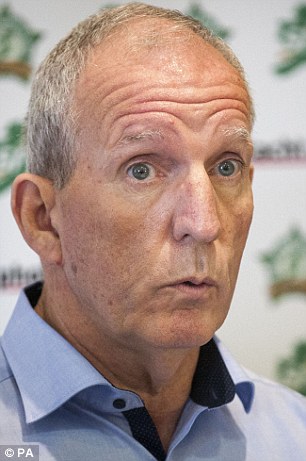 Local reports have also raised the possibility that the attacks could have been the work of criminal elements hostile to Sinn Fein and seeking to capitalise on the tense atmosphere in Belfast during the July 12 loyalist commemorations. But there has been no claim of responsibility.

It comes at a sensitive time for Northern Ireland, following the collapse of power sharing between the Democratic Unionist Party and Sinn Fein at Stormont last year and the repeated failure to restore devolved government.

A solidarity rally is being held on Monday evening at the site of the former Andersonstown police station in west Belfast, for the families of Mr Adams and Mr Storey.

It is also being held for the people of Derry who last week endured six consecutive nights of disorder.

Sinn Fein president Mary Lou McDonald will be the main speaker at the rally which will also be attended by Mr Adams and Mr Storey.

‘Those involved are opposed to the peace process and the process of change,’ he said. Police officers outside Bobby Storey’s home in Belfast, which was targeted with an explosive device on Friday night

‘Monday night’s rally is an opportunity for the people of Belfast to come out to show solidarity with the families of Gerry Adams and Bobby Storey and the people of the Bogside in Derry and send a message to those involved in attacks on republicans and on the community to stop immediately.’

Friday’s attacks in west Belfast came after six successive nights of dissident-orchestrated violence in the republican Bogside neighbourhood of Londonderry.

Sinn Fein leaders, including Ms McDonald, were scathing in the criticism of the extremists behind the rioting and attacks on police in Derry.Mr Adams led Sinn Fein from 1983 until February 2018, while Mr Storey has served as the party’s northern chairman.