He strikes the bike’s disc lock repeatedly with the tool while two accomplices nervously keep watch.

It’s yet another dispiriting example of the misery scooter gangs are currently causing all over Britain.

And it comes just a day after Britain’s Got Talent Judge Amanda Holden shared a terrifying clip of a pair of moped muggers targeting a mum and her three-year-old girl in Lawless London.

This footage – filmed in Birmingham city centre from an overlooking building – shows one of the gang strike the bike lock five times.

He then pauses briefly before attacking the lock another four times. 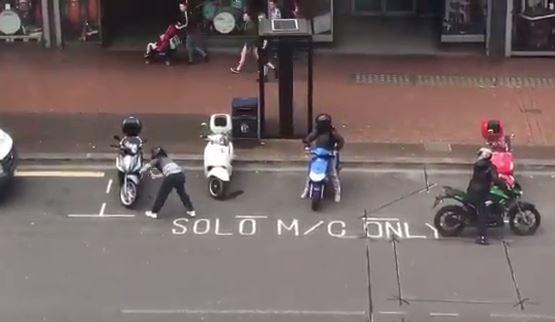 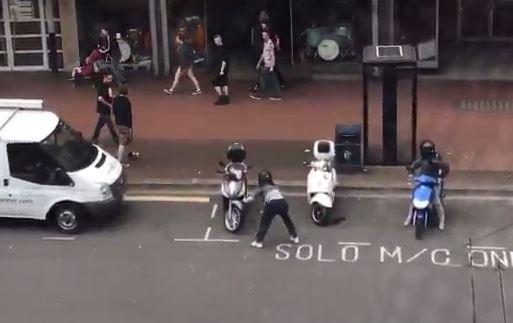 Unable to dislodge it he then hops on the back of another bike and is driven away from the scene by an accomplice.

Taxis can be seen driving along Smallbrook Queensway while shoppers go about their business during the attempted theft on the afternoon of June 4.

The bike’s owner, Liz Dziergas, from Edgbaston, Birmingham, told Birmingham Live: “What worries me is that they carry weapons and general public is scared to stop them.

"They truly think that they are above the law, untouchable, and are not afraid to do it in a daylight in front of general public on a busy city centre road.” 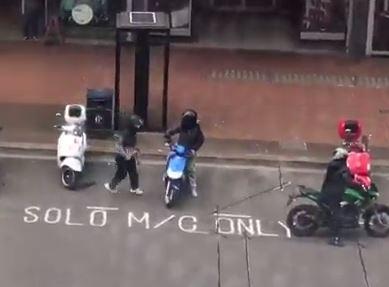 West Midlands Police say they have received no reports of an attempted theft.

It comes as London has been hit by an explosion of moped gang crime with 60 incidents recorded each day.

And it follows recent praise of Manchester cops who were caught on camera using scrambler bikes to apprehend moped thugs on a busy roundabout.

The riders are seen cheerfully chatting to each other but their conversation is suddenly cut short when the pair of specialist bike cops surround them. 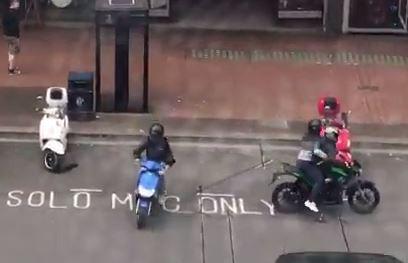 One clips the scooter on the right-hand knocking it to the ground before its rider makes off on foot.

It comes to a halt in front of the mopeds.

The other scrambler bike approaches from behind before grabbing the passenger on the remaining scooter by the scruff of his neck.

It saw 111 robberies last year with just one crook nailed so far.

Earlier this month Michael McIntyre 42, had his £15,000 Rolex torn from his wrist by moped thieves in London.

It came as one moped gangster laughed as he revealed he could make £1,500-a-DAY stealing from innocent victims in Lawless London and boasted cops are powerless.