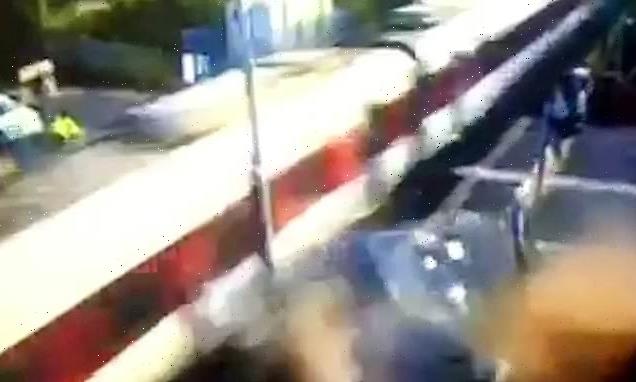 Terrifying moment drink-driver, 27, smashes Range Rover into speeding TRAIN at level crossing… then crawls from wreck to call his MOTHER for a lift

This is the horrific moment a drink-driver smashed his Range Rover into a speeding train causing £345,000 worth of damage and delays to the rail network.

Rail worker Michael Rochford, 27, has been jailed for 10 months after he admitted perverting the course of justice, failing to stop following a road traffic collision and dangerous driving.

Shocking CCTV footage captured the moment his 4×4 collided with an LNER Azuma train at the Rossington level crossing on the East Coast Main Line near Doncaster, South Yorkshire, on June 13.

The train sustained damage while several passengers suffered whiplash injuries and a man in a nearby garden narrowly missed being struck by falling debris.

Rochford, who worked for Network Rail as a signalling technician, had been drinking with pals at Rossington Main Football Club before the crash, a court heard.

Witnesses waiting at the crossing described seeing his Range Rover Sport approaching the barriers at speed, mounting the pavement and striking the train.

Rochford then crawled out of the vehicle and ran away, appearing unsteady and drunk, the court heard.

He called his mother for a lift, and then reported to police the car keys had been taken from the football club bar and his car had been stolen.

The court heard he then claimed to have been told by his brother that it had been involved in an accident. 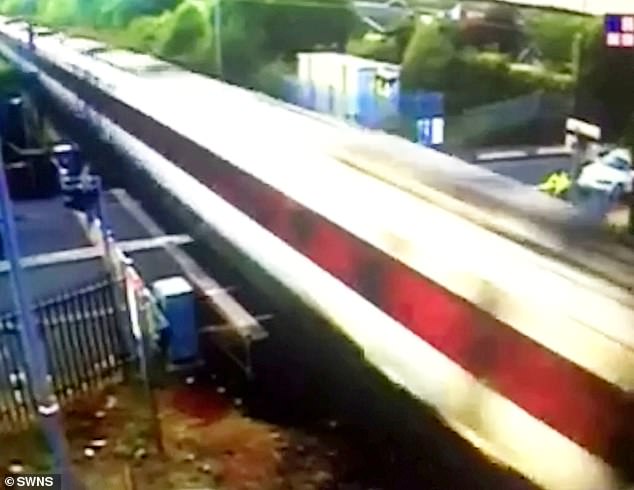 CCTV footage shows the moment an LNER Azuma train at the Rossington level crossing on the East Coast Main Line near Doncaster, South Yorkshire, was speeding by on June 13

A neighbour of Rochford’s mother overheard him asking family members to ‘not tell anyone where I was’.

He changed his clothes at the property before being collected by his girlfriend.

Police who interviewed him at his own home said he ‘seemed nervous’ and a check of the football club’s CCTV established he had driven the Range Rover from the premises.

After being arrested, he admitted that the car had not been stolen and that he had lied.

The court was told the collision led to over 15 hours of delays on the main route from London to Edinburgh and cost the railway industry £345,000.

One passenger on the Azuma gave a victim impact statement in which he said he still suffered serious pain from his injuries and was reluctant to travel by train again.

And Geoffrey Shaw, who had lived in his trackside property for over 40 years, said he had been ‘severely shaken’ after the falling pole missed him by just 1ft. 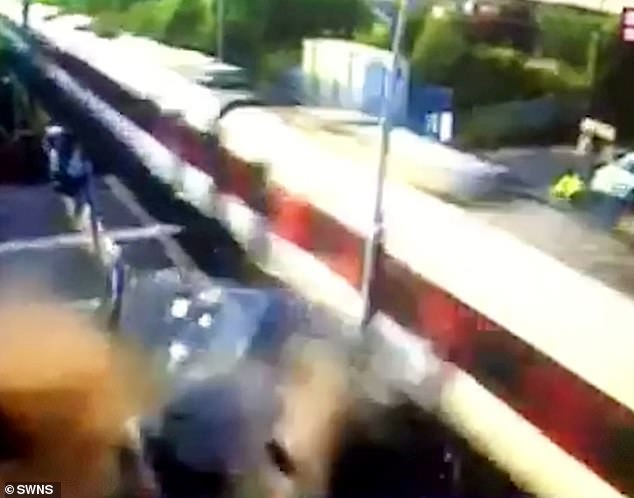 Out of nowhere, Michael Rochford’s Range Rover collides with the train, sending a pillar of dust into the air

Rochford became the main provider for his mother following his parents’ separation, his legal team said.

The court heard Rochford reacted as he did because of ‘sheer panic’ as he had never been in trouble with the police before.

Judge Jeremy Richardson QC, the Recorder of Sheffield, said: ‘You drank heavily and took leave of your senses.

‘You could have caused a major catastrophe where many people would have lost their lives. It is a very serious case.

‘I accept that you are filled with remorse and I have been invited by your solicitor not to ‘crush’ you.

‘Prison will fall very hard upon you. It is a great tragedy that you find yourself in the position that you are in.’ 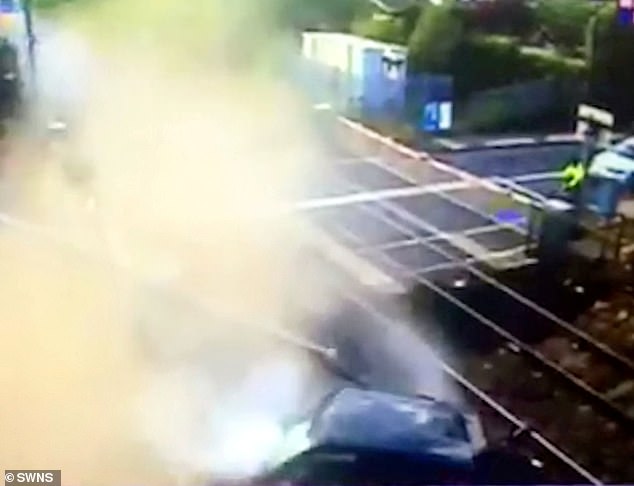 After hitting the train, the car is spun round and has smoke rising out from beneath its bonnet. The train sustained damage while several passengers suffered whiplash injuries and a man in a nearby garden narrowly missed being struck by falling debris

Rochford joined Network Rail on a signalling apprenticeship in York in 2013 before moving across to the signalling fault department in Sheffield in 2016.

He had worked in the rail industry since leaving Hayfield School in Doncaster in 2011, when he was an apprentice at a private sector engineering firm.

Paul Rutter, route director for Network Rail’s East Coast route, said: ‘This was a shocking incident which could have caused serious injury to passengers and rail workers.

‘Thankfully, this wasn’t the case, but this incident acts as a stark reminder of just how important it is to respect the railway and use level crossings safely.’

Rochford was also banned from driving for four years by Sheffield Crown Court.

‘This collision could have ended with catastrophic results.

‘The sentence handed down by Sheffield Crown Court shows how serious these offences have been taken, resulting in a significant prison sentence and a driving ban that will see him off the road for four years.

‘Our investigation showed the extent Rochford went to in the lies he told on the night to police which resulted in him being charged with perverting the course of justice.’