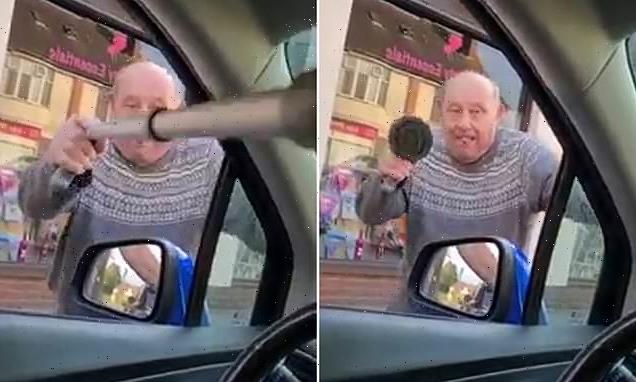 This is the shocking moment a furious pensioner uses his walking stick as a weapon to jab a woman through a car window after getting into a road rage row with her husband.

The elderly man, referred to as ‘Sid’ in the video, can be seen suddenly turning his attention towards 56-year-old Ali Lewis, and lashing out at her after she began filming the confrontation at around 6.40pm on August 27.

The couple had been picking up a Chinese takeaway when tempers flared up between the two men in Ringwood, Hampshire.

The woman’s husband, Antony Lewis, 62, said that he tooted his horn at the elderly man for driving too slowly and holding traffic up.

But the pensioner was not happy with Mr Lewis and pulled over to confront him for getting too close to his car. As both men clashed, Ms Lewis began filming the altercation.

Although ‘shaken up’, she was uninjured despite the violent lunge towards her. The jab narrowly missed her face but Ms Lewis claims that her £400 Galaxy S20 phone was left broken.

Speaking after the incident, Ms Lewis, a retail worker, said: ‘It did shake me up. You don’t expect that. Afterwards I was thinking if I’d been quick I could’ve grabbed his walking stick and pulled it away.

Meanwhile her husband, a retail manager, explained what happened to spark the altercation. He said: ‘We were going down a road with a 30-mph limit and I got stuck behind this car in front doing 5mph.

‘You shouldn’t be on the road at that speed, so I gave him a toot with the horn. Then he slammed his brakes on and came to a complete stop in the middle of the road.

‘He gets out and comes charging over, ranting and raving and says “you’re driving like a c***”. So, I said to my wife ‘video this idiot’.

‘Then he took the stick and smacked it into her phone and broke it. It was a clear assault. Luckily he missed her face. It could’ve been a lot worse.

‘If my wife had been hurt I would’ve lost it, I don’t care how many witnesses there were.

Mr Lewis confirmed that they will not go to the police with it. He showed the video to an officer in town but was told that there was not enough evidence to prosecute him.

‘I felt sorry for his wife because he’s an embarrassment,’ he said in a parting blow.

A woman, thought to be the attacker’s wife, was left mortified by the incident and can be heard shouting at him, ‘Who the bloody hell do you think you are?’. 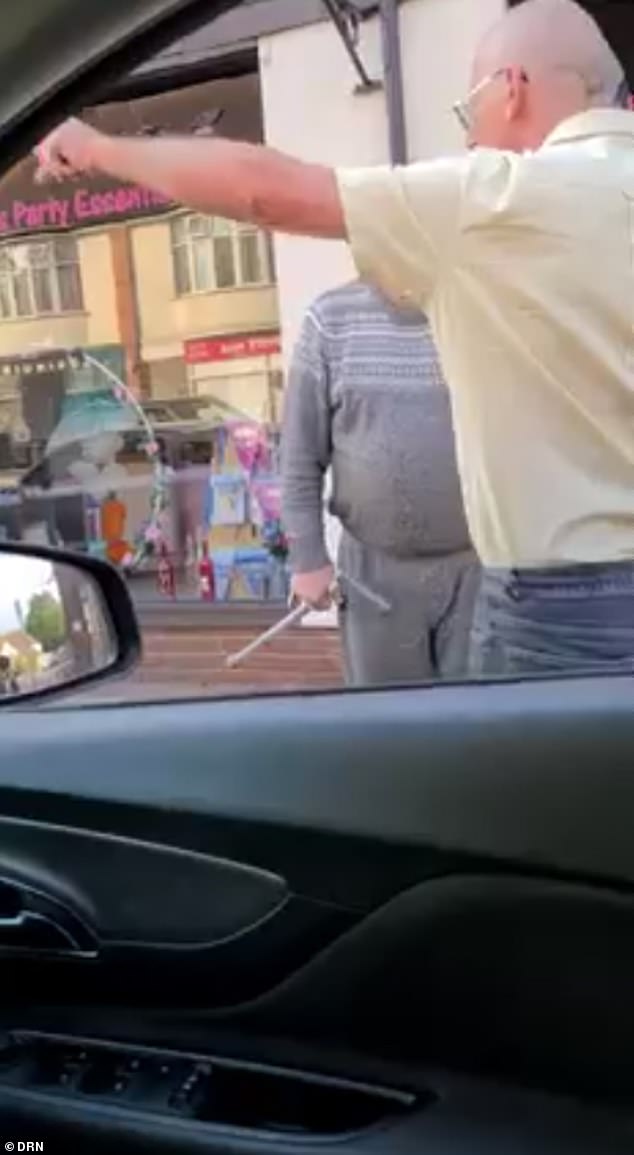 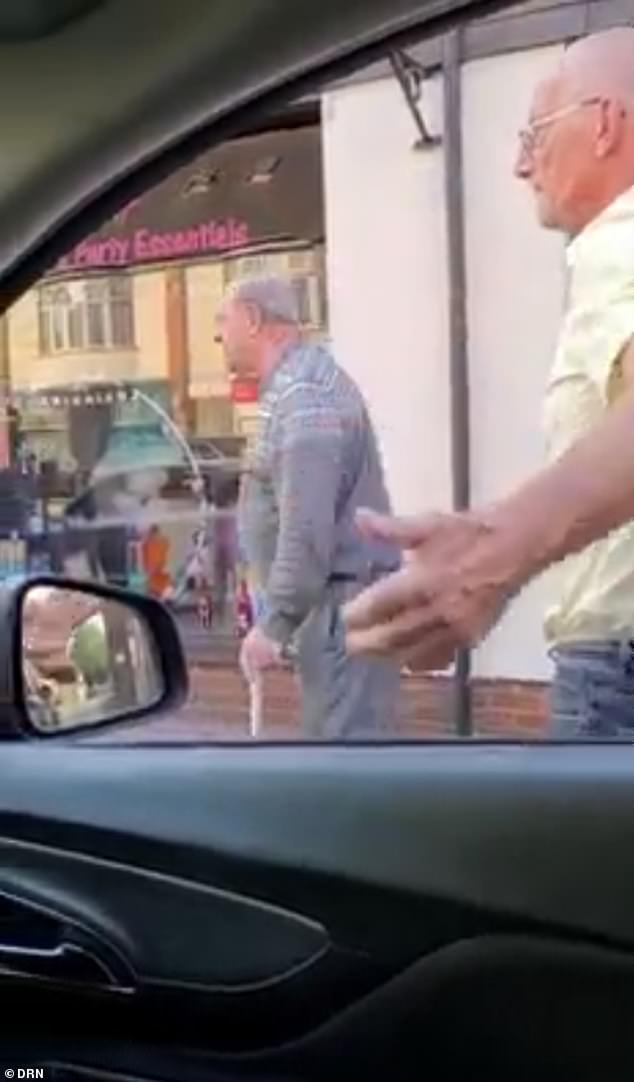 The pair can be seen turning towards the woman, thought to be ‘Sid’s’ wife, who is furious with what he has just done to Ms Lewis

At the start of the video, the pensioner can be seen pointing at the road and shouting ‘too close’ at Mr Lewis.

But it escalated even further when the man spotted Ms Lewis filming from the passenger seat which sparked him to jab his walking stick through the window, aiming at her phone.

Mr Lewis can be heard shouting, ‘Oi, get out my car, that’s assault on my wife now’ in response to the attack.

The pensioner showed no remorse at the time as he squared up to Mr Lewis and said: ‘She’s taking pictures of me.’

Mr Lewis, unhappy with the man’s attack on his wife, responded: ‘Course she is, you’re acting like an idiot. Go away.’

But the riled up man was enraged and can be heard telling him to ‘p*** off’. He is last seen reluctantly storming off as the woman he is with shouts, ‘Sid, for God’s sake, shut up. Who the b***** hell do you think you are?’

Hampshire Constabulary confirmed it had not received a formal complaint about the incident.