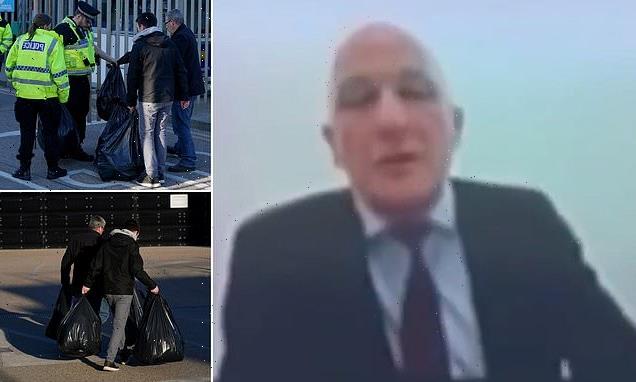 ‘I’m sorry to inform you that your contact is TERMINATED’: Moment P&O Ferries chief told 800 staff they were ALL being made redundant over Zoom

This is the moment a P&O Ferries chief told hundreds of staff members they were no longer employed and were being made redundant over a Zoom call.

In a virtual meeting held on Thursday morning, P&O Ferries fired 800 seafarers as it is ‘not a viable business’ in its current state.

The manner in which staff were told left crew members reeling, with workers describing it as ‘brutal’, ‘unfair’ and leaving them feel like they were just a number to the company.

The firm said it has suspended sailings ‘for the next few days’ while Transport Secretary Roubert Courts warned passengers to expect up to 10 days of disruption.

Coaches carrying agency workers hired to replace them were seen parked near ships at ports.

The senior P&O manager told seafarers on Thursday: ‘The company has made the decision that its vessels going forward will be primarily crewed by a third-party crew provider.

Read the full transcript below 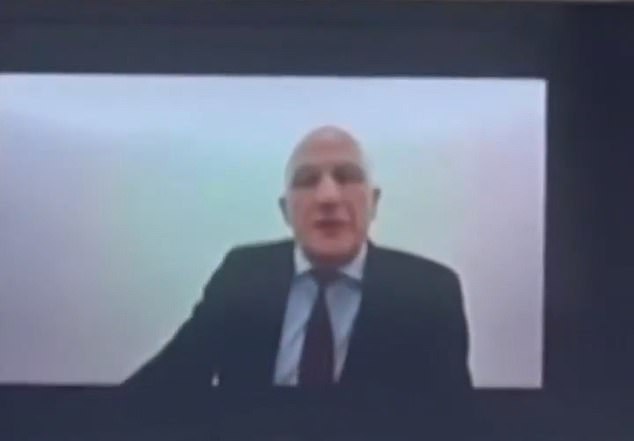 Pictured: This is the moment a P&O Ferries chief told hundreds of staff members they were no longer employed and were being made redundant with immediate effect over a Zoom call

‘Therefore, I am sorry to inform you that this means your employment is terminated with immediate effect on the grounds of redundancy.’

The call lasted just over 3 minutes and Mr Goode said he was unable to take questions ‘for obvious reasons’.

He added: ‘I do accept that there are no words that can make this situation any better today. I realise that this will have come as a shock to you and P&O Ferries will provide you with all the ongoing support possible.’

The decision and the manner in which it was delivered sparked outrage from workers, politicians and union leaders.

One worker slammed the ferry firm for ‘scheming behind closed doors before stabbing us in the back’.

The father-of-two in his 20s, who lives in Dover and wanted to remain anonymous to protect his redundancy package, said: ‘I had to switch it off.

‘I couldn’t watch it to the end. Within about a minute and a half of being on it, they told us we were being sacked.

‘I can’t even remember exactly what he said as it’s all a blur. But I just turned it off there and then. 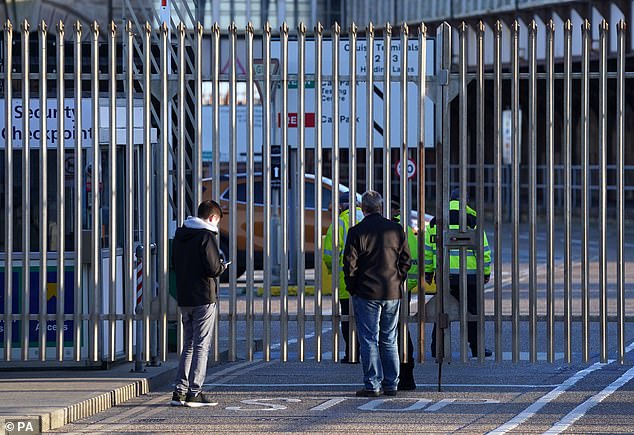 ‘I had a few texts and emails from people with rumours circulating as there were photos of crews waiting to join the ships before getting the email at 10.30am.

‘They claim the company is running at a loss of £100million but DP World that runs it from Dubai is thriving.

‘What they want is British seafarers gone as we’re too expensive as far as they’re concerned and stand up for our rights.

‘We’ve already been replaced. The new foreign workers are already on board. And I’ve got nothing against them.

‘But clearly the company has been planning this behind our backs for a very long time to already have a new workforce in place. They’ve been scheming behind closed doors before stabbing us in the back.

‘It’s not fair. We should have been given notice and deserved a proper heads up. Not half an hour. Most of us are young parents with mortgages to pay and children to feed. 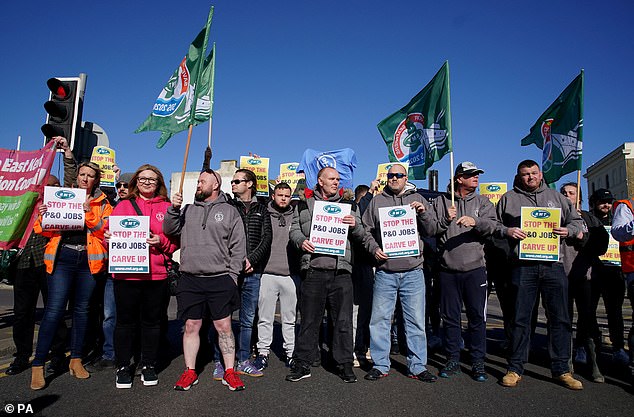 ‘Channel House is the death of us. That’s the head office where there’s about 300 staff all on 50k up who wouldn’t know what a ship looked like it if hit them in the face.’

Staff ran into the road of the A20 at 2.30pm on the York Street junction and formed a human barricade.

Many waving Save our Seafarers flags and holding ‘Stop The P&O Jobs Carve Up’ signs cheered and put their thumbs up at passing drivers hooting their horns in solidarity.

One lorry driver, wearing uniform from furniture shop Bensons for Beds, got out their cab and remonstrated: ‘I understand why you are doing this and I support you. But I have a job. I need to get to the Port of Dover.’

A single police community support officer came over five minutes later but RMT union chief Darren Procter told him: ‘We are not moving.’

He added: ‘We’re here today to make a statement. This is only the first day.. We’ve only just heard about it.

‘This is going to grow with support to make sure that UK seafarers are at the forefront of British maritime strategy and we can change P&O’s mind.

‘I’m absolutely disgusted. We’ve had people coming into our office heartbroken and crying because they’ve got young kids. Some of them have been working here 30 or 40 years to find out they’re being sacked without any consultation. 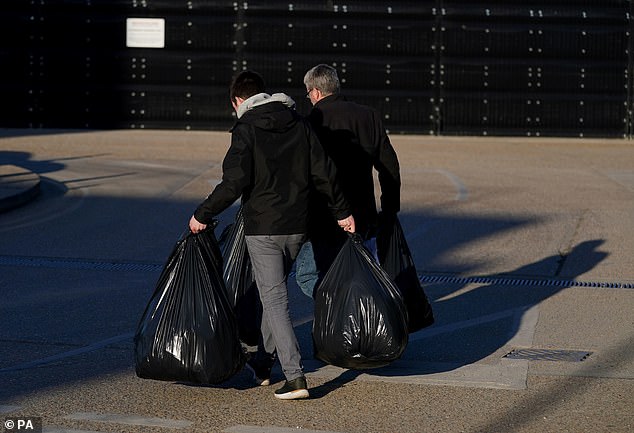 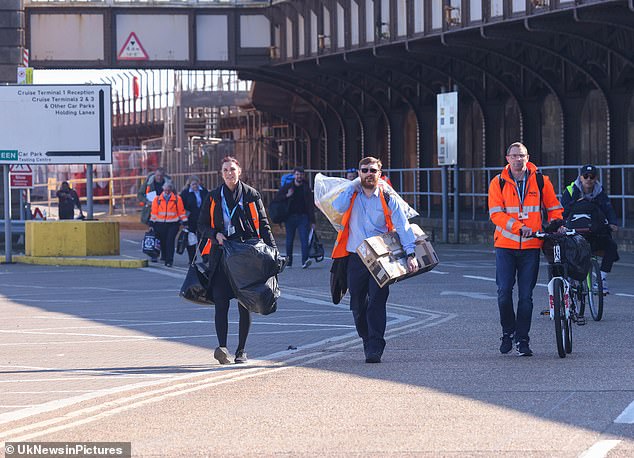 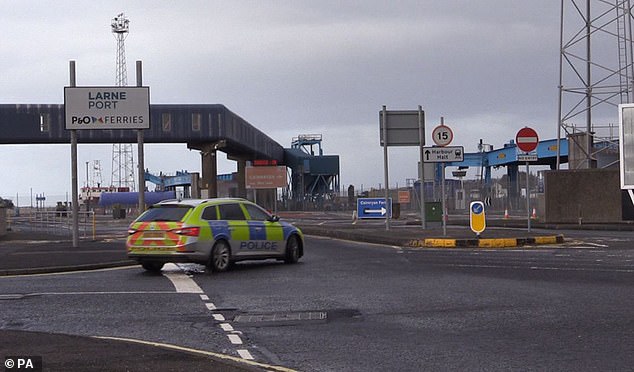 Another P&O Ferries staff member, a furious woman in her 20s, said: ‘We were sailing at Christmas. All the bigwigs got thousands of pounds in bonuses when we got nothing.

‘To P&O Ferries, we are just a number. They do not care about us.

‘It was a complete stranger telling us we no longer had jobs. It was completely scripted.

‘You could tell he was just reading a pre-written statement and then said he would not take any questions at the end. It was heartless. It was just a face on a screen.

‘The email titled “employee update” came at 10.30am for the video call where an “Important company announcement was going to be made”.

‘But by 11.08am, the new foreign crew in Rotterdam had boarded our ship. The people onboard would not have even watched the video yet. The current crew on board were watching the new staff coming on without a clue.

Another worker added: ‘It’s disgusting. The directors had kept it all hush hush. They’d only just given us all a pay rise last month too. 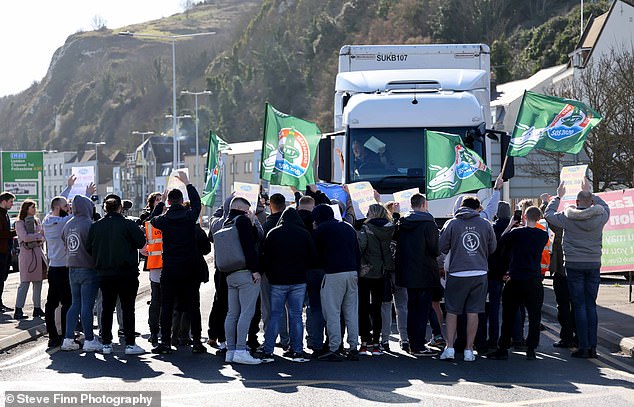 ‘They’ve said they’re going to try and help us get new jobs as agency workers. But the thing is with agency, they don’t get leave, sick pay, pension or anything. You’re not contacted and get paid a day rate so there’s no security.

‘P&O has always viewed its crew as numbers. This is just the brutal end.’

P&O Ferries said in a statement: ‘In its current state, P&O Ferries is not a viable business.

‘We have made a £100 million loss year on year, which has been covered by our parent DP World. This is not sustainable.

‘Our survival is dependent on making swift and significant changes now. Without these changes there is no future for P&O Ferries.’

It added that after ‘seriously considering all the available options’ it has taken the ‘very difficult but necessary decision’ to hand immediate severance notices to 800 seafarers.

Those fired will be compensated for the lack of notice with ‘enhanced compensation packages’.

The staffing crisis is affecting P&O Ferries, which is an entirely separate company to the holiday operator P&O Cruises.

A spokesperson for the cruise firm said: ‘Please be reassured that P&O Cruises is part of Carnival Corporation & PLC and as such is entirely unrelated to P&O Ferries.’

Revealed: Full transcript of the moment P&O Ferries workers were made redundant over Zoom call

The P&O Ferries manager told staff members: ‘I am doing this scripted which isn’t my normal style but I am ensuring that the same message has been heard by all people within the business in the same format so please accept my apologies for the rather stilted style in which I’m doing that and please bear with me.

‘As you may be aware the business has been struggling financially for the last few years and has lost around £100million each year for the last two years.

‘Whilst these losses have been covered by P&O Ferries’ parent company, DP World, it’s clearly not sustainable in the future. The business cannot continue to operate like this so it has had to consider a range of different options in order to drastically reduce costs.

‘These circumstances have resulted in a very difficult but necessary decision to restructure P&O Ferries’ workforce and operations in order to protect the future of the business.

‘This was only taken after seriously considering all available options. The company has made the decision that its vessels going forward will be primarily crewed by a third party crew provider.

‘Therefore I’m sorry to inform you that this means your employment is terminated with immediate effect on the grounds of redundancy. Your final day of employment is today.

‘P&O is offering you an enhance severance package which is well beyond the statutory requirements and the redundancy terms within your collective bargaining agreement.

‘Details of this package are in a document pack which you will receive by email today so I urge you to keep an eye on your emails for receipt of the document.

‘The enhanced severance payment will be made to you in April this year subject to you signing a settlement agreement by the 31st of March and complying in full with its terms and conditions.

‘I do accept that there are no words that can make this situation any better today. I realise that this will have come as a shock to you and P&O Ferries will provide you with all the ongoing support possible.

‘Specifically, P&O Ferries will provide you with support to get a new job at sea or ashore whether with another part of DP World, with a crewing company or in another area of work.

‘Confidential support including counselling through our employment assistance programme is available to you until June.

‘The document pack you will receive today contains additional information including questions and answers. I would advise you to read over those carefully.

‘There are details in the written pack for where you can go for more information if you have any other questions and please appreciate that I can’t take questions and answers on this call given its format for obvious reasons.

‘We will also be calling each and every one of you individually who are not onboard the vessels today in case you have further questions or further things that you need to find out from us.