The Labrador-type pets had been left in the vehicle in York city centre for a staggering 30 minutes yesterday.

The two officers at the scene said they could feel the heat coming from the car during their rescue operation.

They even said they ‘struggled to breathe’ when they were inside the car for just 30 seconds after they broke in. 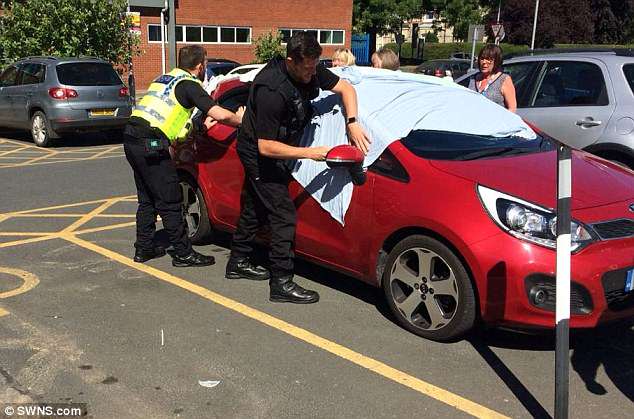 The police told how they were left with no option but to smash the window of the car to get to the distressed animals.

The rescue operation came as the nation baked in 86.2F heat yesterday, with the deadly heatwave claiming two lives in separate swimming tragedies.

The heatwave continued today with the mercury expected to hit 91F, making parts of the country hotter than Athens and Rio de Janeiro.

The two dogs were taken in by the local RSPCA where they were given cool baths. The RSPCA has indicated that they may try and prosecute the owners. 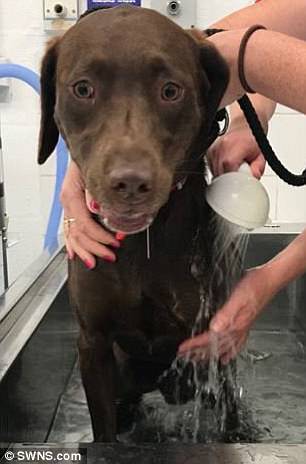 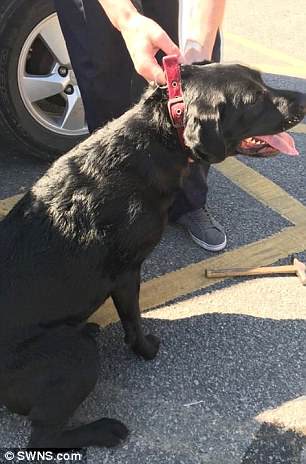 In a tweet, North Yorkshire Police said: ‘There is no excuse for this, I am utterly appalled.

‘Officers were in that car for thirty seconds and were struggling to breathe so goodness knows what these poor animals were going through.’

The top temperature yesterday was 86.2F (30.1C) at Hampton in South West London, making it the hottest day of the year so far.

The two Labrador-type dogs were then taken in by the local RSPCA where they were given cool baths. The RSPCA has indicated their intention to prosecute the owners.

According to the RSPCA, dogs should never ever be left alone in cars on warm days. 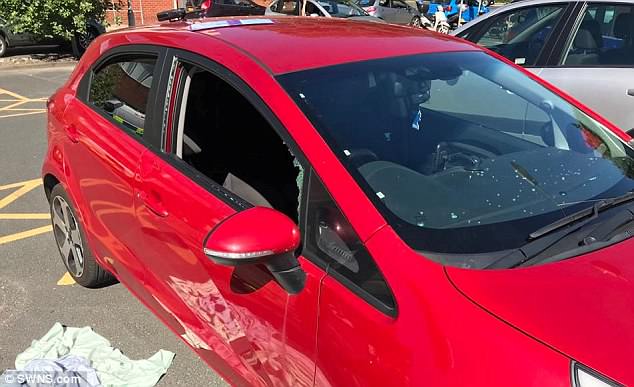 A spokesman said: ‘A car can become as hot as an oven very quickly, even when it doesn’t feel that warm.

‘When it’s 22 degrees, in a car it can reach an unbearable 47 degrees within the hour.’

The heatwave is showing no signs of stopping as commuters face a battle getting to work and back home this week.

Motorways have melted under the heat and rail providers warned of speed restrictions amid concerns that tracks will buckle in the sweltering conditions.

South Western Railway customers are facing four days of disruption as it warned that passengers travelling through London’s major transport hub at Waterloo would be delayed by the restrictions.

People relax in the sunshine on the beach in Brighton, Sussex, a favourite hotspot for sunseekers throughout the summer 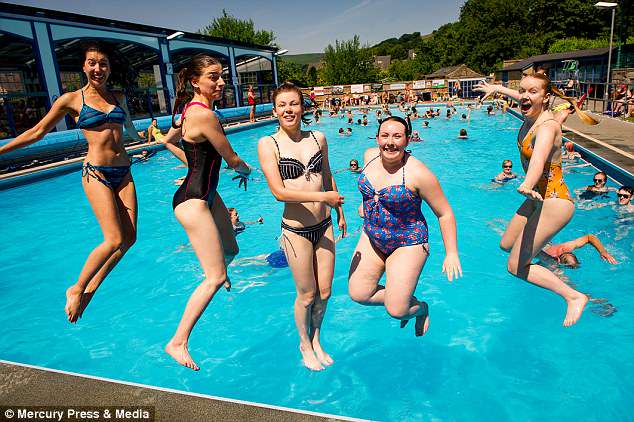 Five friends enjoy a soak in the pool at Hathersage swimming pool, in Derbyshire, with the cool water providing relief from the summer rays 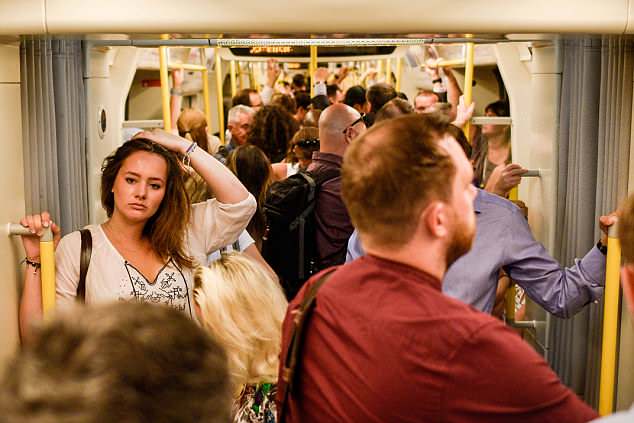 Commuters on a packed tube train deal with high temperatures during a hot day in London, with temperatures set to soar throughout the week 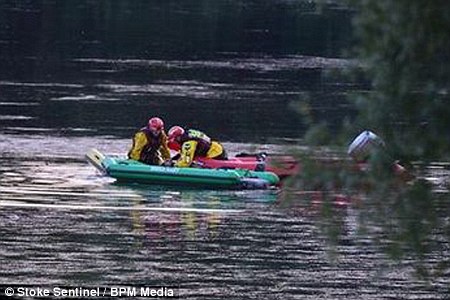 A search has resumed this morning for a missing 13-year-old boy who was seen ‘in distress’ while playing in a lake on the hottest day of the year.

Police said two other boys, one aged 12 and the other aged 13, were also spotted in difficulty in Westport Lake in Stoke-on-Trent, Staffordshire, but were able to make their way safely out the water.

Emergency crews began searching the lake this morning at 8am after it was called off late last night die to fading light.

An police helicopter was also involved in the search yesterday after emergency services were called to the scene at 4.50pm.

It came as the heatwave, which is set to reach 91F this week, claimed two lives in two separate swimming tragedies elsewhere in Britain.

In Eastbourne, East Sussex, a woman drowned in the sea and at a lake in Nutfield, Surrey, a man in his 30s died after he struggled in the ice cold water.

Staffordshire Police said today that they had resumed the search for the missing child in Westport Lake.

Police said the identities of the children are known to them and officers are in contact with the parents.

Yesterday police were called to Mercer’s Lake in Nutfield, Surrey, at 6.30pm when eyewitnesses spotted a man getting into difficulties in the water.

He was said to be 100 metres from the edge of the lake when he started to struggle in the freezing water. 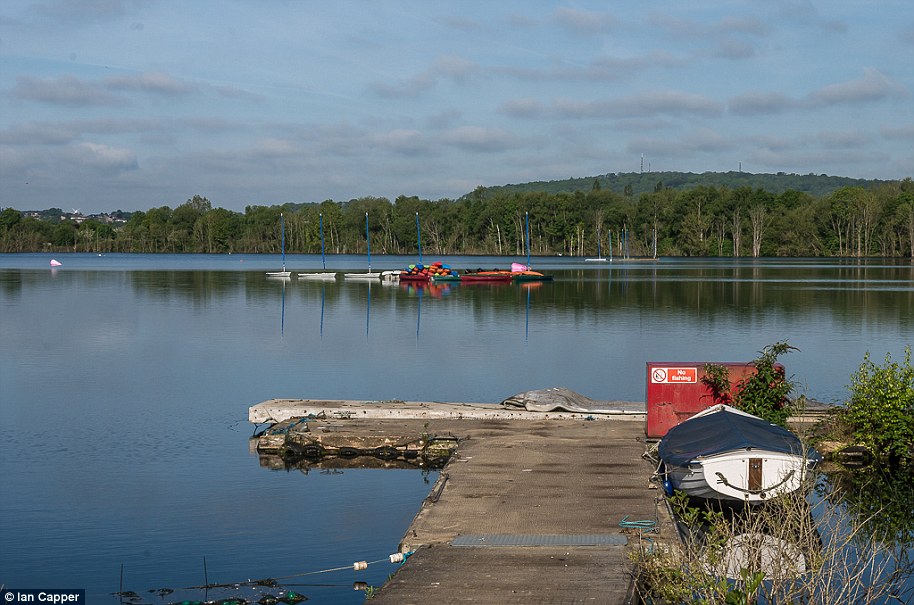 Yesterday police were called to Mercer’s Lake in Nutfield, Surrey, at 6.30pm when eyewitnesses spotted a man getting into difficulties in the water

A search was launched, including Surrey Fire and Rescue Service’s water search team and Surrey Search and Rescue, and his body was found by a team of divers from rescue service Specialist Group International at 9.20pm.

The victim has not yet been named and police said they are working to contact his next of kin. A post mortem is expected to be carried out in due course.

In Eastbourne police are investigating the death of a woman who drowned while swimming in the sea.

Coastguards, paramedics and police were called to the beach near the resort’s Western Parade after the victim was pulled from the water and onto the beach by rescuers who saw that she was in trouble.

An ambulance crew was escorted onto the beach and tried unsuccessfully to resuscitate the woman who was pronounced dead at the scene.

Her body was transferred from the beach to a lifeboat which had been launched to assist and she was taken to the nearby lifeboat station.

Heatwave temperatures also caused chaos for motorists on the M5 as a newly-surfaced road failed to set, closing the motorway in one direction at Weston-Super-Mare, North Somerset, with one lane to remain shut all day.

When is it too hot to work in the UK?

There’s no law for minimum or maximum working temperatures.

However, guidance suggests a minimum of 16C or 13C if employees are doing physical work.

There’s no guidance for a maximum temperature limit, despite many UK offices not having air conditioning.

Employers must stick to health and safety at work law, however.

The relaxed rules state that employees should talk to their employer if the workplace temperature is not comfortable.

Health officials have warned families about the dangers of swimming in open water as the frantic search resumed this morning for a boy, 13, who has been missing from Westport Lake in Staffordshire since yesterday afternoon.

It comes as two people drowned yesterday while cooling down during the hottest day of the year so far.

A man in his thirties died after getting into difficulty while swimming 300 feet from the shore at a lake near Merstham, Surrey, while a woman also drowned at Eastbourne beach in East Sussex.

Coastguards, paramedics and police were called to the beach near the resort’s Western Parade after the victim was pulled from the water and onto the beach by rescuers who saw that she was in trouble.

An ambulance crew was escorted onto the beach and tried unsuccessfully to resuscitate the woman who was certified dead at the scene.

Her body was transferred from the beach to a lifeboat which had been launched to assist and she was taken to the nearby lifeboat station. 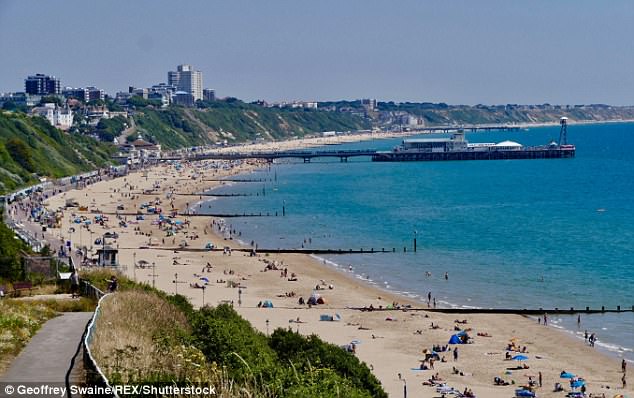 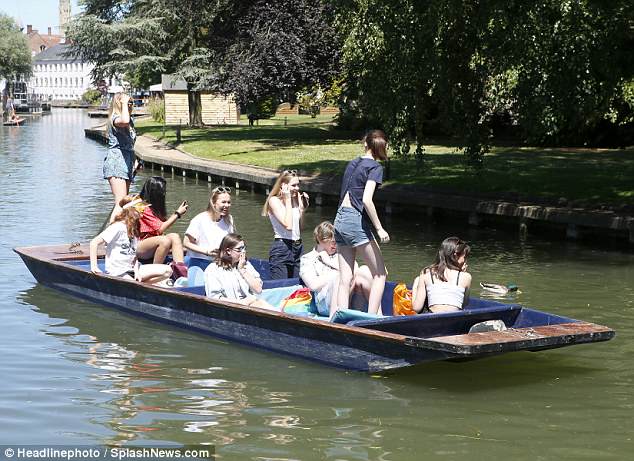 It is the second death this week, after a man drowned in a lake in Surrey when the freezing cold water was believed to have affected his limbs which left him struggling in the water.

Passers-by called for help after seeing the swimmer in trouble prompting an emergency services to descend on the pretty lake to try to rescue the man.