Animal rights activists are demanding an end to brain experiments on monkeys at a Belgian university where the primates have boreholes drilled into their skulls.

Monkeys at KU Leuven have electrodes implanted in their brains and rods attached to their heads with cement, according to Dutch lobby group Animal Rights.

Activists say 12 rhesus monkeys will be subjected to the tests and most of them will be killed when the taxpayer-funded experiments are complete.

The university says the use of animals is necessary – pointing to breakthroughs in Alzheimer’s research that have been achieved with monkey experiments. 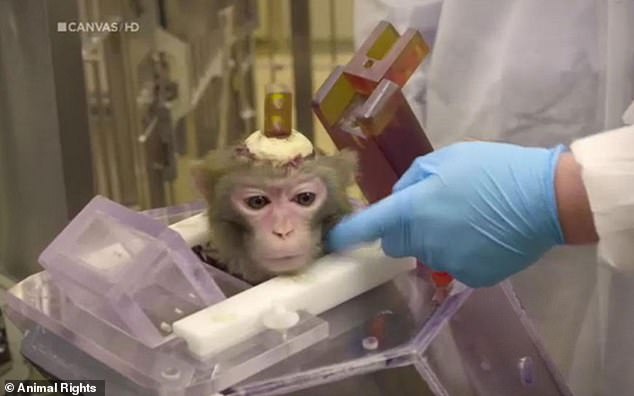 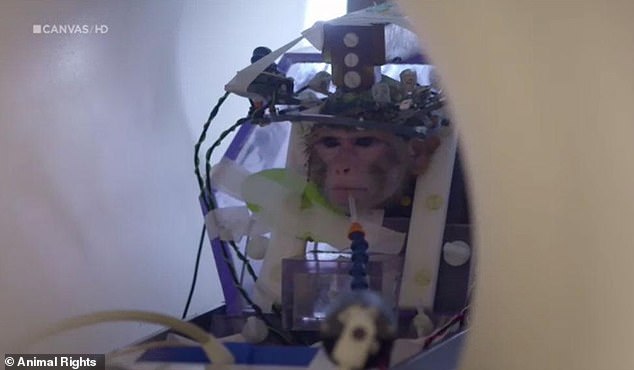 Campaigner Jen Hochmuth condemned the use of monkeys as ‘useless and cruel experiments that only serve to satisfy the curiosity of scientists lacking compassion’.

‘The brain experiments on monkeys are not a necessary evil but plain evil,’ she added.

Animal Rights said the researchers were benefiting from a €1.8million subsidy from Flemish taxpayers towards their controversial experiments.

In addition to the 12 monkeys in this experiment, the university has dozens more of the animals locked up in its laboratories, the activists claim.

‘The brain experiments cause the monkeys a lot of suffering,’ the group said as it urged people to sign a petition calling for the monkeys to be freed

‘In order to be able to measure their brain activity, all test monkeys are made “ready for use”.

‘Electrodes are implanted into the brain via boreholes in their skulls. Cement is used to attach a fixation rod or “hat” to the skull.

‘This rod serves to fix the head of the monkeys during later brain measurements. The animals have to go through heavy training programmes for months and are put on strict water diets to force them to cooperate with the researchers.’

KU Leuven says on its website that ‘unfortunately, there are not enough good alternatives’ to replace lab animals that are used in brain research.

‘Certain processes can be studied in test tubes. Some studies can be done on humans. In other cases, animals are necessary,’ the university argues. 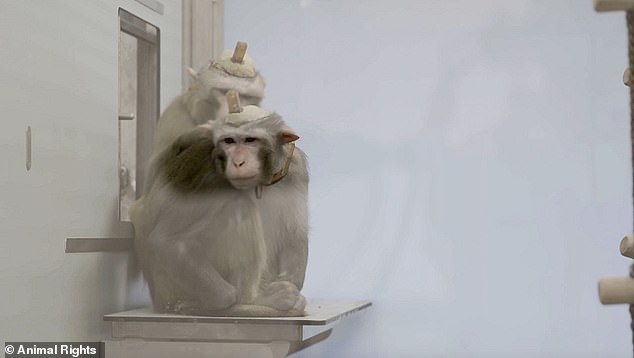 Research on ‘complex brain functions’ can only be done on monkey species because other animals do not have such functions, it says.

Scientists say that tests on monkeys have confirmed a link between Alzheimer’s and other problems such as obesity, brain injury and physical inactivity.

Alzheimer’s medication that is currently being tested on humans has been cleared as safe because it was previously tested on monkeys, they say.

‘Laboratory animals are well cared for and housed in the best possible circumstances,’ the university insists.

‘They live in small groups with enough enrichment to keep them busy. Good care and housing is not only important for the animals but also to guarantee the quality of research.

‘Only if animals have been able to develop their natural capabilities can meaningful research be carried out on them. Monkeys have very spacious housing, where their natural environment is mimicked as much as possible.’