(Reuters) – Dozens of jade miners killed in a landslide in northern Myanmar were buried on Saturday, a local official said, after 77 were interred in a mass grave on Friday in one of the worst mining accidents in the country’s history. 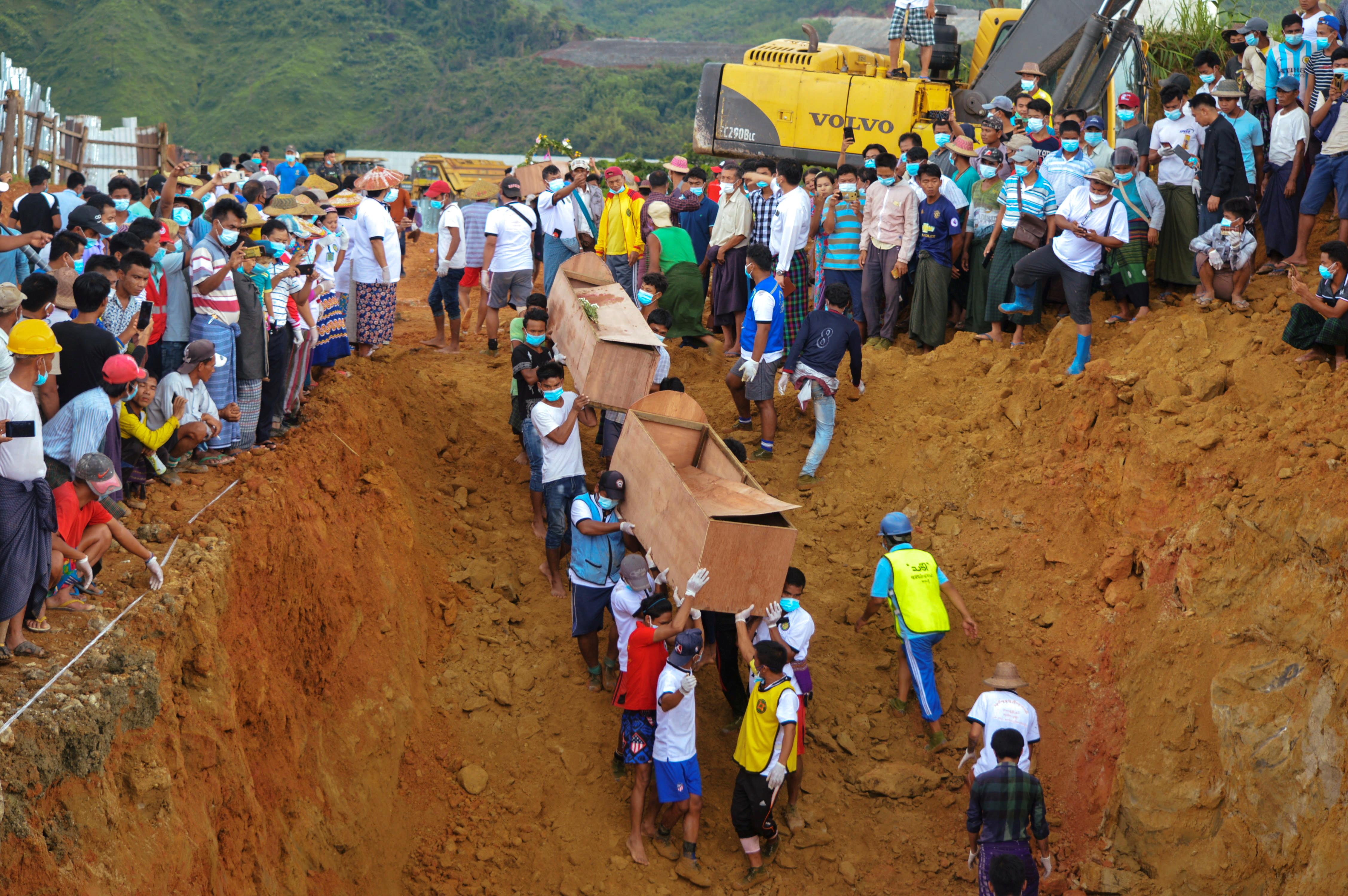 More than 170 people, many of them migrants seeking their fortune in the jade-rich Hpakant area of Kachin state, died after mining waste collapsed into a lake on Thursday, triggering a surge of mud and water.

The miners were collecting stones in Hpakant, the centre of Myanmar’s secretive billion-dollar jade industry, when the wave crashed onto them, entombing them under a layer of mud.

Thar Lin Maung, a local official from the information ministry, told Reuters by phone 171 bodies had been pulled out but more were floating to the surface.

He said the 77 people buried on Friday had been identified. Another 41 were interred on Saturday, another local official said. Volunteers carried plywood coffins and placed them into a mass grave carved out by diggers close to the mine site.

Dozens more were cremated in line with Buddhist traditions at a cemetery on a hillside. Among them was 21-year-old Saw Myint Tun, a university student who had travelled hundreds of miles from his home in Rakhine state, his family told Reuters.

His brother-in-law, Hla Shwe Win, said one of his brothers had also died in the disaster, while another was wounded.

They had followed him to Hpakant to work in the mines, Hla Shwe Win said, as women wept over the coffin before it was burned in line with Buddhist traditions.

“They came here, counting on me,” he told Reuters, saying there were no words to describe how he felt.

Many other bodies, battered and stripped of their clothing by the force of the wave that hit them, have not been identified.

Myanmar supplies 90% of the world’s jade, the vast majority exported to neighbouring China, which borders Kachin state. Deadly landslides and other accidents are common in the mines, which draw impoverished workers from across Myanmar.

About 100 people were killed in a 2015 collapse that led to calls to regulate the industry. Another 50 died in 2019. Thursday’s landslide was the worst in memory.

Myanmar’s leader, Aung San Suu Kyi, on Friday blamed the disaster on joblessness in the country, lamenting in a Facebook Live broadcast that informal workers had to go to the mines for lack of other employment.

The government announced the formation of a committee to investigate the disaster.

Activists say little has changed in the industry, despite a pledge from Suu Kyi’s government to clean it up when she took power in 2016.

Rights group Global Witness said the landslide was a “damning indictment of the government’s failure to curb reckless and irresponsible mining practices.”

“Neither a promised new Gemstone law, passed by parliament in 2019, nor a Gemstone policy that has been in production for several years have yet been implemented,” the group said in a statement.

It says the trade is worth billions of dollars a year, funds it says fuel armed conflict between government troops and ethnic Kachin rebels fighting for greater autonomy for the region.