More than four in 10 Britons believe the hardcore coronavirus lockdown that brought the country to a standstill  has made their live better in some ways, new figures reveal today.

Of the 43 per cent who reported positive lifestyle changes, more than half (56 per cent) said they were able to spend more quality time with loved ones they live with, according to the Office for National Statistics (ONS).

Almost a quarter (24 per cent) said that working from home had been the best aspect of the lockdown.

The outbreak has also prompted 28 per cent of adults to plan ‘big changes’ in their lives once the nation has fully recovered. 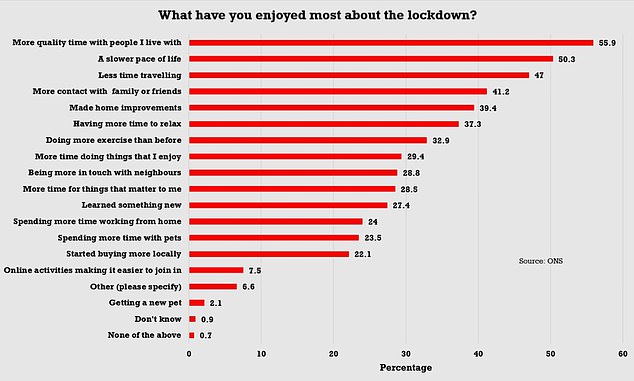 Men working in factories or as security guards were being killed by coronavirus at more than twice the rate of healthcare staff during the height of the crisis in Britain, shock official data shows.

ONS figures released today show that male nurses and doctors – who were treating the sickest Covid-19 patients, many without proper protective gear – died at a rate of 30 per 100,000 men.

The ONS says its data does not prove these jobs are more dangerous than working in hospitals because its report did not look at what ethnicity the victims were, or if they came from a deprived area – both risk factors for Covid.

But factory workers have been working throughout the crisis to keep the nation fed during lockdown, and are among the most likely to have been interacting with others when the disease was spreading at its fastest.

Security guards had to be deployed to supermarkets at the very beginning of the outbreak to make sure social distancing was adhered to inside shops and in outdoor queues.

The ONS analysed responses from 1,920 adults questioned between June 18 and 21 as part of its Opinions and Lifestyle Survey on the impact of Covid-19.

However, 47 per cent of respondents said their wellbeing had been affected by the pandemic, while a quarter said they felt lonely often or some of the time during the previous seven days – proportions similar to the previous week.

More than half (52 per cent) of those in the older age group whose lives had changed for the better said they were more in touch with their neighbours and that life had slowed down, while 47 per cent said they were speaking more with family and friends.

Overall, a third of people who reported positive changes said they had been able to exercise more during the pandemic, and almost all (96 per cent) want to maintain their increased activity levels.

Of those spending more quality time with the people they live with, 86 per cent said they want this to continue after the pandemic.

The survey is the first in the series since non-essential shops were allowed to open in England on June 15, and it became mandatory to wear face masks on public transport on the same date.

Shops in Wales and Scotland were permitted to reopen on June 22 and 29 respectively.

Some 12 per cent of adults said they had shopped for non-essential items such as clothes and furniture in the last seven days.

Of those who used public transport in the last week, 86 per cent had worn a face covering, up from 62 per cent the previous week.

The proportion of adults saying their children were now attending school has also risen.

More than three-quarters of those with school-aged children said they are attending school ‘some or all of the time’, up from 67 per cent the previous week.