“Parliament wasn’t [originally] made for people of colour like me,” the Sudanese-Australian Lyndale Secondary College student said. But that’s empowered her to stand up in Youth Parliament and take charge because, she says, “this wasn’t an opportunity given to my ancestors”. 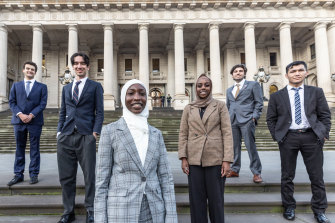 She’s one of 120 young people – 51 per cent of whom are not yet old enough to vote – who packed both chambers of Victoria’s parliament this week.

Youth Parliament brings together 16 to 25-year-olds from across the state to research and draft bills on issues they are passionate about before debating them to mimic actual parliament. Those bills are then passed onto Youth Minister Ros Spence to consider.

In the program’s 36-year history, about 32 bills have passed into legislation, including the over-the-counter morning after pill, compulsory bike helmets and the introduction of recycling bins alongside standard bins in the CBD.

This year’s parliament passed bills calling for a train line to Mildura, compulsory counselling sessions for secondary school students, as well as sustainability, safety, youth justice, gambling reforms and a bill to extend support for young people with an out-of-home care experience until the age of 25.

Young people are much more committed and capable than we publicly perceive them to be.

Daoud, who formed part of a group of African-Australian students from schools in Melbourne’s north, put forward a bill to address “inherent structural and systematic racism” which she says is faced by African-Australians in the education system. The bill proposes the establishment of a young African-Australian community ambassador program.

Under the proposal, the ambassadors would lead a statewide cultural education reform “resulting in demographic-specific education and opportunities for all African identifying Victorian students”.

The bill stated that Victorians use public transport to commute to essential services and when concession cardholders did not have enough money to pay for their journeys, it can be fraught with stress.

“People who have limited access to income, they are struggling the most. If they can save on public transport they can spend that on other essential items they need,” Hughes said.

Kergen Angel, 24, who was elected by last year’s Youth Parliament to be Victoria’s Youth Governor, said for some young people, speaking in parliament was like “being in [Harry Potter’s] Ministry of Magic” and that they now felt they had “the right to have [their] voice heard”.

Angel said every young person had to have a full, complete and engaging civics education. The fact that 32 bills had passed into legislation was a testament to the fact young that people had an important part to play in politics, he said.

Daoud said Youth Parliament has “definitely changed my life” and changed her view on “how much change I can actually make.”

A spokesperson for the Department of Education said Youth Parliament was a great way for young people to engage and raise issues which are important.

Speaking to Daoud’s proposal for youth ambassadors, the spokesperson said that “the health and safety of all students is our number one priority, and all staff and students have a right to learn in a safe and supportive environment, free from racism”.