A 37-year-old Michigan woman has been arrested after three young girls were found alone in her locked minivan on what would become the hottest day so far this year.

The woman was shopping in Clinton Township when police were called about 9am on Sunday and rescued her two daughters and a niece, ages two, three and six. The van’s front windows were opened slightly.

The National Weather Service says the temperature was about 77 degrees at the time. It reached 96 degrees Sunday in the Detroit area. 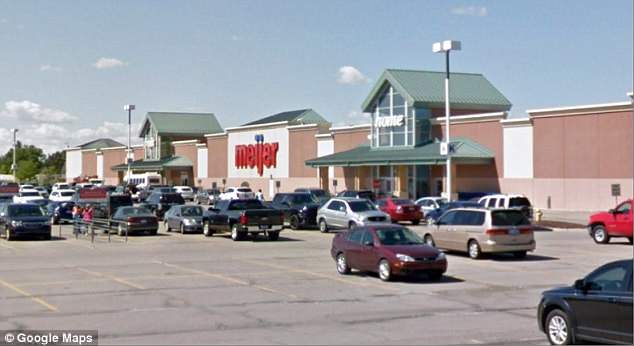 A 37-year-old Michigan woman has been charged with child abuse after police rescued three girls, ages 2, 3, and 6, from her locked van outside this Meijer supermarket in Clinton Township

One of the officers reported being hit with a blast of hot air from the interior of the van after opening the door, according to Macomb Daily. He offered the children a drink of water and removed them from the overheated vehicle.

When police found the owner of the van inside the Meijer supermarket, she claimed that she had been shopping for just 10 minutes, and that she had gone outside to check on the kids.

However, when officers reviewed security video from store, it showed the mother, who lives in Mount Clemens, was inside for about 25 minutes, and she never went back to the van to check on the kids.

She is the mother to two of the children and an aunt to the third.

The mother was arrested on misdemeanor counts of child abuse – leaving a child unattended in a vehicle. She was released Sunday after posting $500 bond.

All three children are now staying with an aunt.