A mother has slammed a pathetic vegan breakfast served at Center Parcs that cost £10 – the same as a hearty full English.

Jennifer Carr, 37, bought the meagre meal during a trip to the Sports Cafe at the holiday park in Sherwood Forest.

The £9.99 dish included half of a cooked tomato, half a slice of toast, one mushroom, two hash browns, beans and four slices of red pepper.

But Jennifer’s son, who bought a meat version of the breakfast for the same price, appeared to have a much fuller plate. 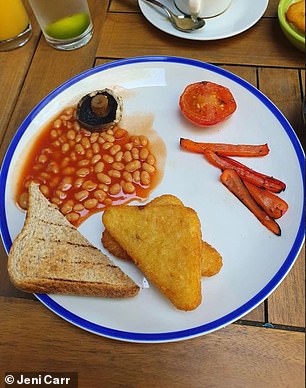 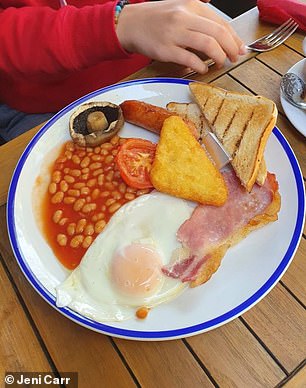 Jennifer Carr’s vegan meal which she bought for £9.99, left, and her son’s meat version of the breakfast for the same price, right. The mother, 37, said she was left ‘starving’ afterwards

His meal included a slice of toast, half a tomato, one mushroom, beans, a hashbrown, one sausage, egg and a piece of bacon.

Jennifer also expressed her disappointment over a vegan dish at the park’s Pancake House, describing it as raw and just vegetables served inside a crepe.

The mother from Stirling, Scotland, said her and her husband, who is also vegan, were left ‘starving’ after the meal, which they ordered via an app under the park’s new coronavirus measures.

She told Sun Online Travel: ‘I was really quite shocked. It was pretty small, so we had to order extra mushrooms, beans and tomatoes on top.

‘When we ordered on the app, it gave us the option of making the vegetarian breakfast vegan so we chose that, but that just meant they removed the egg and the vegetarian sausage and substituted them with four small slices of pepper – not even an extra mushroom.

‘I looked at it and thought, I’ve paid ten pounds for this, and we were starving afterwards.’ 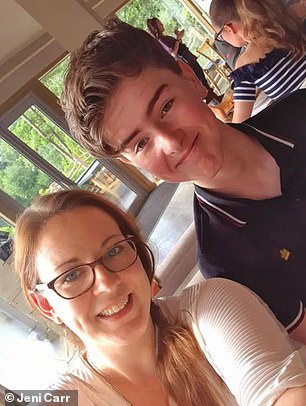 Despite the measly portion, Jennifer praised the park’s staff and hygiene measures introduced to prevent the spread of Covid-19.

It follows Center Parcs reopening its five UK holiday villages on July 13 – more than three months after it was forced to close due to the pandemic.

The leisure company, which announced it would be closing its sites temporarily from March 20 amid the ‘exceptional circumstances’, is once again welcoming guests to its villages.

The company’s bosses added that the Subtropical Swimming Paradise and Aqua Sana Spa areas would remain off limits until July 27 in line with government advice.

However those looking to use the pool from this date will only be able to book two slots, each of which last two hours, if they are on a three or four-night holiday.

They will also need to arrive 15 minutes before their booked session with their swimwear underneath their clothes.